Blogs are meant to be an up to date account of what the author is doing and thinking......but I fail miserably as I still have games from 2018 and 2019 I should be recording!......One day. But today  I am "up to date" as this was a lovely game which Ken Marshall and I managed to sneak in at the end of October just before Boris announced a new UK nationwide lockdown!

Ken offered to organise it and he came up with a battlefield sketch map which I did my best to recreate on my 8 x 6 table not knowing what it was. He asked for suggestions and I thought a bridge and roads leading to the village and hills would add flexibility. He instructed that the hills should be steep, the river impassable, and the woods only penetrable by light troops on foot.

I found out later that he had several ideas up his sleeve but on the day I opted for what he called the "standard attack and defence scenario" little knowing that this would turn out to be Ken's take on the battle of Sandershausen, between the French and Allies in 1758. Since we both have armies that are Imagi-nations, but heavily based on real regiments, he fielded a Prussian style force for the attacking "French" and I chose Hanoverians, with allied light troops for the "Allies". I hope this does not spoil the enjoyment of the historically-minded among my readers.

For a good account of the real historical situation and Charles Grant and Phil Olley's refight of Sandershausen, which inspired Ken, please see Part Four of Charles Grant's "Wargaming in History, Volume 1". Below is our interpretation of the tabletop for our Battle of Ellenbach.  The bridge was broken in Ken's scenario so was removed for all the later photos. 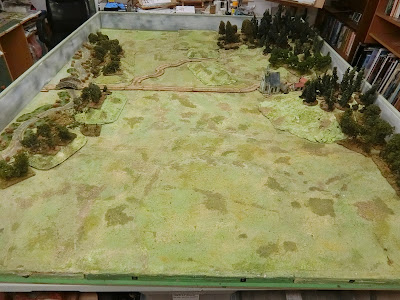 In essence my smaller Allied force had been retreating but decided to stand to fight where the valley narrowed sufficiently to make the Prussian greater numbers less effective. To win I had to hold the enemy back for 8 Moves and get most of my force away intact ( less than 50% with 3 or more hits). Ken gave me the middle third of the table (lengthways) in which to set up. I quickly realised I could just make my main line of 3 good battalions stretch along the road in the gap between Ellenbach village and the river escarpment. I had my small Hussar regiment concealed in dead ground by the broken bridge (Unit 9 marker on later photos). A unit of light troops (Grenzers) was initially concealed on each flank in the woods on high ground forward of my first line. Much of my plan was inspired by Guildford Courthouse in the American War of Independence - classic three lines of which the first was mostly militia ordered to make a show of force but retreat before things got too hot. My third line was reasonably good troops - Horse Grenadiers we classed as dragoons, a Grenadier Battalion, and a medium battery on the hill where I could fire over my first two lines for a while.
Ken decided to try the same approach with his Jager units on each flank but decided to deploy his three brigades side by side in march columns and the heavy cavalry brigade in the rear. He later said he had planned on having more space to manoeuvre as he hadn't banked on me deploying "so far forward", Well, give me an inch etc.......
As usual we were using "Honours of War" rules, as published in the book with a few local amendments. Keith Flint advises on a 30cm gap between lines as realistic spacing which is why I had spread my three lines out and deployed forward.  You can see a PDF of Ken's instructions and orders of battle for both sides here Battle of Sandershausen or in the 18th Century Historical section in the Downloads sidebar.
So Ken arrived around 10 am and by 1100 we were all set up and ready to go...... 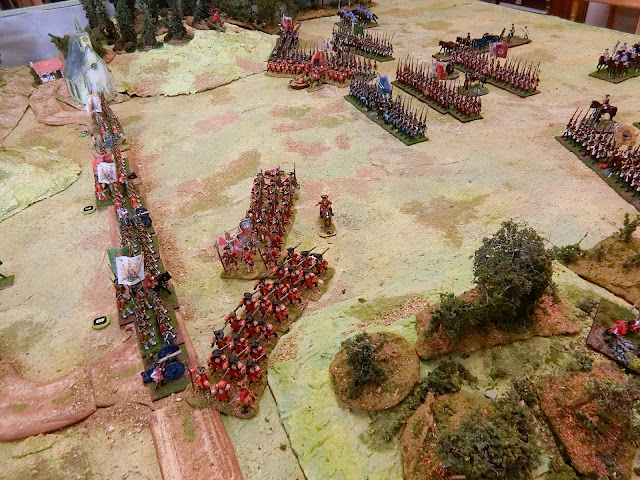 Well that was my last photo because all that happened in Move 8 was me pulling back the second and third lines further, fleeing the Hussars down the side by the river woods, and continuing the retreat towards my objective with the Militia brigade. On my left flank the Grenz unit held Ellenbach village thus intimidating a full Prussian pursuit on that side. Ken's troops looked a bit chaotic and not in a position to make quick progress.
It was 6pm and time to pack up and we had achieved Ken's 8 Move target. There was not much doubt about the winner. I'd had a few lucky breaks and exploited them while Ken had hindered himself by not deploying his guns early enough or allowing the cavalry a way through to the front. Apart from a few unlucky initiative dice you could say he was defeated by his own numbers and the bottleneck of my position. Nevertheless we both enjoyed the day immensely. We had not seen each other for over a year (there was a lot to catch up on at the pub at lunchtime) but we played at a gentlemanly and fairly leisurely pace enjoying the spectacle of a relatively simple scenario but with great variation and depth to how it could play. I do recommend you look at Ken's adaptation of this battle for HoW in my sidebar, give it a go yourselves and let us know how it plays.
Thank you Ken for all your efforts and this was a great way to get my 18th Century "fix" before a second lockdown.