The Archduke and Duchess of Beerstein: an Imagi-Nations wargamer portrait

Some of you who see me on wargaming Forums might be familiar with me often peddling my painting wares (sometimes as Sir Joshua Gregg RA, noted 18th century socialite and court painter to the rich and famous!).  I hope it doesn't bore you but it does pay off and, over the years, I've been very lucky to be able to visit, virtually and sometimes physically, the wargames tables of some noble 18th Century wargaming aristocrats (you know who you are!!) and put their imaginations, with and without a hyphen, onto canvas or paper.

The latest commission is a wonderful privilege to do a portrait of notable blogger/wargamer, retired US Navy Captain, William Walker of Florida and his good lady, Lynda.  "Captain Bill" is famed for his fabulous digital insignias, cartouches, coats of arms etc, in particular for imaginary wargaming flags as often featured in his blog The Reich Duchy of Beerstein

Bill has been a patron of mine for Hussarettes for a few years and this time we started discussing a battle scene but he wanted himself in it and some of his favourite model soldier regiments. It soon became evident he did not have the wall space for the big scale atmospheric mayhem I was conjuring up so we cut back our ideas. The concept of the portrait was the top priority so Bill and Lynda, as an 18th landed couple, were to feature prominently and with the addition of Reich Duke Wilhelm's bodyguard the Pilsner Leib Horse Grenadiers. I came up with idea of setting them in the grounds of "Beerstein Palace". This was the final result in an oil painting and below I tell the story of how it was executed.


Bill supplied me with a lot of photos of the relevant 28mm figures from his collection of which here are just two, and the colours of the Leib Grenadiers
I was original inspired for the overall concept by Sir Thomas Gainsborough's portrait of "Mr and Mrs Andrews". Painted when Gainsborough was young in about 1747- 48. It's a super rendition of period clothing and proud, rather haughty, landowners, but significantly Sir Thomas was a pioneer of  English landscape painting, a subject close to my heart, so I wanted to put an interesting background in my aristocratic portrait.

Apart from that dear Sir Joshua Reynolds had done many, many fantastic portraits of upper class nobs, their ladies, and military gentlemen. Followers of this blog might appreciate a few of the latter:

In addition to being influenced by such works of art as these I perused quite a few 18th century portraits of fancy civilian types for lace jackets and of course needed some period ladies riding side saddle.  Mr Google usually comes up with the goods when I ask him and I found the lovely riding coat on an actress, and Bill and I agreed a softer green and blue shading than on his model. I think it works very well.

Major Debauchery and the standard bearer are both based on two of many pics of yours truly dressed up for a Hussar photo shoot in 2018. Don't laugh, I suffer for my art! 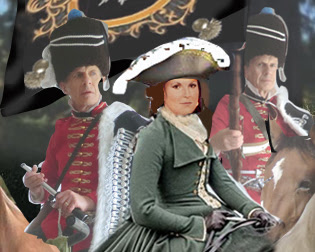 Bill supplied me with a photo of himself as a naval captain and Lynda in their younger days looking very distinguished in an oil painting done way back then.  I got the four foreground horses from my art photo archives and chose a small grey for the Duchess and an impressive black for the Reich Duke.  I then photoshopped the whole thing together on a background of the adapted Kingston Bagpuize House and grounds. I duplicated some of the lines of Bill's models to produce two ranks of Horse Grenadiers awaiting inspection. I then got his agreement that this was along the lines he wanted. The following photographic sequence gives a snapshot of some of the key stages in developing the painting on the canvas: 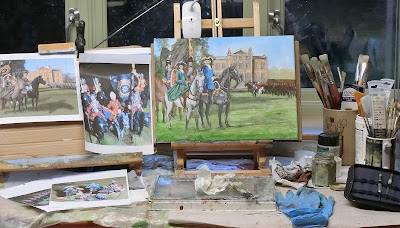 Well I hope you have enjoyed this insight into the painting process, and the work itself will soon be wending its way to Florida, assuming the postal services both sides of the Atlantic feel safe to do so. If this gives any of my readers inspiration for a painting you will find my prices are much more reasonable than you would expect, just get in touch and we can discuss -  Chris Gregg