Just for a change I treated myself last weekend to a Napoleonic game with some of the old mates in Cheltenham. Paul D  had devised one of his clever historical interpretations at 1:100 figure scale and his well tried home grown rules. This was to be the Battle of Hanau, noted for a brave blocking action by the Bavarian army trying to stop Napoleon's Army retreating back to France from the Battle of Leipzig.

I took the role of the Austrian Right Wing commander, General Baxh, so I only had sight of the Austrian briefing, but it gives a good overall view of the background. My co-generals were Chris Newcombe as General Wrede C-in-C and Austrian Centre Right, Tony Woodman commanding the central Bavarian Corps and Ken Collier commanding the Bavarian/Austrian Left wing cavalry.

Mike Tovey played Marshal Macdonald, facing me, Lucas Wood had a dashing role as General Lefebvre-Desnouettes with the Imperial Guard cavalry while Pat Burden as Napoleon lurked off table at the start but dipped his hand in sharing with Mike the Imperial Guard Infantry and Artillery. Later Pat came on with Marshal Victor's Corps and Napoleon himself. 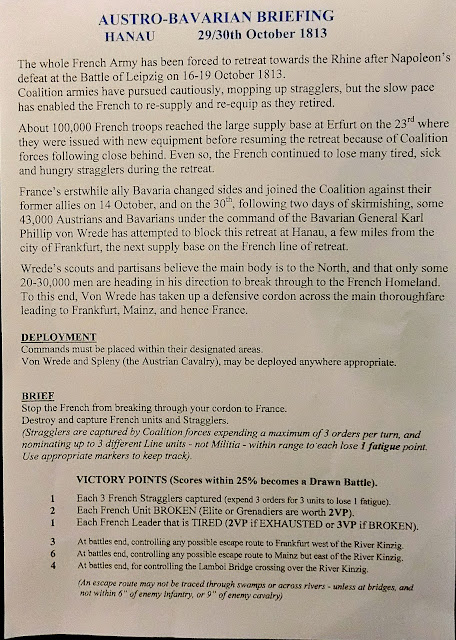 The battle opened with aggressive attacks by Lucas on Ken's Coalition cavalry and at first the latter seemed to be putting up a good fight............ 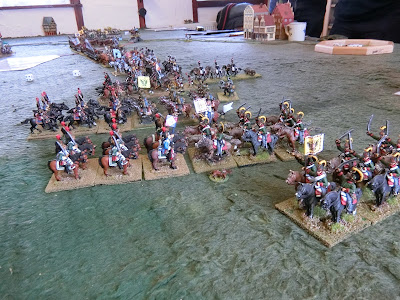 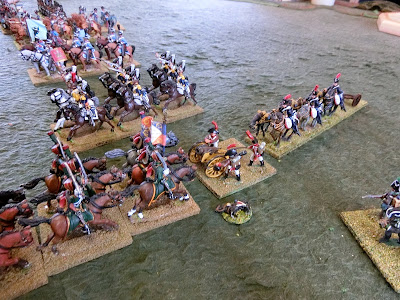 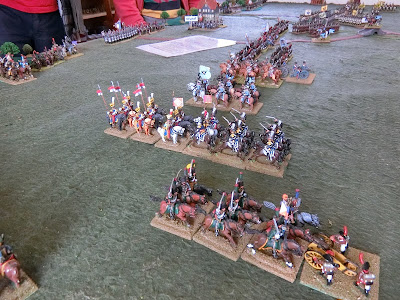 ......but within two to three moves the inevitable happened when you face French Imperial Guard Lancers, Chasseurs, Horse Grenadiers and Dragoons and Ken's cavalry and Horse artillery were dispersed.
By about Move 4 or 5 things were changing rapidly. My three colleagues were sharing out units to give poor Ken a new command as the left part of the table was now completely dominated by French cavalry. The Bavarian Corps had been suffering from long range artillery fire and now the Horse artillery of the Guard joined the bombardment to push Tony back towards the bridges. We did not know it yet but it was all part of Napoleon's master plan to facilitate exit from our side of the table.


On my flank we'd been playing it cool assuming the French would take the initiative, but Mike did not so Chris and I moved gently forward aiming to box him in and make any advance slower. I had seen the trouble over by the river and sent a messenger to von Wrede offering to bring my corps over as reserve/backup in the centre while Chris held the road line. It took two moves for the messenger to get there. However we found that brigade of French Chevaux- Leger lanciers very intimidating as we had nothing to match it and that prevented us doing anything decisive.

This had been an exciting and nerve wracking episode in which I feared my own Corps would be broken open, but luckily the loss of one brigade was all we sustained and were now free of enemy cavalry so could resume our advance if we chose to.  However, as can be seen below, the French cavalry attack was a very useful ploy to keep us back while Victor's Corps has been arriving along the road, where Macdonald had erected a pontoon bridge, and were now crossing the river in considerable force, leaving us guessing what would happen next.


The next sequence of photos shows the gradual decline of Tony's position with the Bavarians contracting to try to hold  a double bridgehead under attack by Imperial Guard Foot Chasseurs and Artillery, and eventually Guard Chasseurs a Cheval. 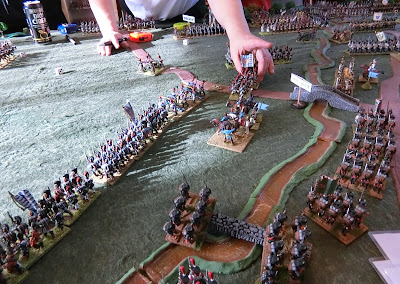 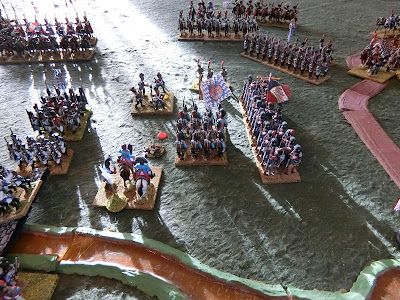 Back on the Austrian right as you can see in the photo below, Victor's Corps has crossed the river in strength and is now forming column to march to the left behind the fighting line and make progress towards Frankfurt.  Chris and I pulled back our Austrian Corps (he in indecent haste I thought!) as we could see things were going to get worse in our left rear. But this was something of a "Hastings" ploy on my part as I wanted to draw Mike out of those woods where his relatively low quality troops might be more vulnerable to a limited counter-attack. I wrongly assumed that eventually he would want to get down the road in front of us. 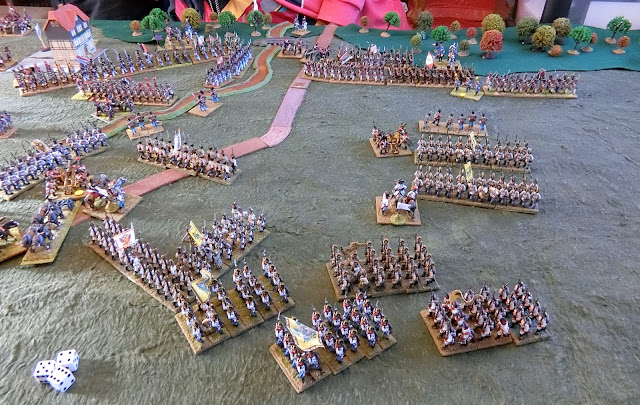 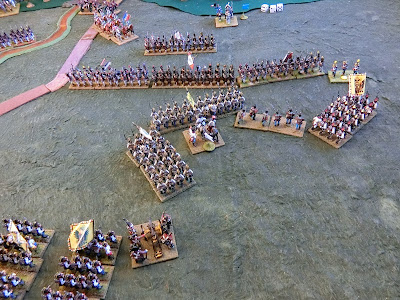 During this time my Corps Commander, Baxh, had been unhorsed (by an enemy Event card!) and thought to be dead, causing all my units to test for morale. It was a bad round of dice rolling as can be seen by the number of "shaken" markers in evidence in the above photo. At bottom left corner and below you can see Chris had brought von Wrede over to help me rally, even though the troops at the bridge were still under fire from the Guard artillery. 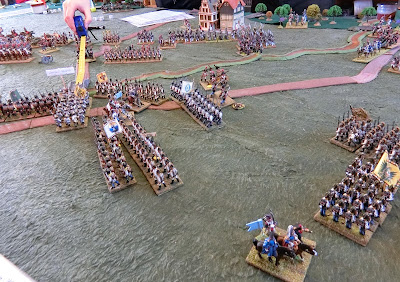 Back at the pontoon bridge Tony was holding on doggedly. He was assailed by both Imperial Guard Foot and Horse Chasseurs 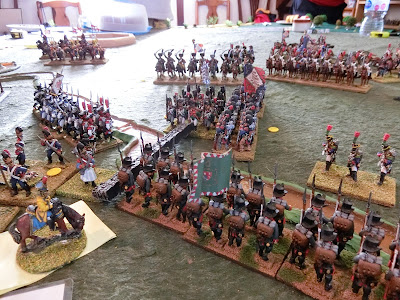 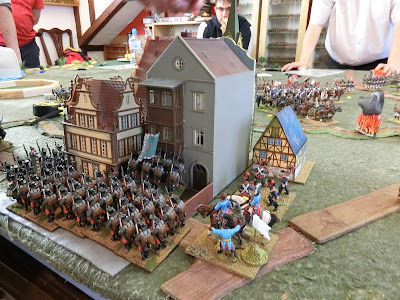 The uncrossable river seemed likely to cause a standoff. We'd had about 12 moves and dusk was approaching. Victor's Corps was clearly going to make it across the field and exit towards Frankfurt so I was in favour of an honourable retreat, but my colleagues were made of sterner stuff, despite our prodigious losses, and were about to contest the main bridge in earnest. 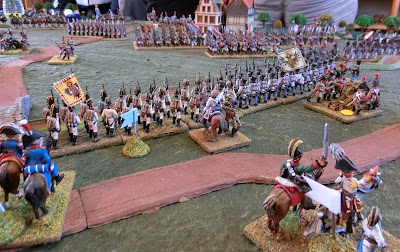 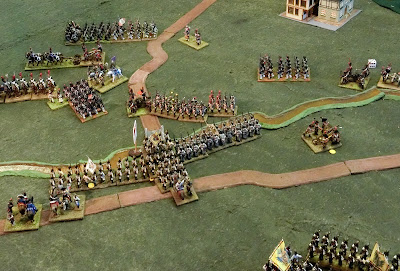 It was about 5.15pm and my lift home had arrived and I thought that it was an appropriate time to leave but Paul said there were still two moves of dusk to play in and asked me to hand my command over to Ken so the game could continue. I asked him to let me know what happened and here is what he wrote:
<<After you left, the French started to cross the river in greater force, but Ken counter attacked (with your forces) and started to push them back and almost cut Napoleon off (and almost captured him!) from the main army. However, without immediate support from the central Austrian Corps, the inevitable and renewed assault by the French wiped out all five units  from the command, leaving an exhausted grenadier and one other unit only (he did have some unlucky timings on being tired and shaken and a few poor dice rolls as well). By the time the central corps got back into action to help, it was too late and night fell with a Total French Victory 64VP to 17VP. some 28 Coalition units had been destroyed against 2 French! >>
He went on to say:

<<As regards starting forces:
The French had 12 infantry (including 2 old guard - and six conscripts) against 23 coalition (inc 3 grenadier). The French had 3 skirmish bases against 6 Coalition (inc 2 jaeger). In addition, the French had 7 cavalry (inc Guard who had lost some fatigue getting through the woods to the battlefield) against 6 line and although both sides had the same number and type of artillery, the coalition was not as powerful. Ultimately, the French had to attack and score much greater damage against a defensive line and break through, without taking too many losses - which they did.
I think you had the right idea in attacking Mike's forces, but I also think that young Chris retreated at the wrong time (if you had been able to attack Mike together, his units were relatively easy to break, and the double VP per French loss would have made a potential win possible. In fact Chris marched back and forth twice more to Hanau and the Lamboi bridge in time to help neither. Ken almost succeeded in capturing Napoleon (worth 24VP if he had) but ran out of units and with no close support, it was all over!>>

It was a brilliant game. Even though the result seemed so unbalanced I have to hand it to our opponents for playing to their strengths, using the terrain well, and suckering us with their grand tactics - Just what one would hope for from Napoleon when the odds seemed stacked against him in 1813-14!  Well done Paul!

I will finish with Horace Vernet's classic painting of the Battle of Hanau which has inspired me since I was a boy wargamer over 50 years ago.............I hope some readers will be similarly moved! 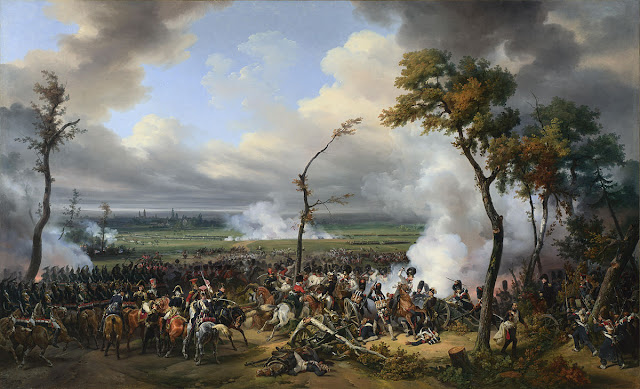 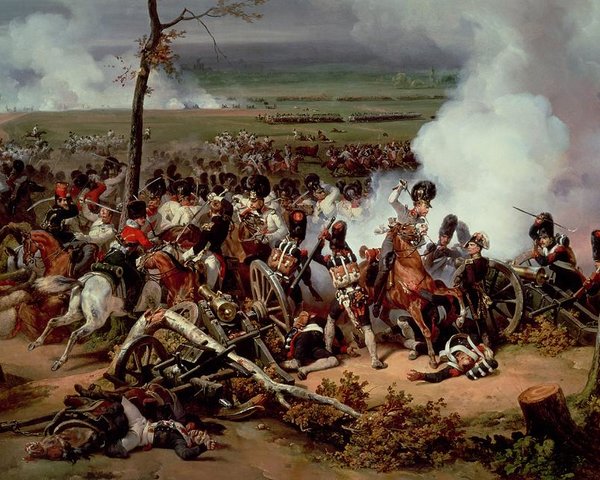