I was very fortunate to be invited by Keith Flint (of "Honours of War" fame) to the very first Cotswold Wargaming Day held on 2 September  2018 in the small town of Northleach off the A40 in the mid-central Cotswold Hills in Gloucestershire.

Keith had organised this and had invited various wargamers he knows in the general Gloucestershire/ West Country area. I live only about 20 miles away from the venue but I met wargamers from a distance - at least Plymouth and Aldershot, and not so far away at Cirencester. Keith had the backing of veteran wargaming legend Stuart Asquith who proudly said he lives near enough to "walk home to lunch and back again". Stuart and Keith had put up prizes, and also with the sponsorship of Osprey Publishing to reward the game organisers for their efforts.  18 attended in various capacities and took part in five games, some ran twice during the day. A small £5 donation each covered hire of the spacious hall and included self service tea, coffee and biscuits all day!  Keith allowed me a nice amount of space for my display of military paintings, which I hope was of general interest, and I made at least one new acquaintance and client out of it as well as discussing a new commission in detail with another.

First a general look round and then a bit more detail of what interested me most. 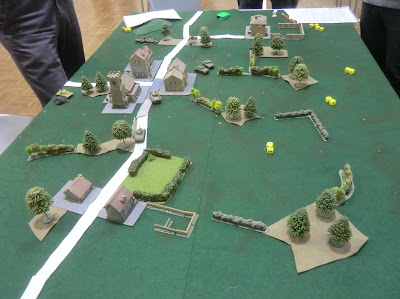 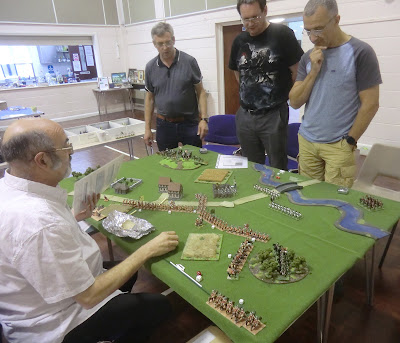 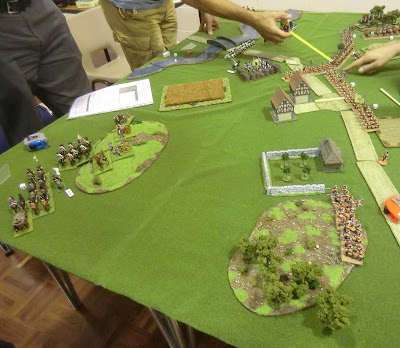 When the Cotswold Wargaming Day had originally been planned for March this year and had to be cancelled due to snow I had signed up for Roy and Stuart's classic "20mm" Napoleonic game for purely nostalgic reasons. As a lad when I first started Napoleonics Hinton Hunt figures were a market leader but a bit pricey for me and most of my metal collection was the cheaper and more bland Miniature Figures. So the idea of playing a full blown battle with just part of Roy's classic Hinton Hunt collection was too much to resist. (Apologies for the poor picture quality - the light in that part of the hall just did not like my camera.) 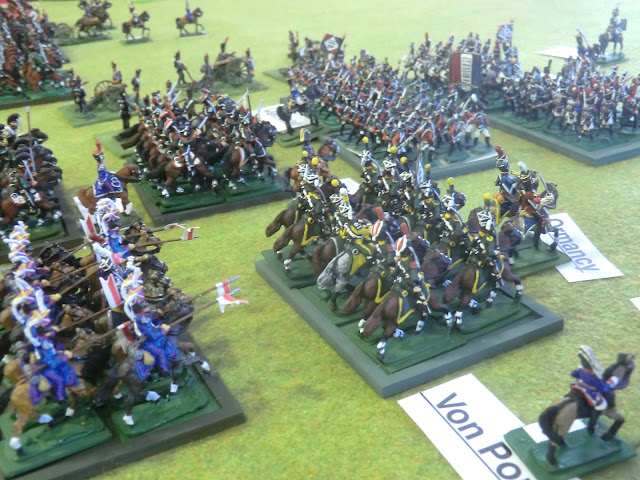 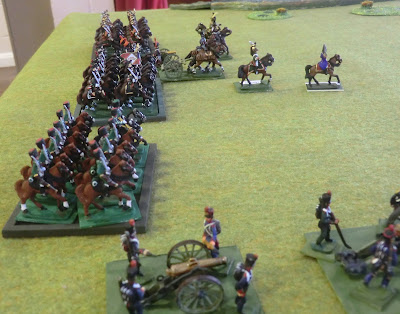 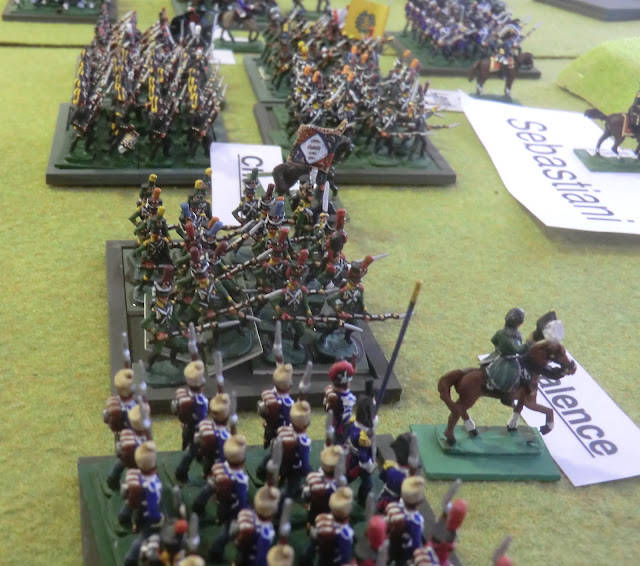 A bonus was that we were to use a 1970s style set of rules called "Muskets and Marshals" by Ian Spencer. Fistfuls of dice, saving throws, casualties in figures not points, simultaneous movement, non-scaled-but-fun weapons ranges - you get the idea.....So this was Talavera 70s style. That meant using historic orders of battle with each battalion at 24 figures and cavalry regiments of 12, lots of guns and the whole battlefield represented on a 10 x 6 table. 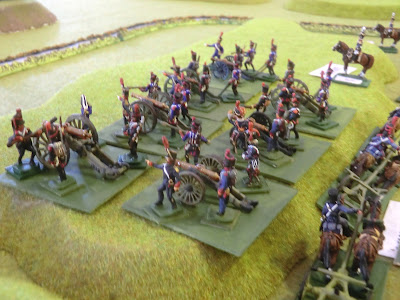 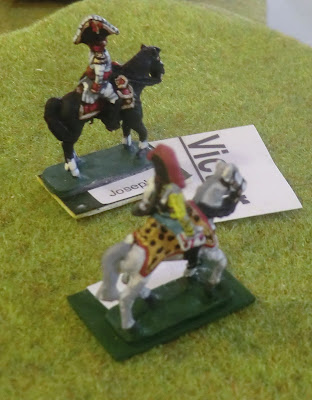 An 8 inch musket range maximum compared to 36 inch artillery range seemed a bit disproportionate but I was here for nostalgic wargaming not a simulation, and it all worked pretty well. So, willing suspension of disbelief and get stuck into those 12 dice per infantry volley and enjoy the mayhem! (Hey, I love saving throws anyway!) 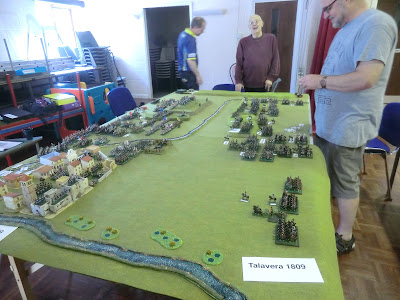 I innocently asked if I could go British, and that was before I knew it was Talavera. Matt was busily putting out the French and the Allies had been  placed along the ridges, redoubt and city as if deployed. Although they were all in exposed column blocks on super custom made trays I did not query it - mine not to reason why when playing a new set of rules in someone else's game. And then almost by accident I had been nominated as Sir Arthur Wellesley and was having the orbat briefed verbally, loosely given a historic map as a guide, and a formal historical order of battle in a book in Spanish! To my (pleasant) surprise I was told the "deployment" was only approximate and I was to redeploy how I thought fit within the general historic areas. So, getting my head round the battalions, brigades and divisions at no notice proved a bit more of a challenge than the "old school" muck around that I had expected! Who says wargaming does not keep your brain nimble? Anyway I got there in the end and was quite pleased with my lines and use of reverse slope, except for the exposed left flank which Roy assured me would be secured later.

I won't be giving a blow by blow account but just enjoy the pics of the classic troops with some annotations.

Although I got the troops deployed Stuart turned up just in time to command the British troops on the big left flank hill. Player-umpire Roy had the Spanish, and kept most of the Allied cavalry in a central reserve position. Matt and Tim commanded the French. 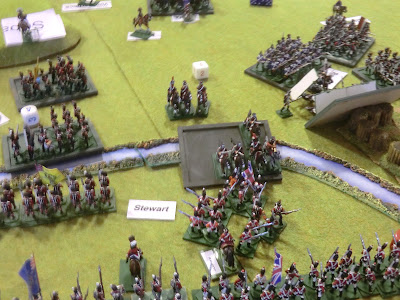 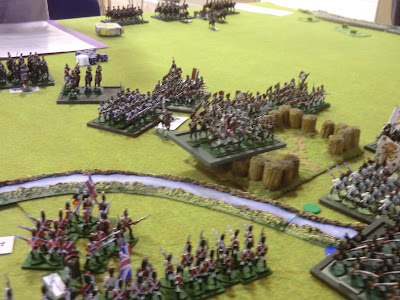 We had played from about 1030 to 1620 with a break for lunch and had to stop with the game hanging in the balance. There had been a lot more incidents than this space allows me to describe but essentially the battlefield ended up as four different zones:


I couldn't stay to hear Roy's pronouncement on a result but I think it would be something along the historical lines - French marginally beaten tactically and with significant losses, but Wellesley would deem that with most of his artillery and light troops shattered he would use his superior cavalry position to cover a strategic withdrawal and leave the Spanish to it! (Care to comment Roy?)

Great fun and a very relaxed atmosphere. Matt and I were almost trying to outdo each other in gentlemanly play!   At one point we couldn't decide so just diced for it. Pragmatic Roy came up and realised the rules did cover the situation but said "Why interfere when both players are happy with a dice decider!" Regular readers know I like a "serious" historical wargame in my own space but when I'm away from home it's OK to play just for fun isn't it? This game fitted the bill perfectly - history, nostalgic figures and rules and good company. Thanks to Roy, Matt, Tim and Stuart for making it possible. Also it confirmed my view that 1:76 (22mm) is an ideal size to refight a historic battle and I will be planning to redo my SYW armies accordingly sometime in the future.

I reported on Will Harley's successful gaming with his classic armies at the Kenilworth Wild Geese gathering in June and he felt able to travel North again for our benefit in Gloucestershire.

Will told me he fell into collecting Spencer Smith figures more or less by accident a few yeras ago and ended up buying many hundreds, and creating two Imagi-Nation armies. For those not familiar with SS they started life in the 1960s as bags of about 50 x "30mm" polythene figures all in the same marching position - grenadier and musketeer, with a few random officers and drummers. There were  three or four mounted poses and a few gunners and that was it. The figures lacked detail so could be painted pretty much as any 18th century types you wanted. Willz has recreated the ingenuity of those early years but applied a more sophisticated painting style and matt finish which gives the armies an appearance of elegance and polish comparable with any modern 28mm range.  He justly got public praise for this from Stuart Asquith who awarded Willz the prize for "Best Painted Armies". 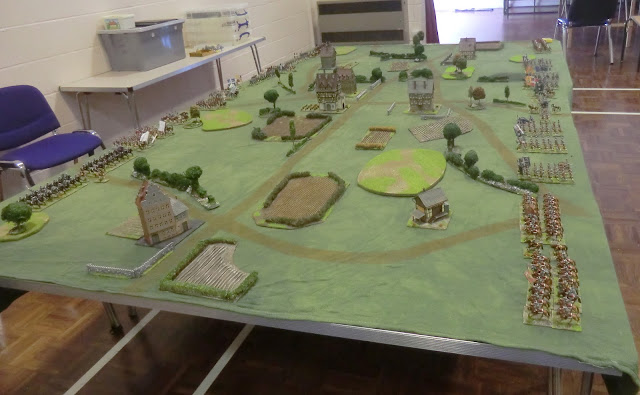 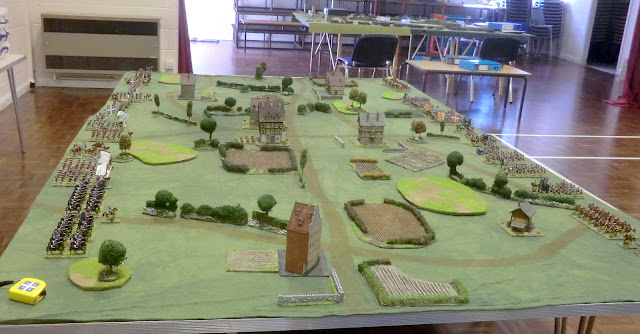 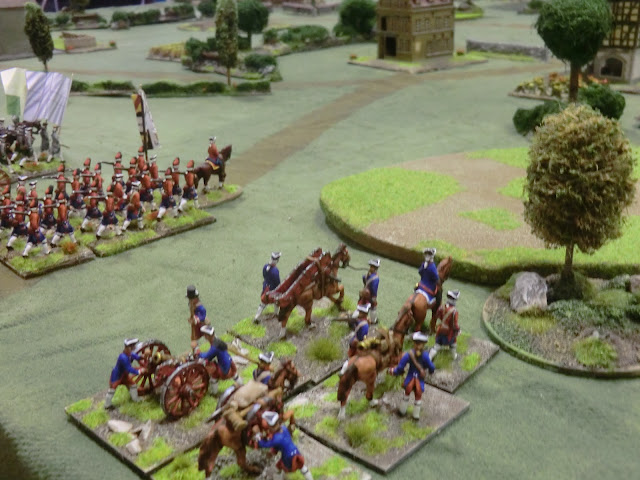 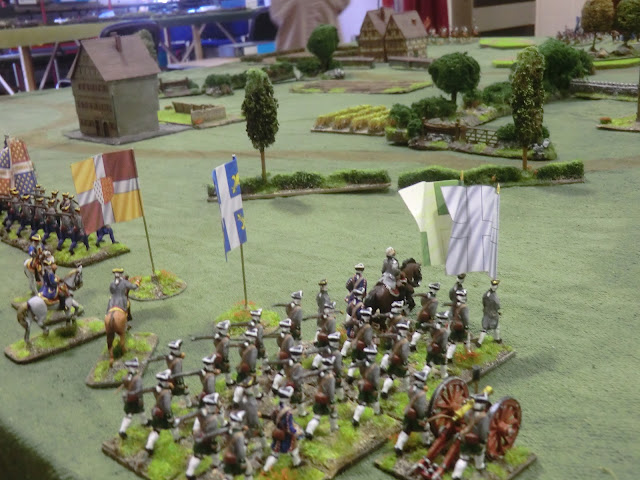 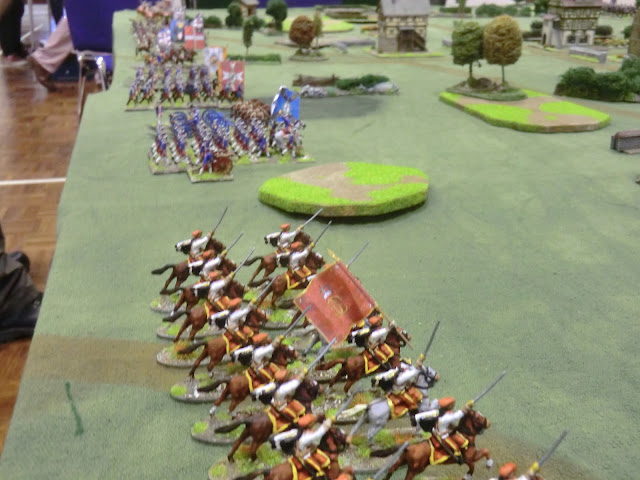 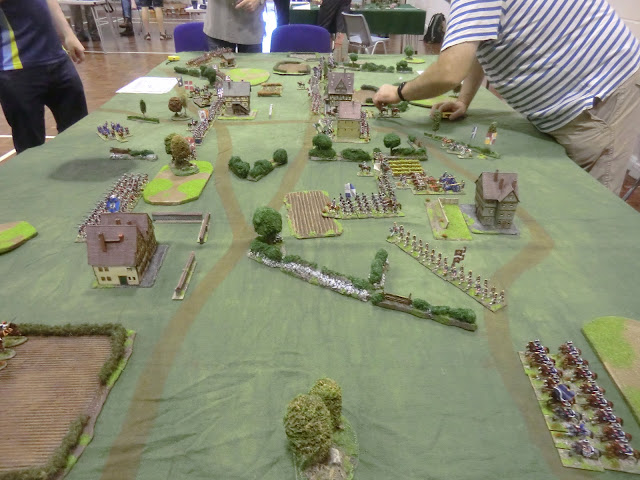 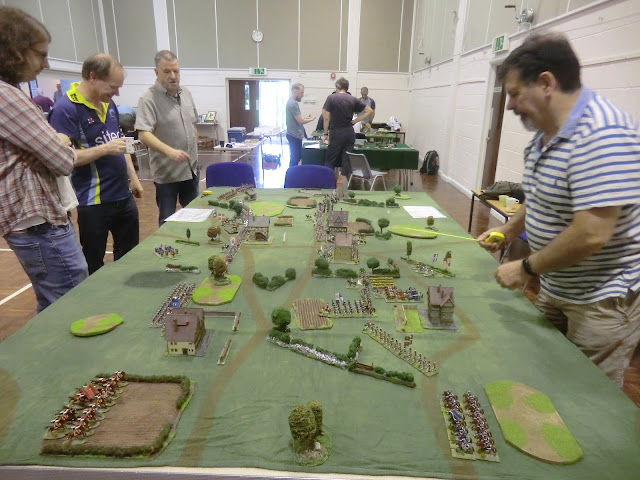 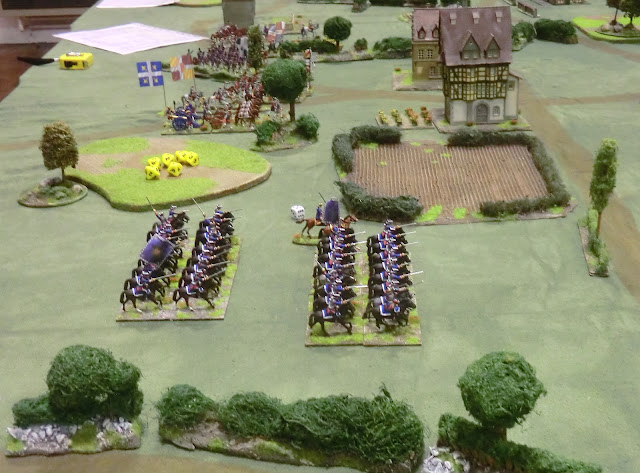 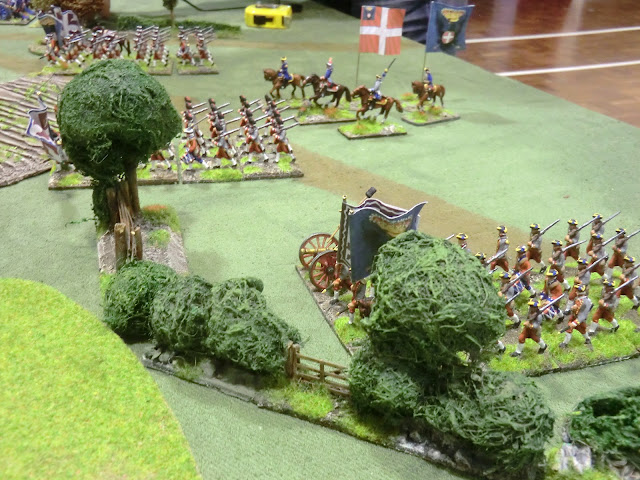 The day also included a speech and prize giving by Stuart Asquith. There was a prize for "Most Gentlemanly Gamer" and who could argue against Bruce winning that - serving caviar with his game! Each of the games got a prize for some aspect of our hobby at which it excelled but Best Overall Game went to - Talavera, in which I was privileged to play Wellington, so I could not disagree it was a great choice.
Many thanks from me to Keith and Stuart for organising such an enjoyable day not very far from home, and to Roy and Matt for putting up with me at Talavera.

Feedback has encouraged Keith to agree to organise CWD2 on 1st September 2019 at the same venue and he hopes to encourage more game organisers and players than for this inaugural venture. So if you live in the general Central/South -West of the UK and fancy organising something you can either get in touch with Keith directly or email me and I will pass it on.