My previous post, Battle for Hoeke Valley Day One action , created a lot of very positive comments for which the team are very grateful. Apologies for the delay for those keen to follow the story but real life has to be attended to in between blog posts!

The story so far
To summarise the first day's  play very briefly - On the Eastern flank the French under Prince Jerome held onto Pironchamps farm and looked as if they might break through the Dutch -Belgian line with an uphill attack to the left of the farm, but by day's end the battalions had run out of steam and poor morale dice took their toll. On the Western flank the French attacks, directed by Reille on the Chatelet area, with both infantry and cavalry, were initially repulsed, but extreme perseverance overcame the Hanoverian defenders and saw Reille and Bachelu make some headway by Move 7. In the centre the Imperial Guard Lancers forward wing mounted Hoeke Hill and saw off a DB Cavalry counter charge while the supporting second wing made ready to face reinforcements in the form of the British Heavy Cavalry brigade. French line lancers reinforcing the centre made a big cavalry clash inevitable.

An early start
The evening before, returning from the pub, players and umpires agreed that we had not got as many moves done as we had hoped and that Day Two reinforcements might be delayed too long to give new arrivals Ken and Roy a decent game. So we all got up early and breakfasted and were down in the wargames room by 0845, dice and tape measures in hand ready to do Move 8 before they came.


I have to apologise that as I had to take over Graham's troops and spent all day operating the French right flank infantry and artillery my understanding of the detail in the centre and left was rather limited. These overall shots help explain the situation.
Fully up to player strength now, I can take up the story to include Roy Boss, being a cavalry commander in the French centre, and Ken Marshall taking British reinforcements in the vicinity of West Hoeke Bridge.


Shoring up the defence of Pironchamps 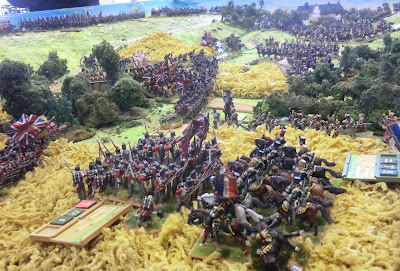 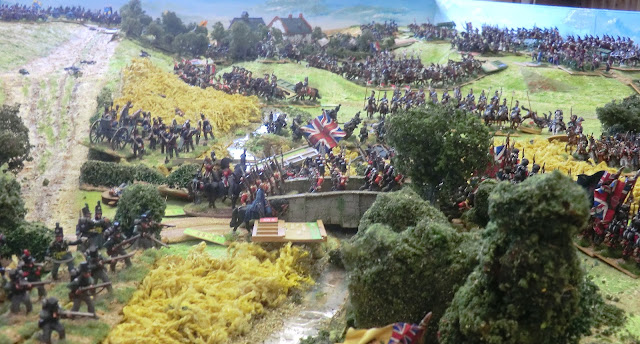 Balance of power changes on the Pironchamps flank

The final battle photo with a yellow line showing the front line. Considerable French gaining of territory up onto the centre of Ramskapelle heights

That familiar ADC of modern life, the smart phone, was bringing urgent news of significant road closures along the A40, and although it was only 1700 hours, Richard and James were concerned about their route home. Weighing up the battlefield with his practiced eye James said "I don't think one more move is going to make any difference, let's call it now".  That still left time to tot up the final points scores and have a jolly good analysis of the game before they went though.

So next time - Score results and conclusions on the game, and thoughts on how this will affect our refight of Quatre Bras