Just following up fairly quickly on my previous post Leading the herd to bring you the completed squadron of Perry Plastic French Dragoons as about a quarter of the full regiment we will field in our 1:3 scale refight around La Haye Sainte.

16 of them are painted as Elite Company soldiers but they will be supplemented by more red plumed Dragoons from other  players' collections and it might amount to an Elite Squadron on the day!

As I've said before in the context of a 180 figure infantry battalion I think the secret of finishing these large units is to keep your resolve. Always complete every stage for the whole lot before starting the next colour. Don't give in to that urge "I'll just see what these half dozen look like completed", because you will find it very difficult to keep up the momentum. 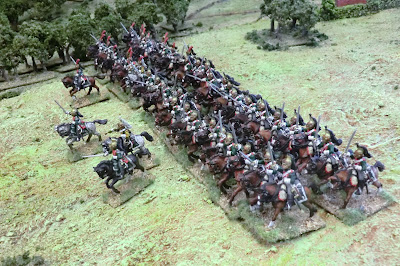 With large numbers it's worth the effort to get your "logistics" right when assembling or painting. Have everything in near reach and use the same sized brush throughout the stage for the whole lot - say a wider one for the white gauntlets, and leave the smaller brush for the white portmanteau straps aside until you are ready to do them all.  Also an adage among oil painters who want to maintain a more fluid style in say landscape painting is to use the widest brush you can get away with. That works with this mass production figure painting as you are less likely to distract yourself from the bigger areas with the temptation to try that same colour elsewhere. 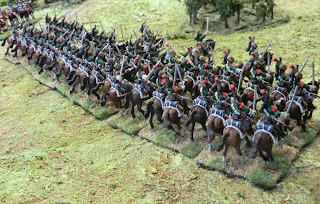 Photographing the test games showed that, with large units, in the time elapsed in even one move you could end up with considerable bare open space on the table if a unit broke. We will need to leave some debris to show the scene of action. So I've converted quite a few men and horses as battlefield casualties, and I've asked my collaborators to try to find time to do the same for some of the troops types they are providing. I anticipate burning the midnight oil in July on casualty figures in the run up to our weekend! 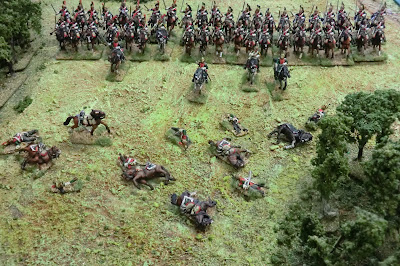 Finally a couple of atmospheric, low level digitally enhanced photos. I really love doing these, I hope you like them too. 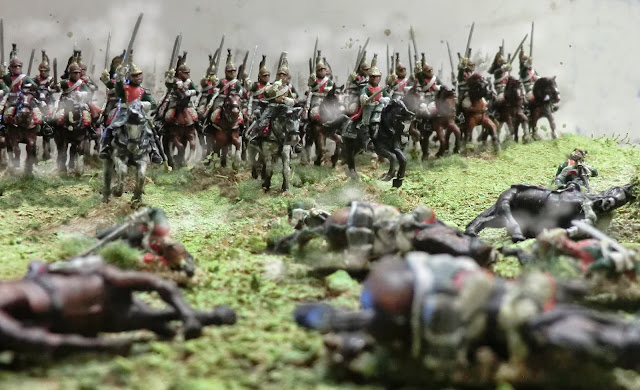 And now, I'm heavily into assembling the next batch of cavalry - a squadron of British Life Guards using Perry plastic British Hussar bodies and legs with French Carabinier helmets. They are shaping up nicely.