Well, you can't blame me for that title!  The expert miniatures-painting-machine that is Kevin East has been at it again. In fact he sent me these pix some weeks ago but I held them back while my Hussarette paintings were fresh off the easel. I know Kevin forgives me but I doubt readers will when they see this lot. It is a generic French Light Battalion that will form part of the 1st Legere for Hougoumont and one of the three battalions of 13th Legere for La Haye Sainte (I have to do one of the latter myself) 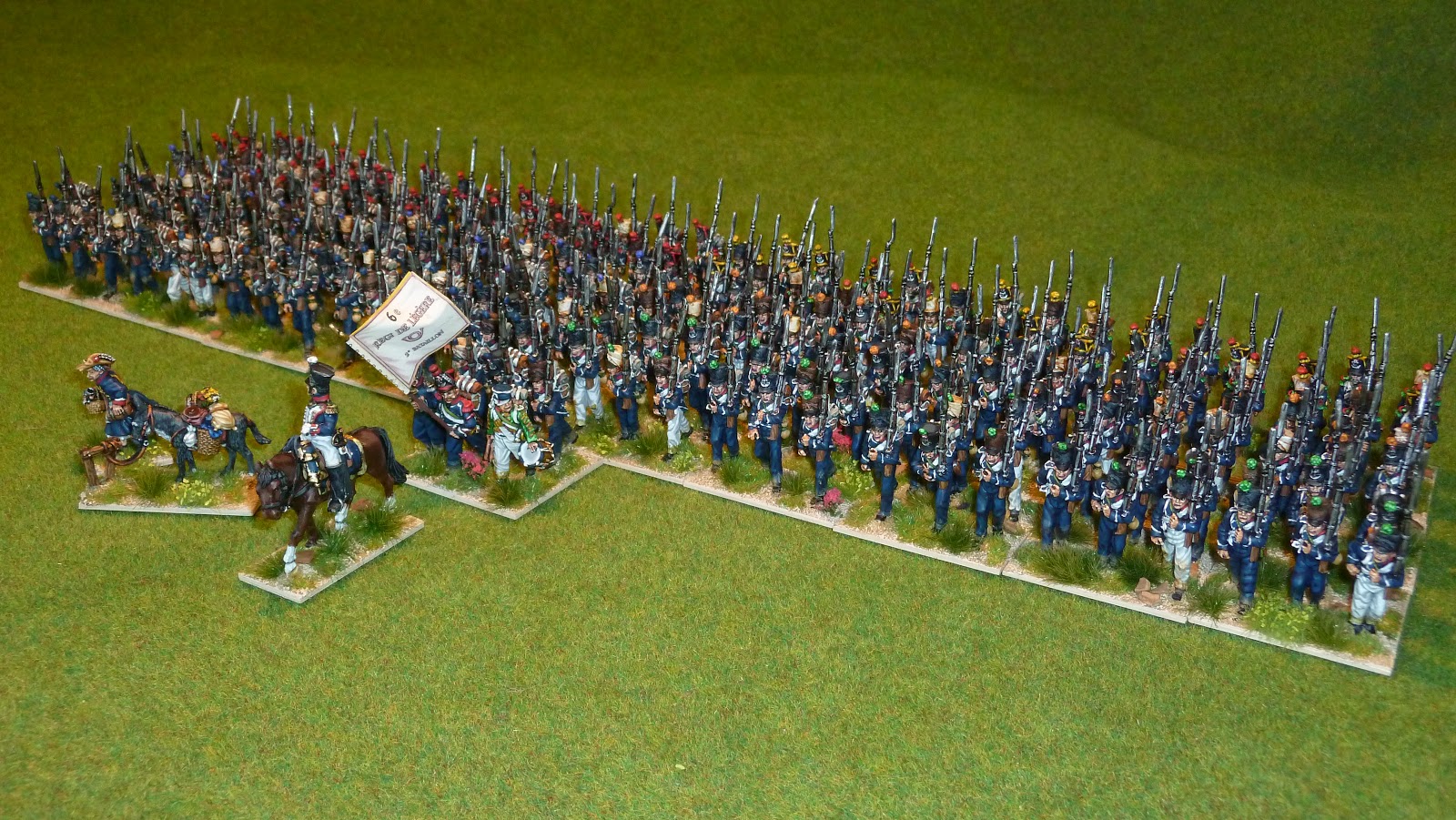 In Kevin's own words:
"Here’s another addition for the Waterloo series of games we will be putting on in mid 2015. Completed on time, to my tentative schedule, a French light battalion of just over 180 figures.  I already had 60 figures from my existing collection, which are in battalions of  36 figures, so the 120 that I just completed now make up a complete French battalion representing 558 actual men. All with the correct colour company pompom, the battalion is completed with its own vivandiere who will be playing her part in the  games! 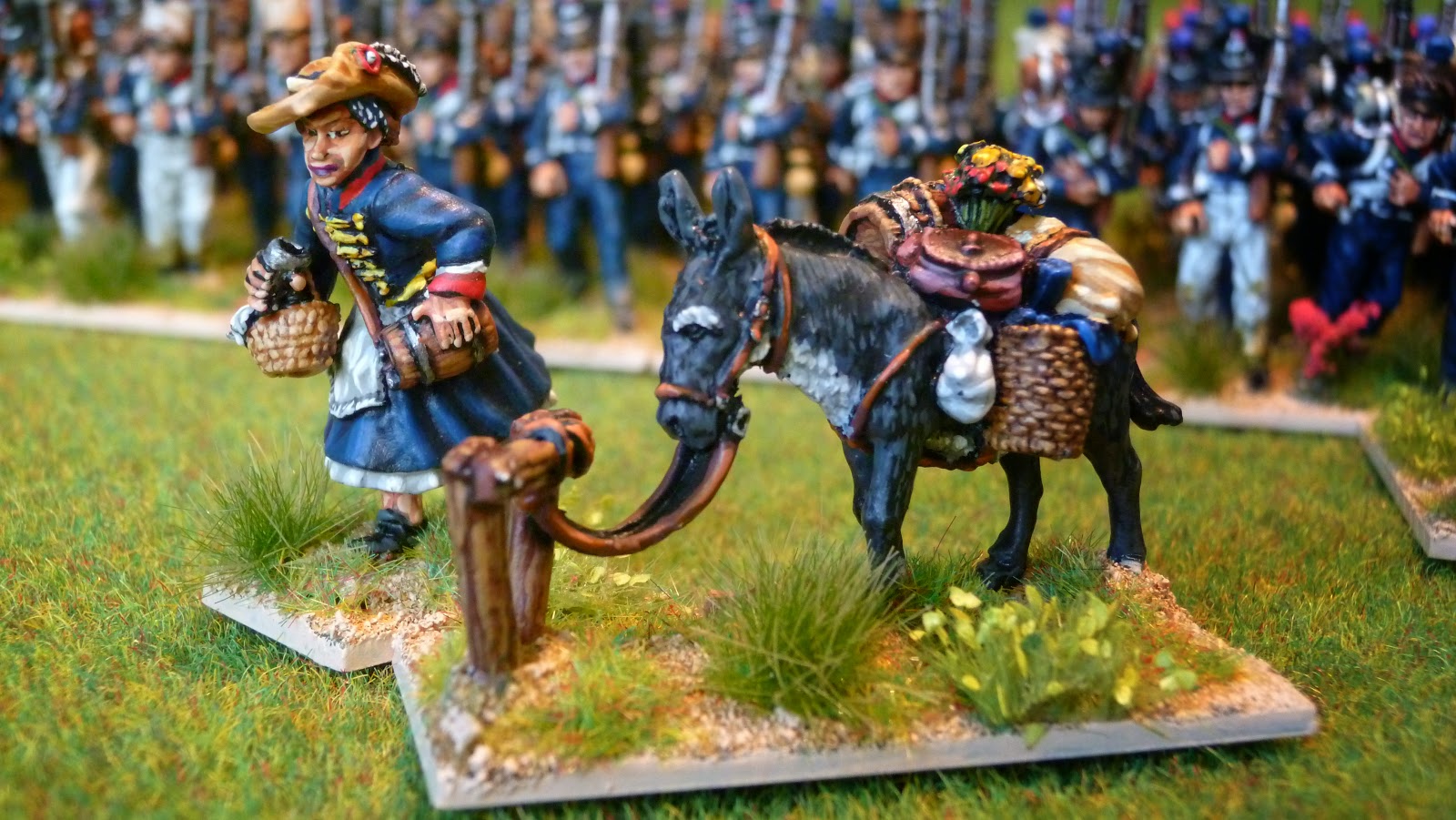 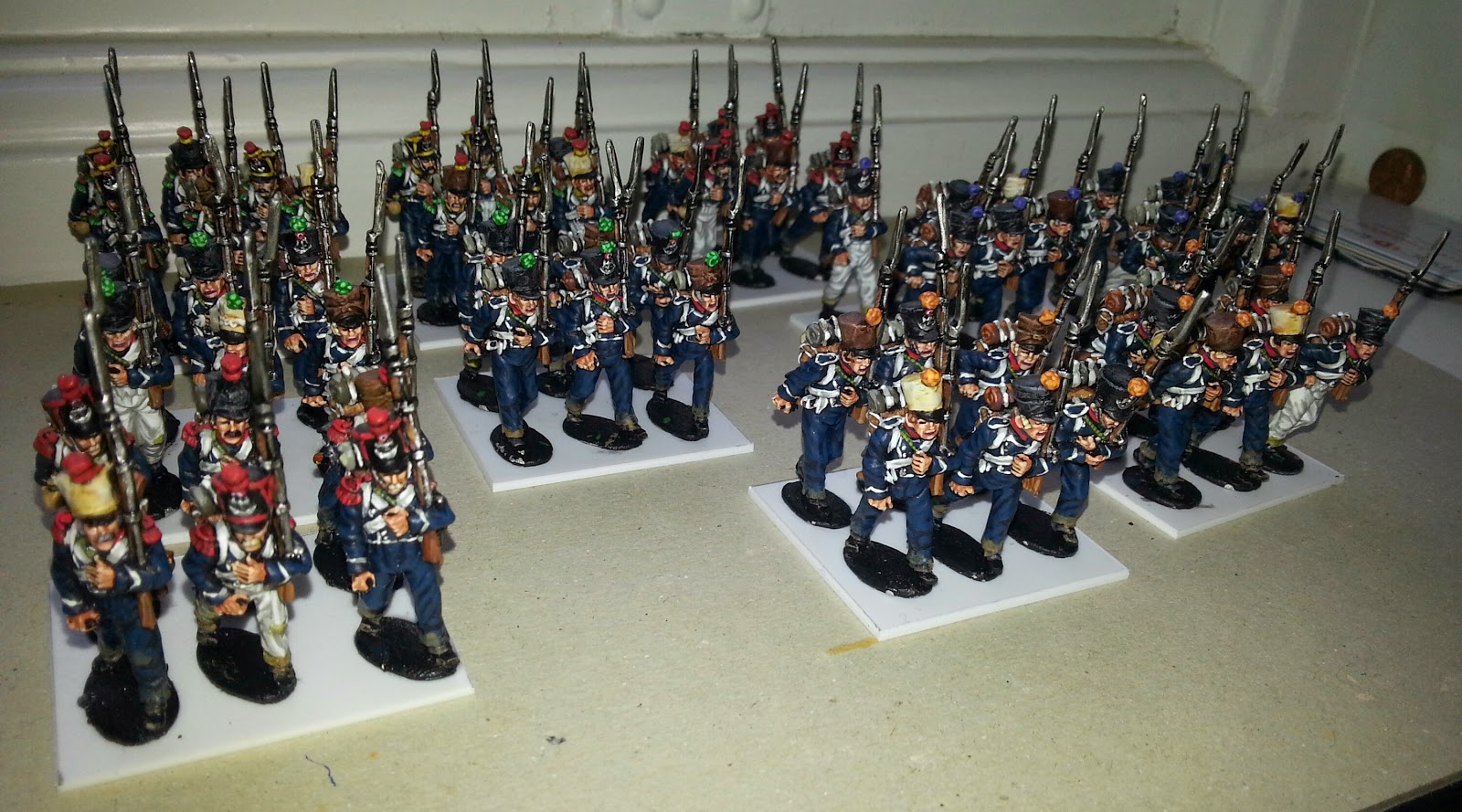 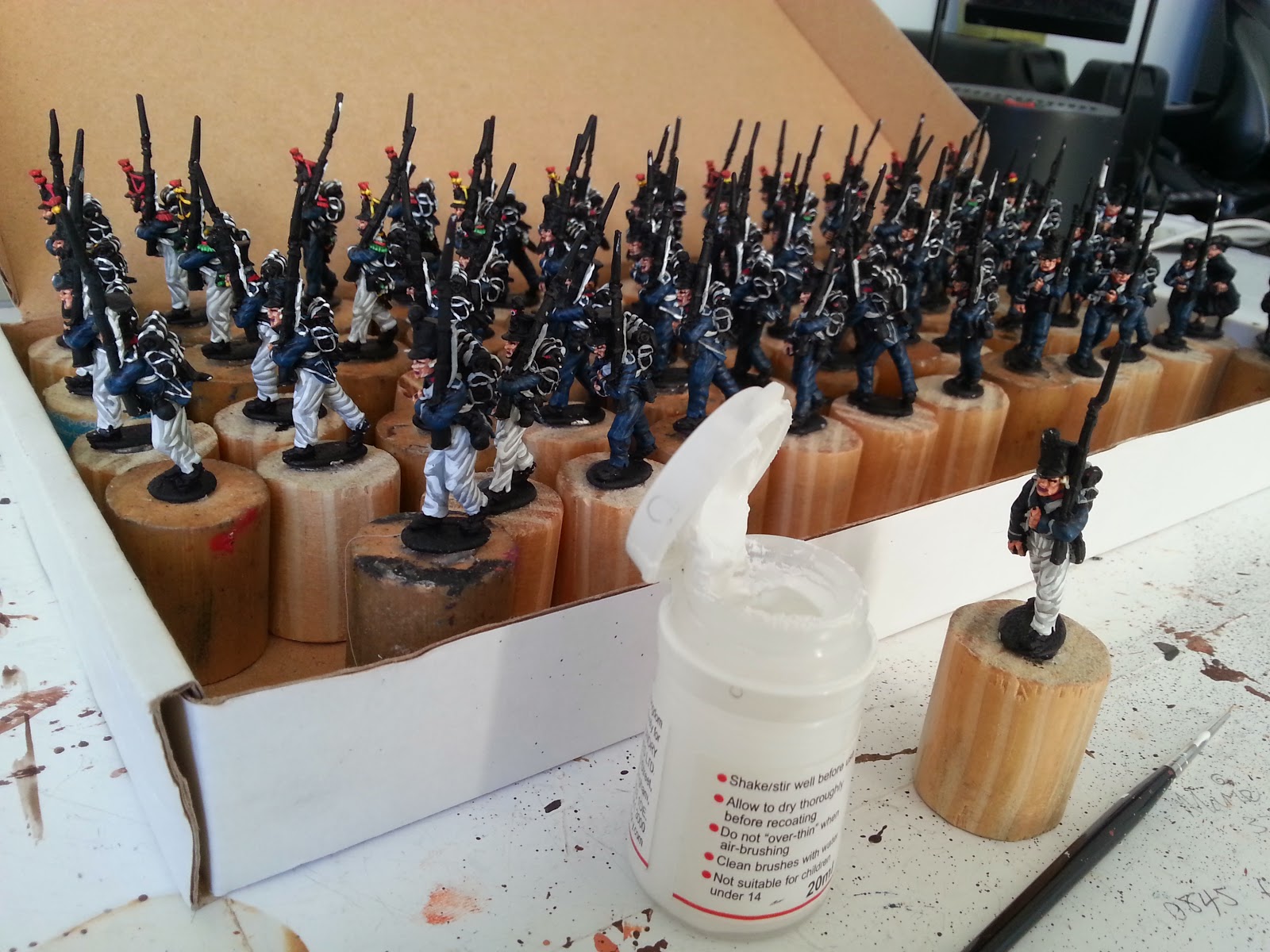 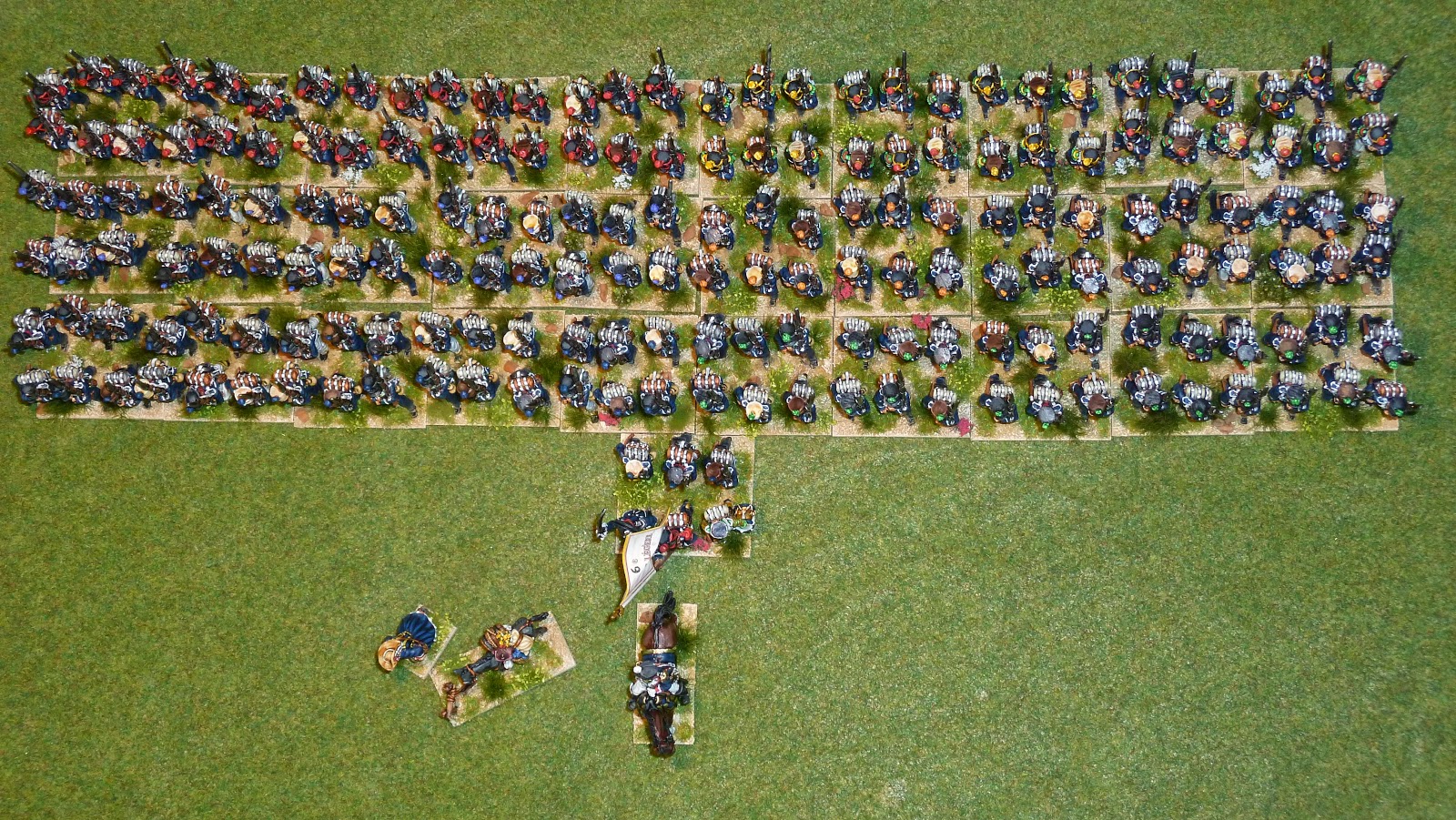 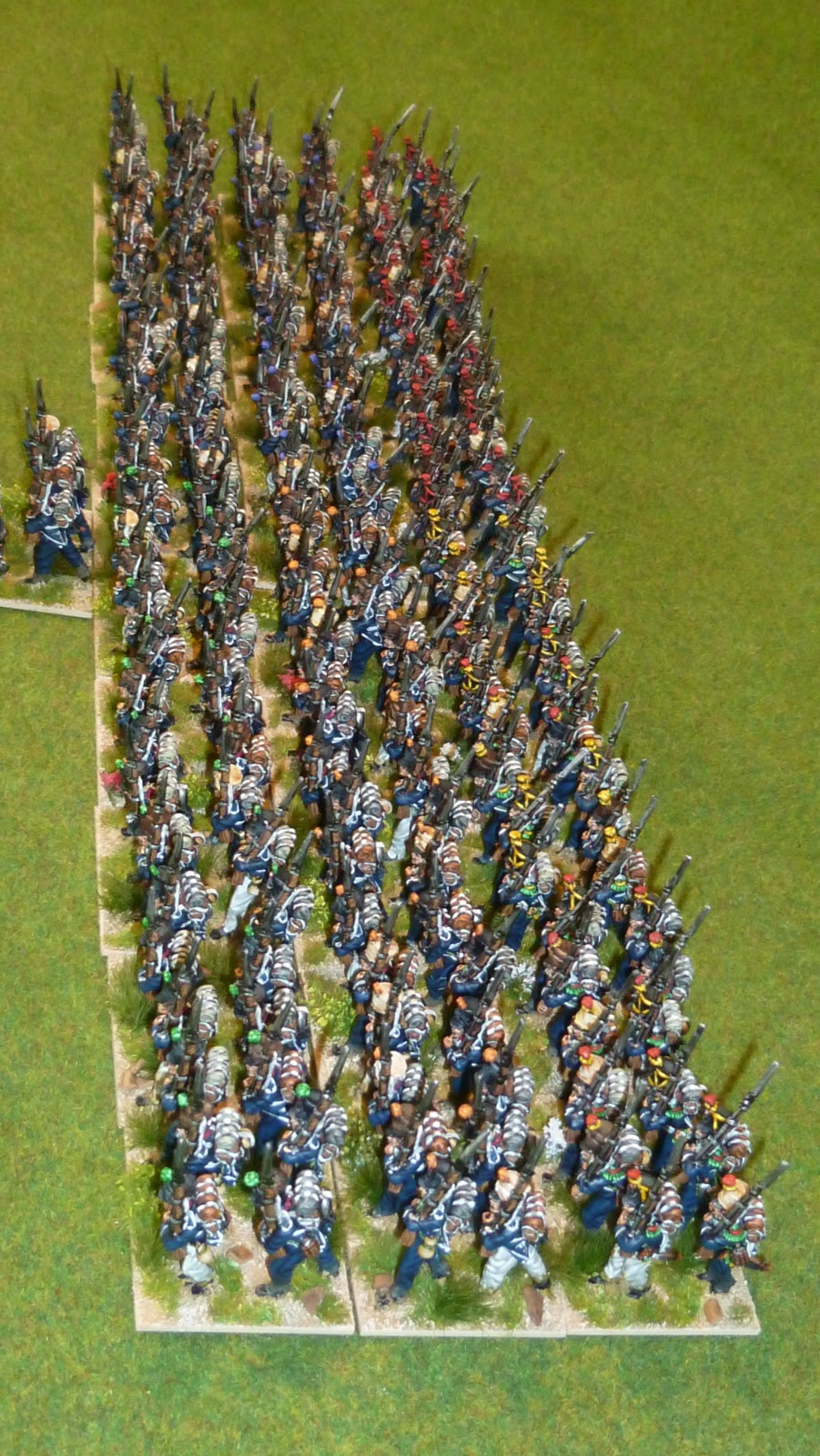 Beyond the 2015 1:3 scale games and at a later date, these newly painted figures will divide into 36 figure battalions. We plan to stage Quatre Bras, Plancenoit and maybe other Waterloo actions at 1:20 scale. This will mean a repainting of the pompoms and also the creation of all the 6 figure command stands that each battalion will require. So the figures will be able to fit into the two different ratio scenarios quite nicely. 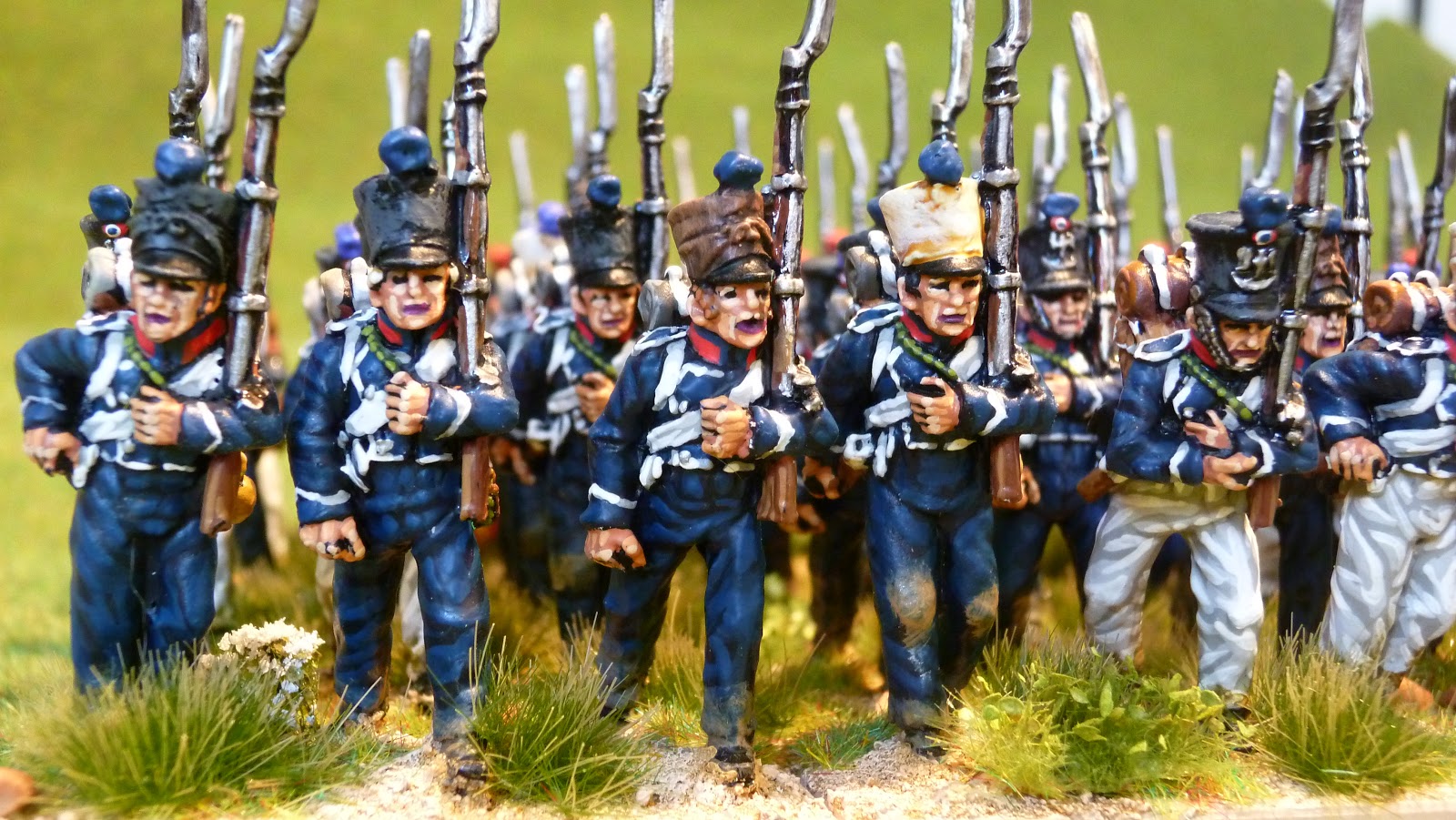 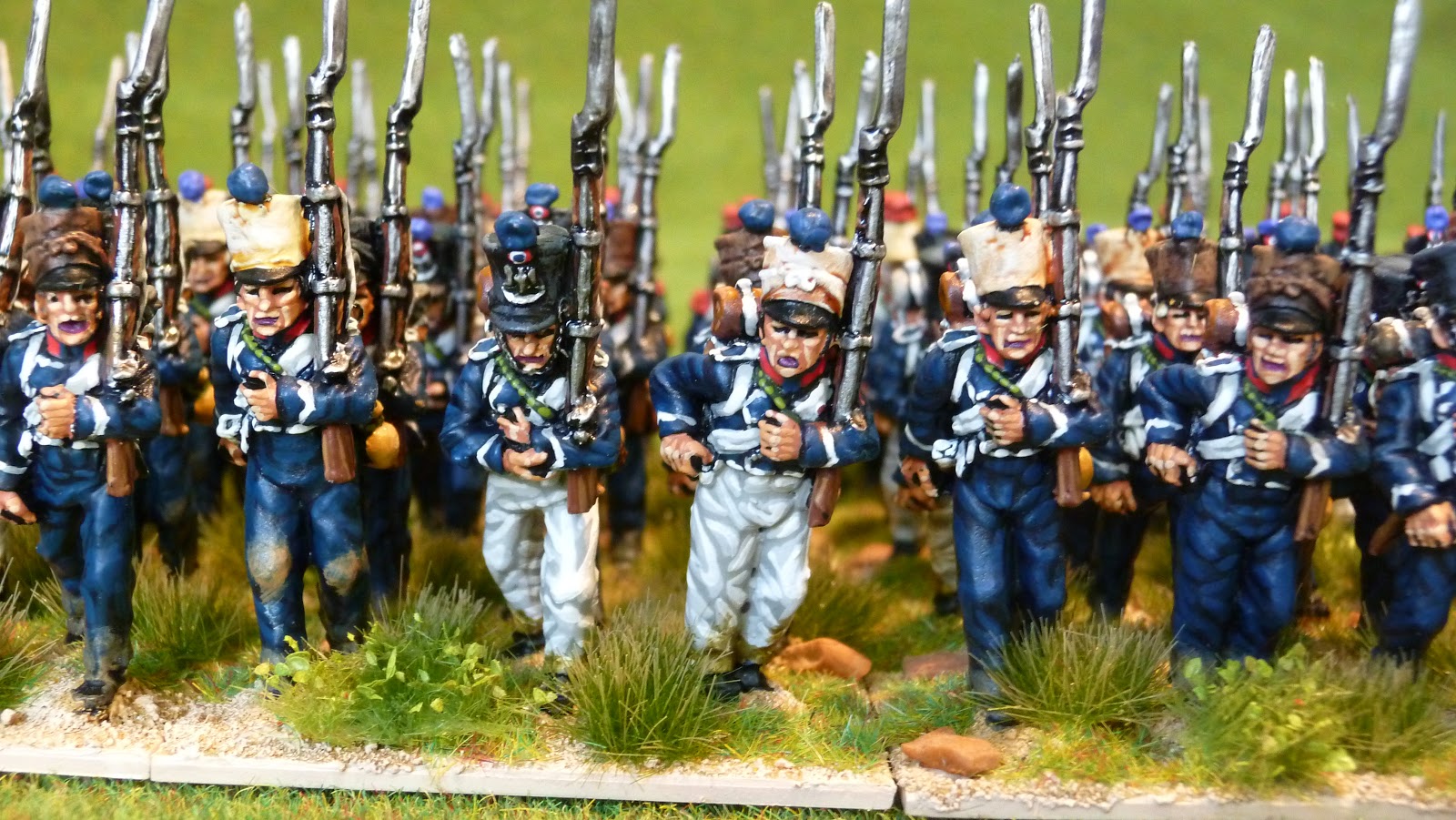 Here you can see the two French battalions completed to date, in a ‘10 litre really useful box’ storage tray which I buy from Hobby Craft. 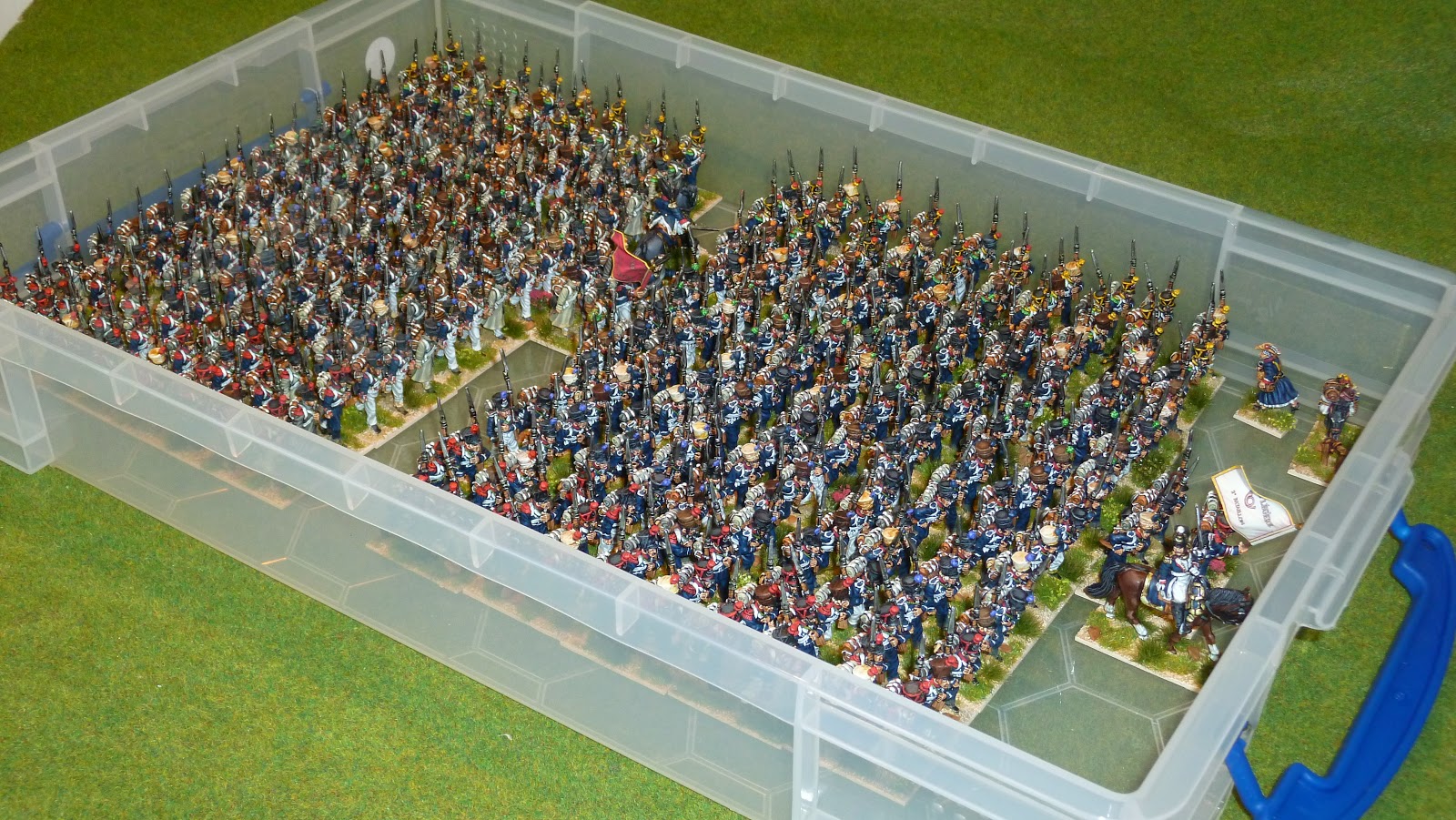 They are a reasonable price at just over £7 and hold up to 400 foot figures. The box is even tall enough for flags and lancer figures. I now have a collection of 11 of these boxes and they are ideal for transporting the figures to the various venues for the games. 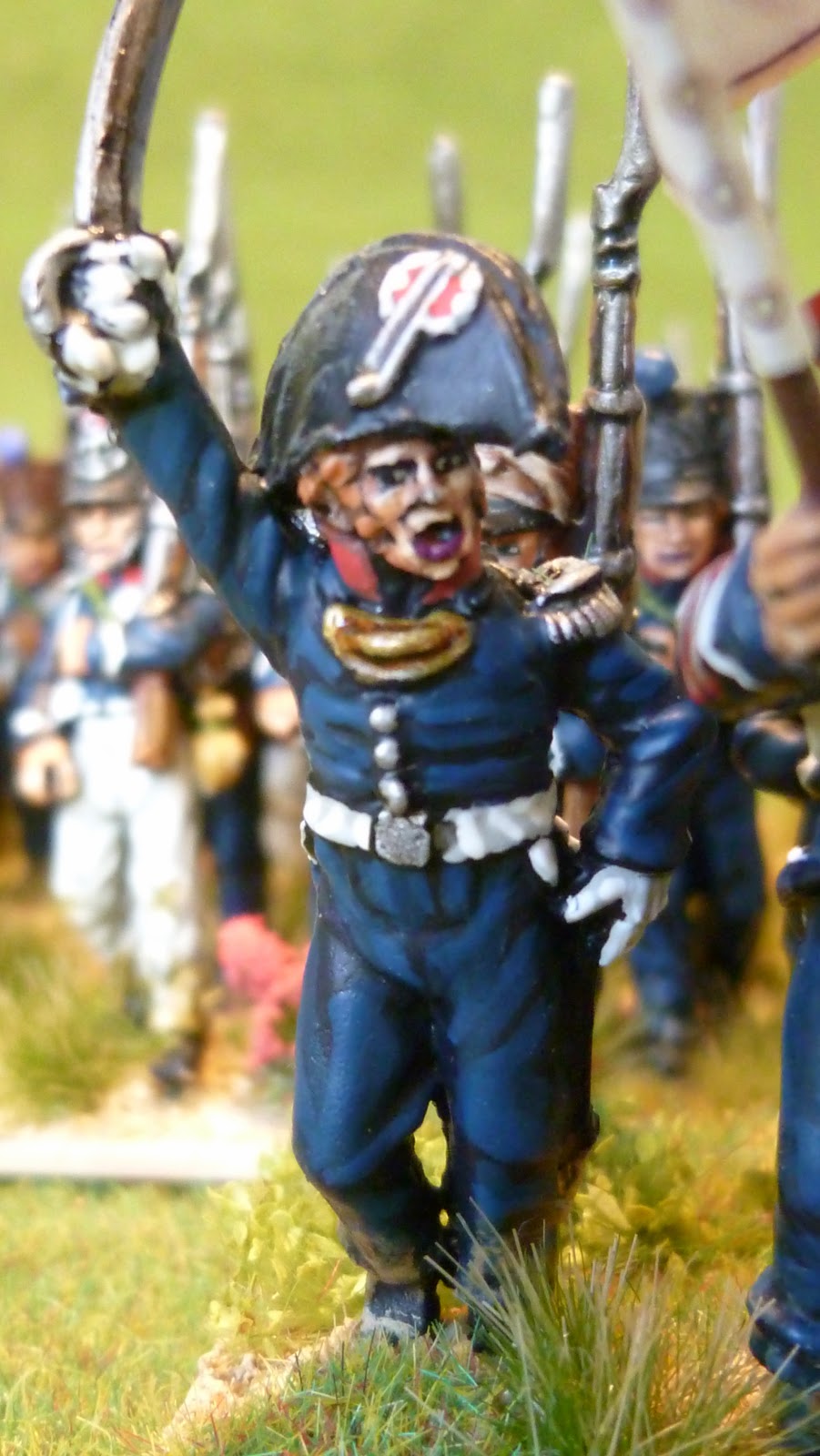 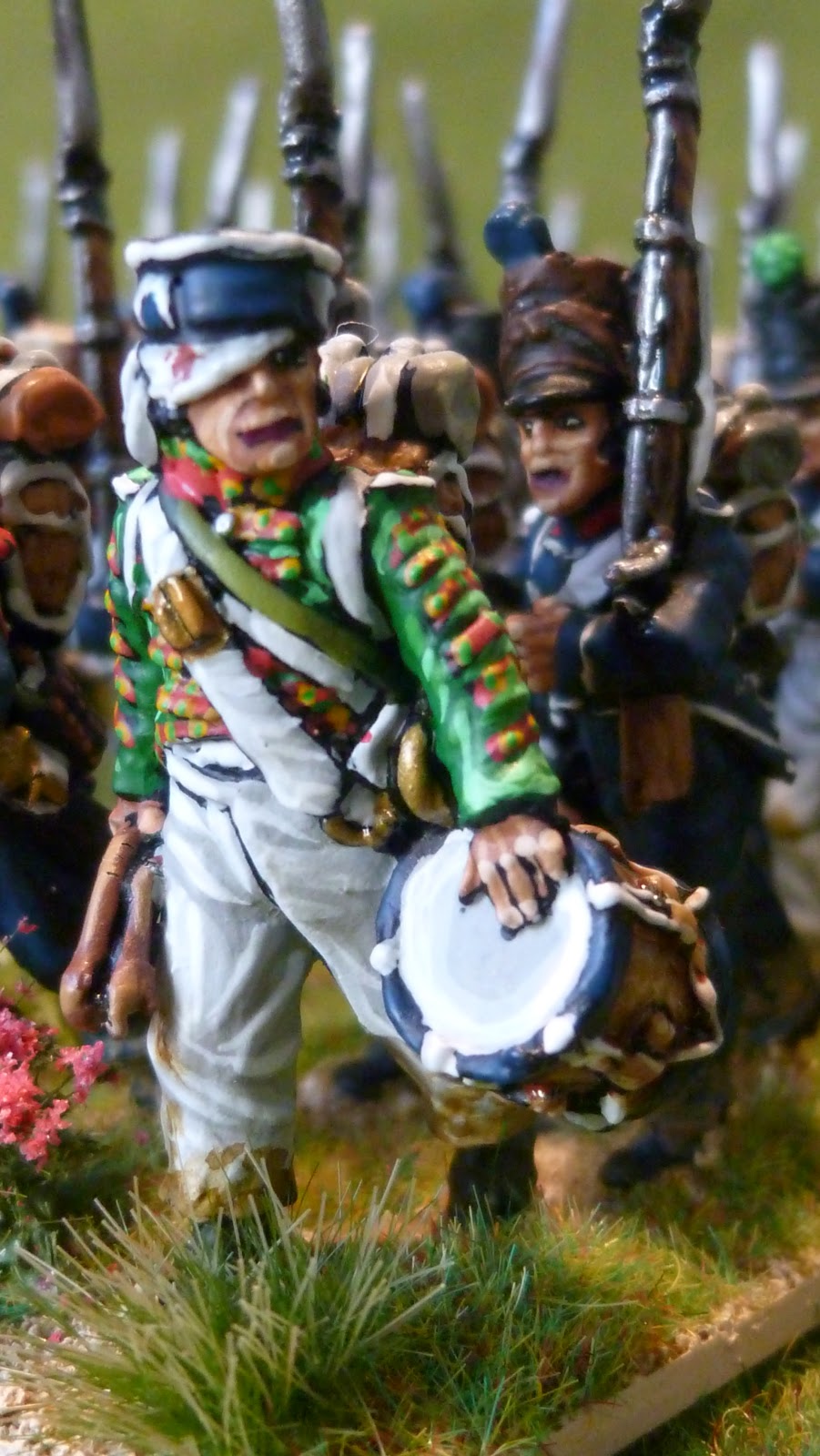 Thanks so much Kevin - they are an inspiration to us all.