As part of the normal cycle of a wargamer's life I often found my display cabinets getting full and new units beckoning me to give them shelf space. Decisions have to be made and, pretty though they may be, if an army isn't "earning it's keep" by regular appearances on the tabletop it either has to be boxed or sold .  So it was a couple of years ago when my 28mm Seven Years War and 10mm American War of Independence armies were blossoming I felt the decades-old 15mm Napoleonic armies had to go. Most of them were very old Minifigs which I'd ceased to like anyway, and also home cast from my own masters, but a couple of hundred were original late 1980s Anthony Barton designed Battle Honours miniatures, somewhat larger than the early Minifigs. I always loved these as they were anatomically perfect and had great detail and many were full of character. It was sad to get rid of them, but a friend had the artillery and generals so I still get to play with them occasionally, however, most went to the quick fix of being sold off rather cheaply at a Bring and Buy.

Just to remind me here are some photos, but I find I have very few 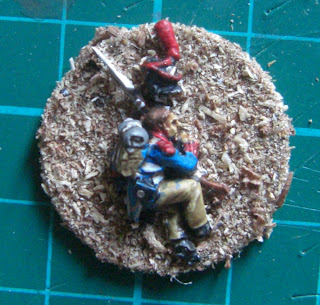 Well, these have all gone now but imagine my surprise when, trawling eBay, as one does, while getting rid of my World War Two 20mms, and AK47 15mms I stumbled upon a large collection of original and unpainted AB/BH miniatures being auctioned off in manageable lots. These items went on sale over several weeks during the Christmas and New Year period and I was lucky enough to win quite a few of them, and make the email  acquaintance of the seller who is a one-time professional figure painter and a talented jewelry designer. scwdesigns.co.uk

Now the real point of this blog is that I'm not reviving my 15mm Napoleonic armies as such but I am intending to paint these to a very nice standard, because I think they are worth the effort, and sell them at a small profit. They include a couple of Napoleon figures and dozens of marshals, generals and aides as well as Imperial Guard Grenadiers, Young Guard Mounted Chasseurs, Cuirassiers, Polish Infantry, British Light Dragoons in helmets, as well as bog standard French line infantry in greatcoats. My initial aim is to create useful command groups and individual Generals and ADCs that will be generic enough to fit with most rules. The first of these is Marshal Davout, and here is just one photo: 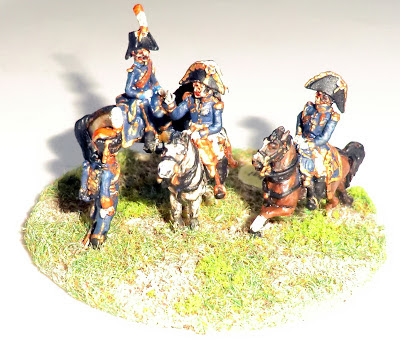 I hope you will want to see more as there are lots of close ups on the eBay advert, where you can also bid for it, if so inclined. Marshal Davout on eBay

I'm interested in advice from 15mm Napoleonic collectors as to how best to present them for sale. My idea is that infantry will be 4 figures in two ranks, and cavalry two figures side by side, on a 1 inch square base. Please add a comment here or email me. And if you'd like me to notify you personally when I do more for sale please let me know. chrisgregg@blueyonder.co.uk
Posted by Chris Gregg at 12:21