My blog has been quiet  for quite some time and I've been very busy, among other things, in organising several wargaming weekends for 2022, more on that in the next blog hopefully. More significantly I've been stunned by Mr Putin's action against Ukraine and it makes a mere hobby pale into insignificance compared to the plight of the many thousands he has put to flight and deprived of their homes.

Apart from making mere donations like so many others, last Sunday, realising that things for the women and children of Mariupol was going from bad to worse, I resolved to use what little skill I have to try to raise more money than I can afford myself.

Since then I've been trying to do the best job I can to pay tribute to the fighting spirit of the Ukrainian people in a painting of the Mariupol Hussars in 1812.  Admittedly then, their homeland was part of Russia and fighting to protect it from the French. How times and politics change!

So I present you with the finished result and invite you please to read on - find out more about the painting and how to bid.

This is an acrylic painting on canvas and is 16 inches x 12 inches (40cm x 30 cm), unframed, but with painted sides and is ready to hang or frame. 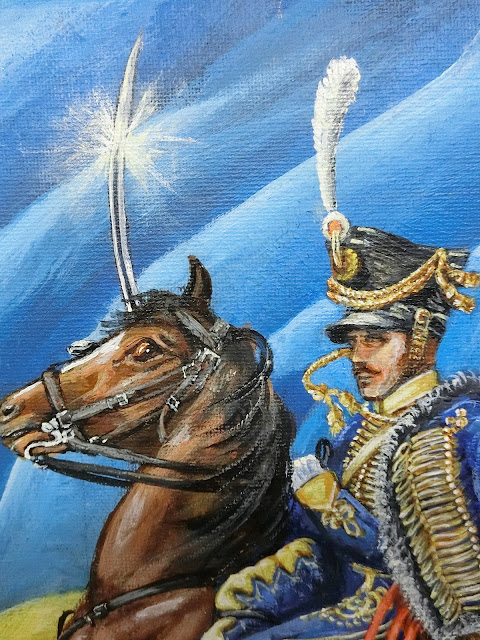 I had thought to just dash it out quickly and cash in, so to speak on the zeitgeist. But dashing off paintings is not my style and it soon became evident to me that as my clients like detail and accuracy I had to do my best within an artistic spirit, and it's taken about 15 hours work over 5 days. As every day has passed the plight of the besieged in Mariupol  has got worse and my sadness deepened. I'm privileged to know a few people, Ukrainian and Russian, in the UK and with relatives in those two blighted countries. They are all on the same side.........Just as the Ukrainians and Russians were in 1812 and in 1941. It's not my fight (yet!) but I'm hoping this painting can raise some money by an online auction. 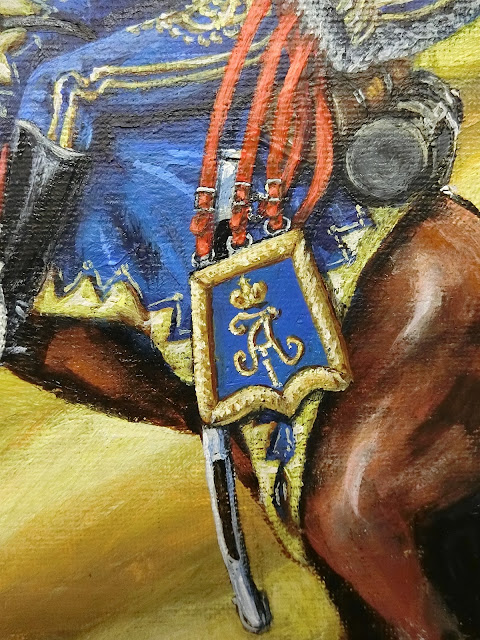 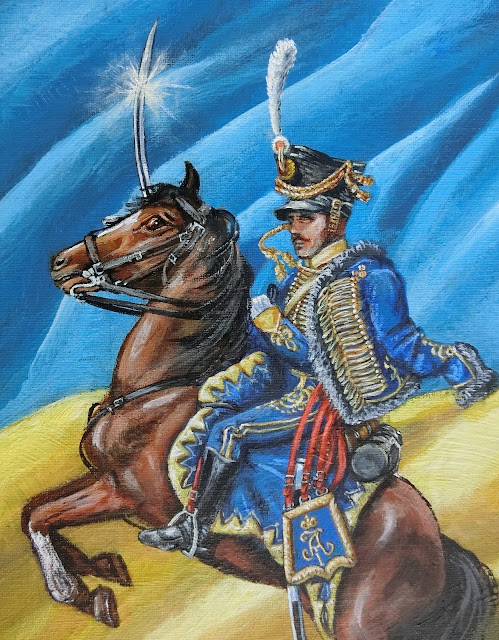 Many of my readers will be familiar with some obvious artistic influences from the Napoleonic era and in my humble way I hope I'm paying tribute to them too. Funny though, these were all painted in homage to an autocratic ruler who also had disregard for how may lives were lost in pursuit of his goal of a Europe united under his leadership!
Capturing enemy standards seems to be a theme of these glorifications of war from the 19th Century. For mine I have gone for the Ukrainian flag as a background to show solidarity, not captured, but preserved. The same colours are echoed in the Mariupol Hussars uniform and purists might say it should be "dark blue"; but I looked up all the sources I could and artistic representations varied from sky blue to dark blue and everything in between so I used my own instinct of what works best.
I've called it "Determination" and I've tried to reflect that in the expression of the Hussar and the defiance in the horse's eye (as in Gericault's too). The sun flashing on his blade is another "Don't mess with me" message which I get from the vox pop TV interviews with 2022 Ukrainian fighters.
So, maybe you have thought you might like one of my original paintings but never had the excuse. I'm auctioning this to the highest bidder via email or DM on social media by 11pm London time on Tuesday 15th March.  I will donate all the proceeds (minus insured postage to your location) to a suitable Ukrainian aid charity. I have in mind the UK Disasters Emergency Committee, which is reliable
https://www.dec.org.uk/appeal/ukraine-humanitarian-appeal

I normally sell this size picture for between £125 - £175 so I'm starting the bidding at £100 please. If there is only one bidder you'll get a bargain! But I hope it will raise considerably more!

Feel free to email me with questions , and especially bids! If there is anything to report I will post an update on here each day.

Thank you for whatever you are doing to help.

Monday 1500 - Going really well - Bidding now up to £250. Still a day and a bit to go so you still have plenty of time to cash in your Premium Bonds and bid!

Well I didn't get any further bids last night but really pleased to say that we have raised £250 on my work on this painting. Better yet, one of the thwarted bidders has donated another £100 for the DEC Ukraine appeal on the strength of me doing  a commission specially for him later this Summer - possibly of the Saxon Zastrow Cuirassiers fighting the Russians in 2012; look out for that in due course.

It's been an interesting but demanding exercise as I spent a lot of time promoting it round the web. Successful bids came via a personal email shot to over 60 addressees - many past or current art clients or wargamers.  I did a small a paid boost of my Instagram post which evidently reached over 5000 people and solicited about 100 "likes" but no direct bids. Useful knowledge for the future and for anyone with an Instagram account it seems a fair and cost effective way to promote yourself if you have something special to offer (Yeah, I know I'm normally irresistible anyway!!!!).

I only had one "adverse" comment via Instagram Direct Message. That was from a person called  "Elina" who complained that a Russian "imperialist" Hussar was an insult to Ukraine. I get the point but tried to address it in my blog. "She" said I should have done a Cossack, so I agreed and tried to engage her in helping me by advising of the right sort of Cossack so as not to cause offence again. Sadly by that time she had gone "User not found". So if you are out there "ellina" please get back in touch.

I find it ironic that in 1812 the Cossacks too were fighting the French in the "imperialist" Russian army. But more significantly, we wargamers and military art enthusiasts associate Hussars with hard living, bold, smartly dressed and daring soldiers but look on cossacks as pillaging near savages in tatty uniforms and who only fight from ambush. Hence my choice of a Hussar.....but I'm really pleased to see that with the help of UK-supplied anti-tank missiles the current Ukrainian soldiers are fighting successfully from ambush and knocking out hundreds, if not thousands, of Russian vehicles.........So the real choice for me is what art subject is likely to gain the best price for the cause! I think I made the right decision, I'm pleased with the painting and excited to think of where my buyer will put it in his home.

Thank you to everyone who helped, bid and supported in whatever way. They are fighting for us and it goes on.