I'm a very lucky man. Guy Barlow and Ken Marshall have been plotting with me (to keep us a bit sane during lockdown since last October's  Battle of Ellenbach ) on what to do this year. Rules for post lockdown get togethers were unclear till late February so we planned a cautious approach at first. We settled on a weekend in late May for the three of us to have a game on each day but we'd use the same hills,  road and river basics of a sculpted battlefield and just change the add-ons - buildings, woods etc. The aim was to minimise the time taken to change the scene to give more gaming time (Oh, well to be honest, I mean more time for a leisurely dinner and drinks at the  The Butchers Arms which will be fully open by then!)

Guy was first in with a great suggestion to try a "what if?" scenario based on the idea that Prince Charlie's rebel, sorry loyal Jacobite, Army marched out of Carlisle to meet an approaching Government force under General Wade somewhere near the village of Brampton in late November 1745. He characterised the little town as being in a moorland of undulating hills with some "scrubby trees" and the odd farm. Not much to go on but all I needed to get the creative juices flowing. I checked Google maps round Brampton for some clues and ground level photos and found there were some rivers and streams there but I had to use imagination to place the hills to be useful to us in a game. So I came up with this sketch map. Apologies to any readers who know the area - but this is 276 years ago - that's my excuse!

I was looking forward to the opportunity to make a winter battlefield that was basic moorland, yet I knew I'd have to use it for a Central European game or two as well. I had some good brown hills I made years ago from polystyrene and certainly they would save me the time and mess of making new ones but the colour would be wrong.  So I used their shapes as the basis to work on the sketch and after Guy approved it I set to work.
I was trying to take advantage of some fine Spring weather we had in the Cotswolds in April so my idea was to use the outdoor space to flatten lots of pre-loved cardboard packing boxes and glue them together with PVA, strengthened underneath by some simple wooden batons glued in place, and all weighted down to stop warping, or blowing away till it was sufficiently dry to store in the garage overnight.  I will let the photos tell the step by step construction 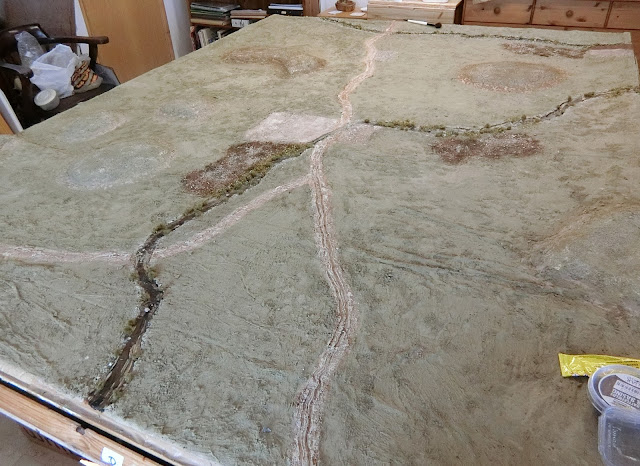 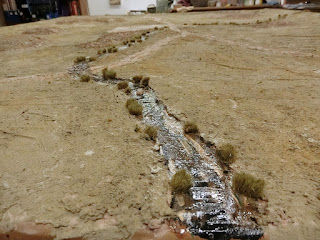 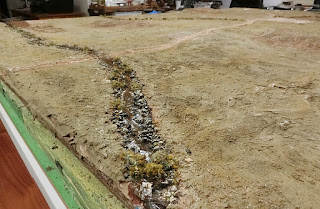 In the next post I will be showing how I'm converting this basic terrain for Ken's Imagi-nations SYW game and how I did the trees for both different terrains.
Please leave a comment and let me know if any of this is of use, thank you.
Chris

PS> I joked about Julia Bradbury but a bit of idle curiosity led me to this JB Cumbria walk - mind you that is Summer in the northern hills - brrrr!