Another Pirate treasure game for Christmas

Some years it does not work out favourably but this year we seem to be having my son and one daughter with their partners for Boxing Day and beyond, and they are all experienced at "Dad's games", so have agreed to humour me again.

Background
The last time this worked successfully was in 2011 and I was still playing in the garage at Cheltenham; you can refresh your memory if you wish at this blog post Santa shot in back shock horror. Since then the house moves have taken their toll by my selling all my Darkest Africa stuff including jungle foliage, crops and huts, and also my French and Indian Wars figures, so now I have to take a slightly different approach.  I still have the "marble" design sticky vinyl, backed onto hardwearing rubber from my sandtable, but it has been folded up for 6 years and now looks like big waves!!  But still - this is a fun game and, suspending disbelief as we wargamers do occasionally, this game is intended to pit four vaguely plausible groups on a quest for riches on the coast of Africa in about 1760, so includes giant mushrooms and sacred orchids!

The Terrain
First a couple of photos of the overall gaming table - my standard 8 feet by 6 feet. 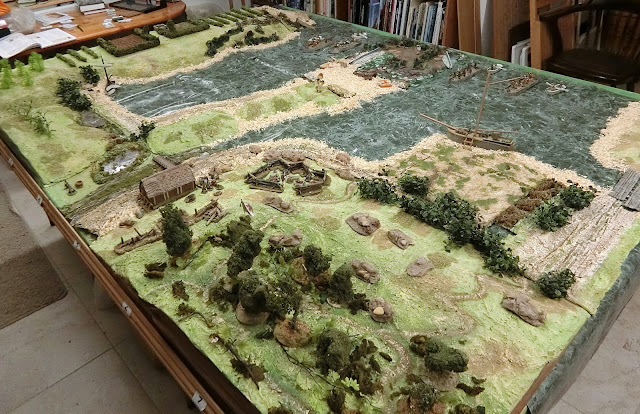 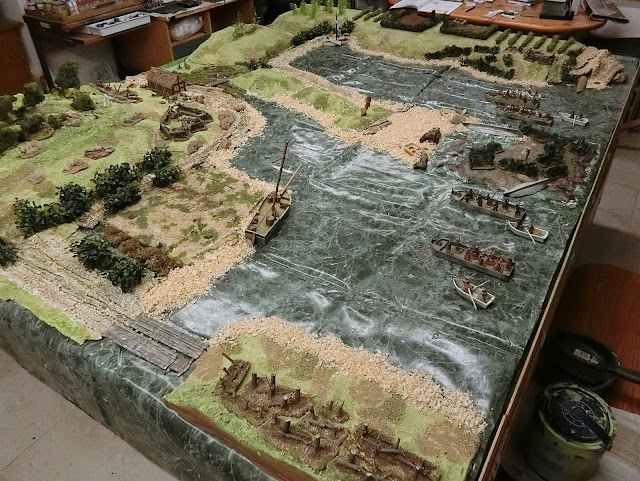 Trouble at Mango Island
Many of you will recognise that this is unashamedly, but loosely, based on Charles Grant's wonderful Christmas party search game "Trouble at Treasure Island". But my basic background this time is that King George has established a small colony on Mango Island on the West African coast providing slaves, coffee from a nearby plantation, and a trading post, as well as a well watered and sheltered anchorage in the double bay which is split by a triple-hill headland leading, at low tide, to "The Island of Wrecks".  The Plantation headland in the distance is rocky and at the near side of the bay is another headland reached by a very rickety causeway.  There are a couple of small batteries made of stockade logs (yes, R. L. Stevenson's "Treasure Island" is very much in mind!)

But there has been trouble on Mango Island. No communication of any kind has been received at Greenwich or Portsmouth for many, many weeks and the Royal Accountants want to know why the income is drying up - could it be disease, local rebellion or, God forbid, a French incursion taking over.

The Participants
Our protagonists consist of two main entities each divided into two parts, and this being a party game, no one should really completely trust their allies. They have arrived and anchored off the coast of Mango Island and are sending in smaller forces to explore, using barges and ships boats. Positions in the photos are just for atmosphere, we haven't properly deployed yet - the game is not till just after Christmas.

First we have the East European-Russian Pirate coalition. Led by Luskaya and her Looters they are Cossack style adventurers exploring the world for fame and plunder and have heard rumours about the rich pickings to be had in the Mango area. Luskaya has teamed up with Rakovsky and his Raiders as they share similar aims.

Around the same time the forces of the Crown have arrived and Captain Jonathan Chumley-Smythe is leading the shore party of The Revenue Men and British soldiers. Their ship has also given passage to "Squire" Trelawney and "Lady" Katherine ostensibly to reestablish the trade/slave business in Mango Bay, but they may not be all that they seem, some call them Trelawney's Treasure Seekers..........


The Obstacles
I've had great fun littering the table top with all sorts of features. Many may prove to be just decoration and others may hold vital clues to the Treasure, or whatever, the adventurers are seeking. These photos give a flavour, but by no means all the detail, of what may be in store.

The whole thing will be run by clues, success leads to the next clue and eventually to the treasure, and then get it "home",  assuming your rivals don't have other ideas. Chance cards will add a bit of seasonal spice and mirth.

Oh, I nearly forgot to mention the main buggeration factor. The local natives don't take kindly to having their land planted and their people taken as slaves by white folks, so they will be liberally in evidence making life difficult.....and that cooking pot down by the stream is boiling nicely............