Attempt on Machtigburg - an Imagi-Nation Mini Campaign, Part One

Attempt on Machtigburg, Part One - Introduction and Background

Reading the background to other wargamer's Imagi-Nation countries can be tedious, but reading about their activities can be stimulating - just look at the success of the Charles Grant family publications. I hope this series of blogs will fall into the latter category so I'll spare you too much "political" detail.

Project history
I started my Imagi-Nation armies back in about 2008 inspired by Henry Hyde's then new magazine "Battlegames" as a transition from my 28mm French and Indian War, so the nucleii were British and French armies of the 1750s.  I had just had a lovely holiday in the French Alps where one of my nieces lives and realised that the real province of Savoy (Savoie) offered me the potential I needed as it had French names and location on the French border with Switzerland and Italy.

Thus I could take the Games Workshop (basically late Medieval) fictitious campaign map for Warhammer games, which was based on Germany, and freely translate it. Forget Switzerland and my Savoy bordered Reikland. I created the "Duc de Deuxcheavaux"  (don't ask) as the ruler of Savoy who was thrusting and expansionist and looked to Louis XV to support his pretentions on Reikland's territory. The year was 1760 and France had lost a lot of colonial territory so was looking for revenge and replacement lands. Savoy could have French style imaginary units backed by real French historical units, though not strictly 1760.

Reikland, for its part, was the South-West "Elektorate" of "The Empire" and Count Gregorius (um, yes me when I choose to be) von Grunburg ruled the county bordering Savoy. Would you believe Gregorious favoured British style red uniforms? He could also call on any Germanic units that took my fancy, never mind that Prussia and Austria were at war most of the time! They were all nominally subserviant to "The Empress" in Vienna in my mind. 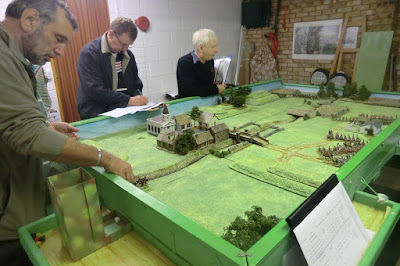 and the units and games have been featured a lot since, although I had a long break from early 2013 to mid 2016 forced by two house moves and the 2015 bicentennial of Waterloo. This coincided with the opportunity to try out Keith Flint's "Honours of War" (HoW) rules and along the way I had had tremendous stimulation from membership of John Ray's "A Military Gentleman of the 18th Century" Forum.

2016 was time to revive my campaign, which is always done by my trying to link most games by vague reference to the"map " which is now just in my head, and with characters and units that come and go as I pragmatically use them to suit the circumstances of the game. No one to please but me and the friends who I can persuade to partake :-).

Savoy's latest invasion of Reikland - Background
AMG led me to meet Ken Marshall who was happy to help me test HoW using the three test games in the rule book. By game 2 we dragged AMG member Guy Barlow along too and for game 3 brought in my old mate Kevin East. Each one was getting a bit larger and our confidence building.
All these have been fully blogged and with a rough background brief. Please see the links below if you need a reminder.
Battle of St Ulrich 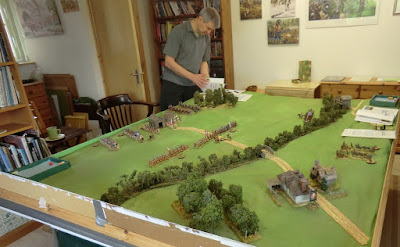 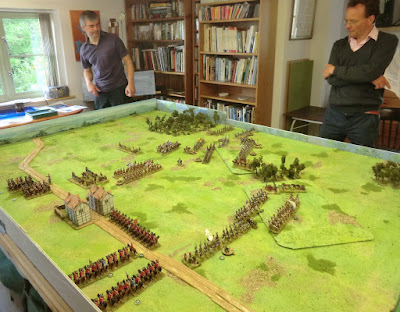 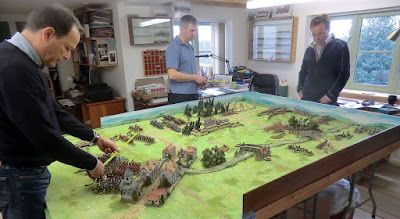 and I desperately wanted to expand the scope of our 18th Century games so launched into my first original HoW scenarios using this terrain, adapted, as my excuse.

Attempt on Machtigburg - the concept
Inspired by Charles S. Grant's various handy books on mini campaigns, (see for example Caliver Books website Search for Grant books at Caliver) I came up with the germ of three ideas for games, getting bigger each time, to be played over the Summer and Autumn.


This evolved into me and Ken playing "Vanguards in the Wahlental" the day before we both attended the splendid AMG 17 weekend at Kenilworth in mid-June. Here is an idea of what it looked like, Ken contributed  a fair amount of the figures. 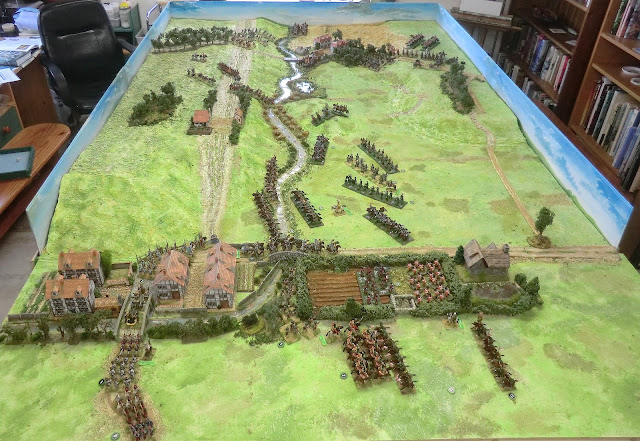 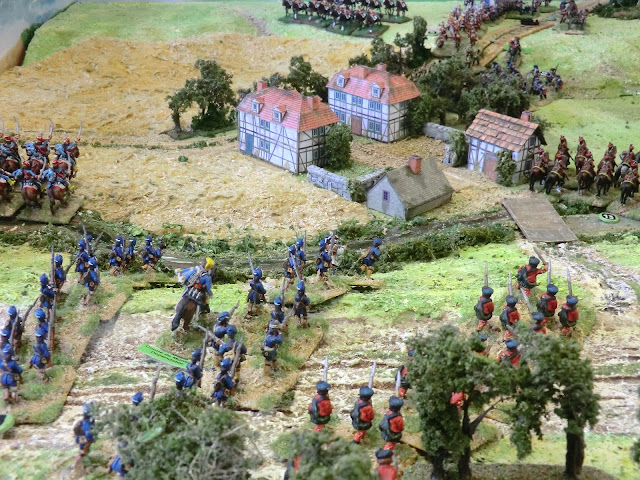 A month later we used a lot of Ken's Prussian style Imagi-Nation figures and he continued as the Reikland/Imperial commander and we invited Kevin along while I enjoyed umpiring "Siege Train in the Wahlental". A couple of pics of that one. 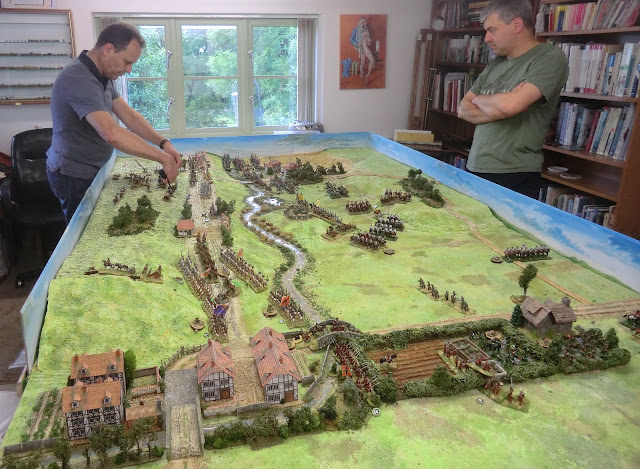 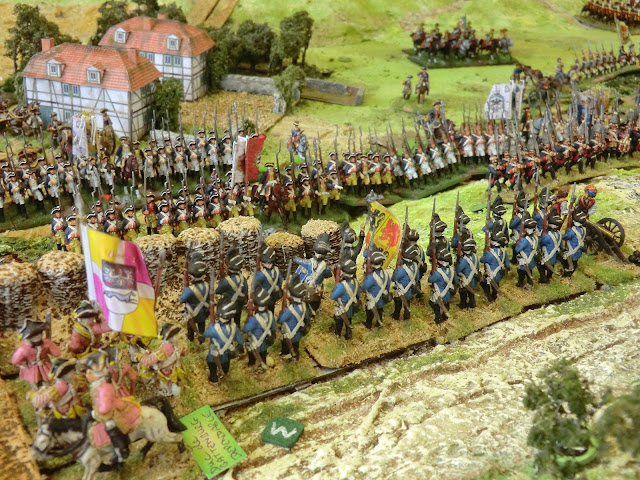 For the third and final battle, in early October, I was a very lucky chap as both Ken and Guy provided most of the troops. These were a good part of Ken's completed Imagi-nation forces - an interesting mix of British/Hanoverian/Prussian and white coated "Austrians", and an unknown part of the total of Guy's historical 1740-50s style French, British and Hanoverian Western theatre armies. All these were Minden, Crann Tara or Fife and Drum figures. They were supplemented in places by my eclectic mix of historical and Imagi-nation regiments owing no allegiance to one style of manufacturer. We mustered about 1500 figures for the day. Probably about another 500 or more stayed on my shelves for another time.  Better yet we were joined by Gloucestershire "locals" Roy Boss of Cirencester, and HoW author Keith Flint of Northleach.   Again I was GM and umpire/tea maker, which is my favoured role.
And now some taster pics from the "Battle of Edelstein" 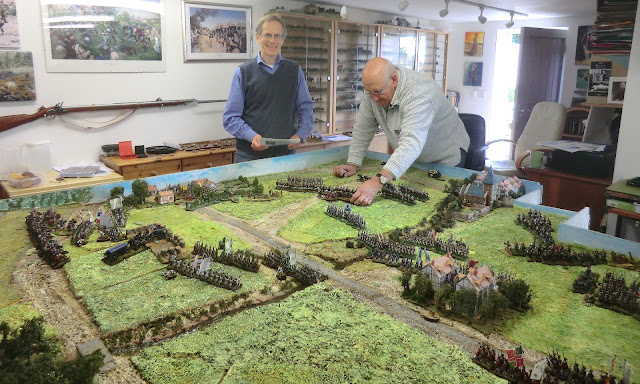 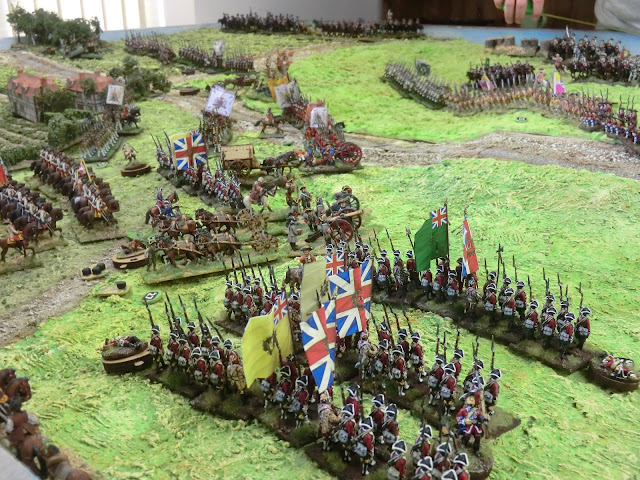 That should give you some idea of the scope of what I expect to be describing over the next few weeks. (Though not all at once as I feel some Hussarette paintings beckoning to be shown!)  I'll include the full briefs as Downloads in the Imagi-Nation sidebar  as I go along.
I will leave you with the map of the Wahl Valley I devised to use the adapted Napoleonic terrain for the first two games. Please click to expand.