I'm long overdue in posting photos on the second day of our Third-rules-test-game, but have a look at the link if you want a reminder of where we got to in February. The second day of that test game was on 1st March and since the week following that game it's been non-stop for me working on various aspects of the four Waterloo weekends we have to look forward to here in The Cotswolds. More on that in later posts, but for now, a daunting task.
The main reason for the delay in blogging this was just the sheer quantity of nice photos, both mine and Kevin's, so I'll have to break them up into manageable chunks and let the captions be brief. I'll assume you've read the earlier posts and just a  reminder of key points for new comers:
- We are refighting segments of the Waterloo battlefield at La Haye Sainte in July and Hougoumont in September.
- Both are at 1:3 scale on the ground and in figure:man ratio.
- We are testing special rules written for those days called "With MacDonnell and Baring 1815"
- The terrains will be built specially; this test is just "generic" with a rough and ready terrain cloth over wood, cardboard and paper.
- 28mm figures from various collections, mostly compatible! 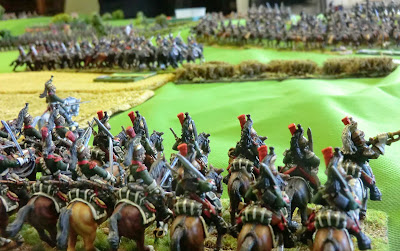 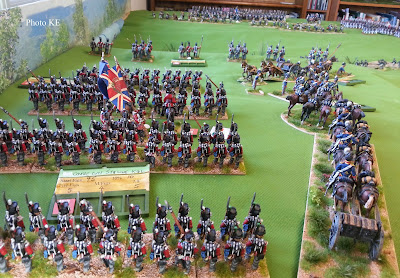 That's all I have time for at the moment, so I'll get it published rather than delay and make too long a post. Hopefully more tomorrow.