What with all  the packing, selling on EBay and moving house it's been some time since I've been able to do any oil painting. Additionally, I had a big and  complicated commission to do illustrating a scene from one of Ian Allen's "Chronicles of Umpopoland", and that took me about a month last Autumn. That's now safely framed and up on his wall and you can see a picture of it at my website chris gregg paintings. If you want to know the background to it please comment and Ian or I will reply.  So the Hussarette project took a back seat after my "historical research" before Summer had faded away last year; here's a reminder   can-blackpowder-era-cavalry-really-fire-mounted.

But when I least expected it along came a commission for a Hussarette to be a companion piece for Lucille of Lauzun's Legion. Since these posts have become my most popular over the months I thought the least I could do was to bring you the story of how I found and employed my latest model, whom I will call Ella.

It was on a sunny day last Summer when I was stewarding at an art exhibition. Exhibitors at this show have to volunteer to steward in pairs and the artist colleague on my session was having trouble to commit to the whole 4 hours. So she persuaded her sister, Ella, to do an hour's duty. And what a pleasant and helpful companion she turned out to be. Ella is Ukrainian and just happened to be over in England to stay with her sister. Not only is she pretty but intelligent too, and studying for a post graduate scientific qualification in France.  I always tend to have my camera with me as an artist never knows when inspiration will strike, and I had been collecting photos of likely ladies for handmaidens in the Umpopoland commission mentioned above. Eventually I plucked up the courage to ask Ella if I could take some photos of her, and she willingly agreed. She had to go back to France that day but left with the thought that she would be back at Christmas and would like to earn some money modelling for a photo-shoot for paintings. 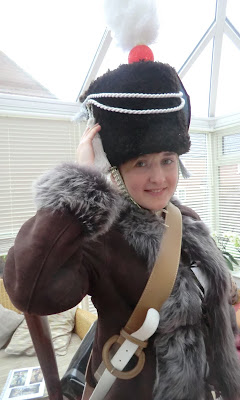 After the exhibition I had shown her photos to one of my patrons who said, as she was Ukrainian, I should ask her to pose as a female Cossack. This seemed like a good idea and I kept it "up my sleeve". However, not long before Christmas I got the next commission in the shape of a request to do a Hussarette emulating a pose from an existing miniature of a futuristic or steam punk female fighter in tight breeches. When Ella got in touch on her return to England I just knew she'd be great in that guise.

So it was that on a very wet day shortly after Christmas I found myself in a light and airy conservatory in a southern suburb of Gloucester having to spend 3 hours with Ella and her sister while she got made up and dressed, and then undressed, for the camera. It's a hard life, but someone has to do it for the sake of our European cultural heritage :-)

Her artist sister was a marvellous help, organising all sorts of outfits, jewelry and hairstyles for my various ideas. The commissioned Hussarette was the main item on my agenda since the client would be subsidising her fee. But I had also asked for any "authentic looking" Ukrainian gear, and among the leading items was a superb fur lined jacket just right to do duty as a Hussar's pelisse but without all the lace.  In addition Ella had high boots, which although they had stiletto heels, gave a very sexy edge to the idea of hussar riding boots. Also equipped with my cobbled together belts, sabretache, ammo pouch, and fur colback we applied the French Napoleonic-style weaponry in various combinations.  So, hundreds of photos later I had a great variety of poses to choose from for my commission and many more options for other paintings. Here are some examples: 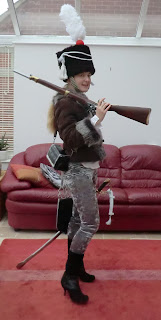 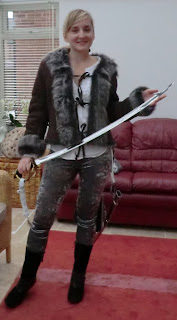 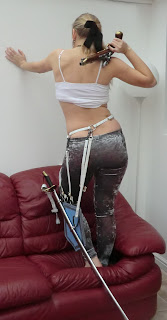 I had a vision for the tough "Cossack lady" with a floppy fur hat but we did not have one between us, instead what I got was a sexy version of a sweet Ukrainian traditional maiden, with addition of weaponry - like this:

And just for variety - one of the bi-products of the Ukrainian culture was evidently the black clad secret police! There were quite a few leather-look coats and boots to choose from in the dress-up box so we made full use of them. 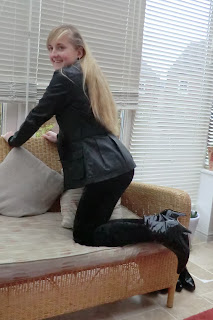 A focus group I tested last year for pin-up subjects suggested posing ladies with classic cars and motor bikes, and so the leather gear seemed perfect. I've got lots of reference material for Harley-Davidsons but just needed the girl, so my Ukrainian beauty posed for them too - but,  like acting for CGI with a blue screen, we had to imagine the motorbike! 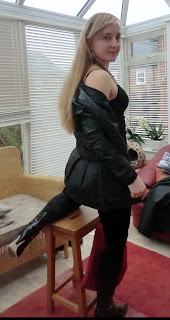 Within a week or two I'll show you the finished result of the Hussarette painting, and the best news on that is the client loved Ella so much he wanted two of her in one painting, and in the gorgeous combinations of colours of  the French Legion Etrangere in the American War of Independence. So look out for that soon.

I hope you've enjoyed this taster of one side of my work but carrying it on depends on the support I get. So please comment on this blog, or email me Chris Gregg if you have ideas or want to commission me with a painting yourself. Complete discretion guaranteed.