.........The bedroom in Schloss Grunburg was surprisingly warm considering the late hour. Countess Natasha Gruzinskaya slipped off her pelisse and settled into the large buttoned sofa so thoughtfully placed by the servants near the fire. Her skin glowed with the arousal of personal combat enhanced by the firelight.  She was quite relaxed.....what could have been an arduous duel with Count Gregorius' fencing master, Captain Metternich, had ended quickly. She reflected on her deft movements and smirked.  Gregorius had asked her why she was naked and she told him "Better to fight" ....but her only garment, the yellow Gruzinsky Hussars pelisse, was actually the key to victory for she had whipped it off and thwarted Metternich's first strike.....his blade slashed through the sleeve and got tangled in the loops and cords. She pulled it aside and delivered a disabling blow to his sword arm. He would live but the Count would be needing a new fencing master, or mistress... 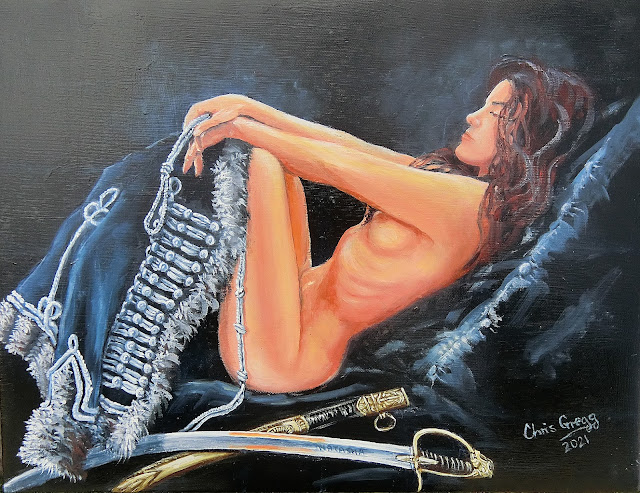 Although she was a prisoner, the Count and the assembled guards from the Grunburg Dragoons stepped back in awe and respect, for Metternich was known to be a formidable opponent, and yet here he lay bleeding and looking helpless.

There was not a scratch on Natasha but now she only had on her hat and her boots and her pelisse was in tatters so Gregorius instructed one of his aides to give her his own blue pelisse. To imply that she needed clothing to recover her dignity would be far from the truth for she stood erect and elegant, the Croat's oriental sabre poised delicately but purposefully in her hand, as if to imply "Any one else want the same?"

"Countess......", Gregorius sounded friendly...." you have done well, and as my prisoner I put you on your officer's parole not to try to escape. Now please give me back the beautiful weapon I lent you and we shall return yours to you. Then you may have a guest room and I will see you shortly."

So, in that guest room, Natasha contemplates her fate. Will she ever return to the Russian Army again? Maybe Grunburg could provide a new home and new adventures throughout Europe in the Count's service, who knows?

But we, dear readers, know better, don't we?

This story, and new painting, is just continuing the saga of the reckless and semi-naked Natasha through the Seven Years War. Here is a link to my original painting and first photoshoot with my Russian model. And as a reminder, the first time she came to be painted chronologically in 1755 plus links to the other incidents concerning her and Grunburg.

Once again an oil painting on canvas, 16 inches x 12 inches and available for sale at around my usual very affordable price for this size. Please take a look at my art website for more detailed photos and a link through to a whole series of photos showing how the painting was created, I hope you enjoy it.

As I have said before, I am open to commissions for military subjects or  your own fantasy Hussarette/Chasseurette/Lancerette etc, just get in touch via the website or direct email and we can discuss.