Apologies for the long delay, I thought I ought to get back to this Imagi-Nations mini campaign set in 1760 and here is a link to the blog post with the background to the French/Savoy attempt on Machtigburg

The first scenario "Vanguards in the Wahlental" was deliberately designed to use the considerable numbers of Light Troops we could muster. It was petite guerre gone grande and kept Ken and I amused for a whole day back in June 2017. The full briefs and orders of battle for both sides can be found in the Downloads sidebar at right under Imagi-Nations Collection, or at this link 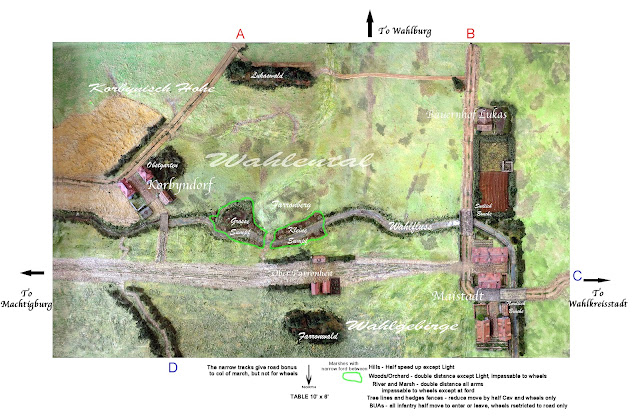 The French/Savoy force under General de Busserole (commanded by me) was to enter within 12 inches of points C and D. My force was basically three small legions (acting in the rules as brigades) which between them had light cavalry, light infantry, light artillery, dragoons and grenadiers; there was also a light infantry brigade, a small Grenadier brigade, an independent light battery and the independent Hussars de Bercheny.  Busserole's objective was to secure the route through the Wahl Valley by dominating the valley and Korbynisch Hohe beyond so that a reinforcing army could escort the siege train safely from Wahlkreisstadt to Machtigburg.

The Imperial/Reikland force was commanded by Ken in the form of Major General Graf von Draskowitz. His objective was essentially the opposite - to block the main route by occupying the Wahlgebirge ridge and the small tactically important hill known as Farronberg. Capturing both built up areas (BUA) and the river crossings was also part of the plan to dominate the valley. To do it Ken's force was a balance for mine but very differently composed. He had five brigades, an irregular one of Grenzers and Lancers, two of Jaeger/Freicorps, a large Hussar brigade, a small Grenadier brigade, and an independent Jaeger zu Pferd regiment of two small companies - effectively dragoons (in fact the models were Ken's 17th Light Dragoons lookalikes). He entered within 12 inches of points A and B.

We both had a few restrictions on disposing brigades to entry points but basically freely marked up the maps in advance showing our columns of march.
I didn't take any notes and it is over 6 months ago so I will have to let the photos do the talking. 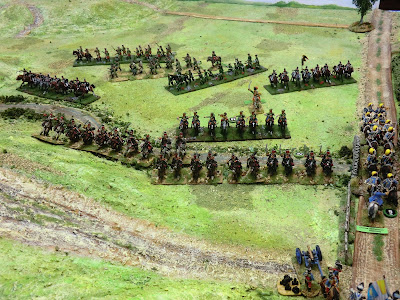 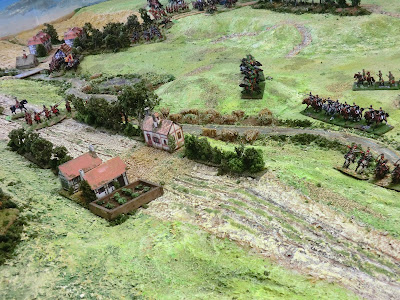 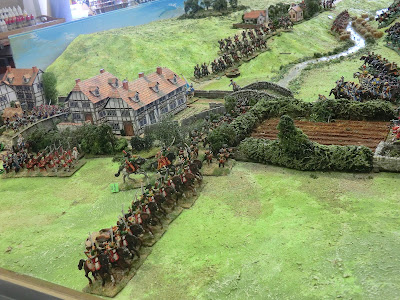 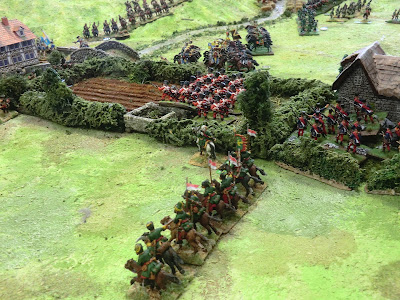 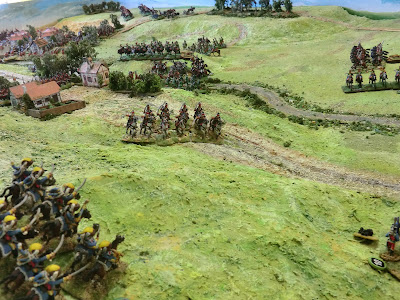 This was my first original game using "Honours of War".  I was keen to test the rules thoroughly for light and irregular/inferior units and Legions within the command structure of the rules, as well as get a result we could use as the basis for the next game. Both aims were achieved and HoW once again, proved a vehicle for a highly entertaining mid-18th century game with lots of ebb and flow and unpredictability.

Ken is an opponent not to be be underestimated and he showed great skill in achieving limited but useful objectives while preserving, I think, all but two of his units. Securing Korbyndorf and the Farronberg would prove to be highly useful in contesting the passage of the French Army towards Machtigburg, as we shall see in the next scenario.........