Count Gruzinsky peered out of the window of his Prague lodgings into the warm June night. Wherever had his daughter got to?....and then by the flickering lamplight that gave a friendly glow to the yard of the inn, he saw her.

Walking proud and erect in her uniform of Honorary Colonel of the Gruskinsky Hussars, drawn sabre in hand, she came elegantly towards the inn. But what are those two points casting shadows with every stride?  Oh no, she has been in one of her sabre contests again and she always casts aside her dolman when she fights..........

Countess Natasha Gruzinskaya was accompanying her father on a Russian diplomatic mission to the court of Empress Maria Theresa. It was June 1756 and the Count was to discuss mutual cooperation with Austria in the face of growing belligerence from the upstart Frederick II of Prussia. This stop at Prague was a convenient rest on the way to Vienna, however, diplomacy is boring and a girl must find her amusement somewhere......
Those Austrian officers of the Dessewffy Hussar Regiment at the tavern opposite had provided her with a slight diversion, but she had floored all three of them without suffering a scratch herself.........And next..... some more fun with her ADC, Anton, who was waiting at the inn's backdoor.

But first she had to pass a group of drunken Dessewffy troopers who were billeted in the courtyard.....
"Wie gehts Fraulein?" said  a voice from the dark. "Ich mochte rollen im Heu mit dich, mag dich auch?"
What impertinence she thought and turned her head to give an icy stare. The sabre flashed quickly...and the man would not roll in the hay with anyone ever again.......

Now for a bath and something stiff with Anton. 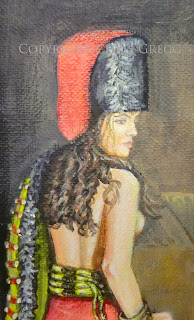 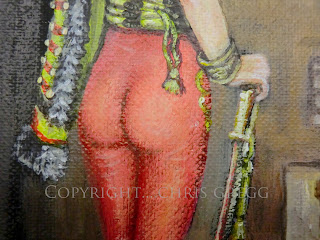 With grateful thanks to Robbie Rodiss who came up with his interpretation of the Dessewffy Hussars for me when I asked about his favourite Austrian uniform, and then he also said how he liked the Russian Gruzinsky Hussar uniform. Of course I had already done that in Hussarette form, see
Natasha and Count Gregorius, and so I felt compelled to put the two together for this little prequel, showing another example of Natasha's liking for undressed combat. Also thanks again to Russian model Yara for the inspiration through her steely portrayal of a very tough lady hussar.

But the story of my latest batch of Hussarette paintings didn't really start there at all........

I had offered to put on a display of my military paintings and drawings at AMG 17 (see the bottom of my previous post for pictures) and so was in the mood for trying to find suitable subjects. Then all of a sudden there seemed to be a purge of members of the A Military Gentleman Forum and a certain amount of disquiet expressed at various locations on-line. This took an amusing turn when the talented flagmaker, Captain William (Bill ) Walker of Florida USA, designed a beautiful Rococo style cartouche bearing the name "Gentlemen in Exile" in black and gold. Immediately the idea flashed to me that a Hussarette in black and gold uniform would look splendid with Bill's design as a sabretache monogram. Permission was obtained to use it and I was about to start when Colin Ashton cheekily hijacked my plan with the suggestion that the historic Prussian Hussar Regiment Nr 5, Von Reusch, wore black and would also look great as a Hussarette. Colin is already a client of my female military genre so was to be taken seriously, and to cut a long story short, he helped develop the ideas for this lovely painting of a lady whom we have called Rosamunde von Reusch.

This one was also based on Yara at a photo session where she was just wearing hat, waistcoat and boots.....and carbine. So I have developed the waistcoat into a dolman, the fur colpack became a mirliton, complete with cords, plume and trailing wing and we've imagined her just relaxing with unbuttoned breeches. I've not gone for a likeness but for this pose Yara had discarded the warlike facade and I got a flash of the eyes and cheeky smile which I have tried to retain. Colin seemed pleased to take delivery of Rosamunde at AMG 17 and display her on his blog here

And now back to Captain Bill's inspiration.  I needed a pose and face that said "I can be lethal, don't mess with me" because this was to be another of my empowered females. After all she was representing the Exiles from the aforementioned Forum and at that time many seemed like they were metaphorically sharpening their sabres.

Searching my archives I found the lovely young Ukrainian, Ella, wearing her "pelisse" opened, tight leggings, and booted foot up on a sofa and with the slung sabre just being drawn threateningly - perfect. Except she was far too sweet for this role - take a look here if you don't remember her. So I managed to find the required super-cool but slightly pouting expression on line, and this is how Lola ended up.

I explained to Bill that Lola is not a Gentleman (despite the nod to Ray Davies' eponymous hit song of the 1960s) and so preferred the term "Legion des Refuses" as the parallel for this artist was uncannily like Edouard Manet's founding of the Salon des Refuses for the Impressionist rejects of the 1874 exhibition of the Academie Francaise. Bill was happy with that and so was I because I am  a great fan of Legions in my Imagi-Nations wargaming (a report of a game with lots of them will follow shortly). But I'm not sure which came first, my Legion idea or Bill's creation of Lady Lola's Legion in miniature. The man works so fast he had three units take the field before my painting was finished, and each had a unique flag!  Do take a look at some of them on Bill's Duchy of Beerstein blog, such as this one

So Captain Bill bought the painting of Lola and also took a liking to the "cherry bottomed Hussarette" as he termed Natasha. Both ladies are now safely in his man cave in Florida.

I hope this little story will show that the Hussarette project is alive and well, that I love being steered towards an artistic creation, especially one involving females in uniform, and that would-be clients can participate in the enjoyable enterprise.  Just email me with your ideas or requirements, prices are very affordable.

A NOTE ABOUT COPYRIGHT
I hope you enjoy the pictures. If you do feel the urge to post any of them elsewhere please respect my copyright and give me credit by name and a link to this blog. Thank you, Chris G.