Clash at Kutzdorf - our second HoW test game

I got very many pleasant comments on my first foray into playing with the Honours of War rules - St Ulrich scenario so thank you to all who visited and commented. Here is my take on the second scenario from the book, aided and abetted by fellow members of the A Military Gentleman (AMG) Forum- Ken and Guy, who travelled to the Cotswolds from Wiltshire and Windsor respectively, with me as organiser and umpire.

Here they are acting up a bit near the start of the game. 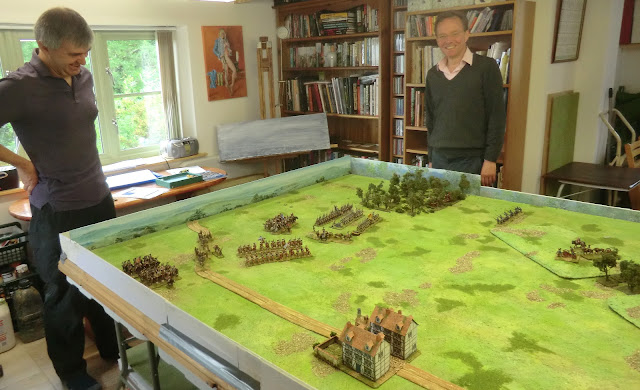 As with the first test I enlarged both the battlefield and the forces to make better use of the 8 ft x 6 ft playing area. In doing so I tried to keep to the spirit of the scenario but gave potential Victory Points for various bits of terrain and allowed free deployment within the same start lines as the original.

Here is my map with deployment areas marked. 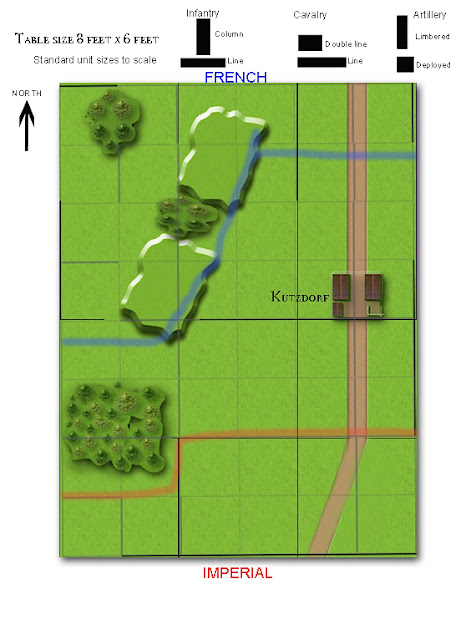 And an edited version of the briefings for both sides:

The blue line shows your deployment limit and the map gives some idea of the size of standard units, please allow a bit more space for large units.

Background and objective
The Chevalier de Neuvalee failed twice in his attempt to break across the border into Grunburg county of the Elektorate of Reikland (A vassal of the Empire). That was the two actions at St Ulrich. It is now a day later and Neuvalee has retreated to high ground overlooking the village of Kutzdorf. Some of the St Ulrich units are recovering but his army has been reinforced by more French, and a light infantry unit from Savoy. However, the Reikland forces and their Imperial backers have been emboldened by victory and are pressing on into this area of French influence. Your orders are  to nip this invasion in the bud before things get serious, so you are to take and hold Kutzdorf villlage (1 Army Point) and counter attack the Count of Grunburg's force and drive it away. In case of the need for further reinforcements it is vital you do not lose the high ground (1 Army point for each Hill) or the road North of Kutzdorf (1 Army Point).

Intelligence
Grunburg's force is slightly larger than yours and he has more artillery and more light infantry. Also the Elite units of the Erbprinz Grenadiers and the Grunburg Dragoon Regiment, which inflicted such damage at St Ulrich, are believed to be in the forefront of this invading force. They can be expected to be deployed up to the red line on the map.

Background and objective
The Chevalier de Neuvalee failed twice in his attempt to break across the border into Grunburg county of the Elektorate of Reikland (A vassal of the Empire). That was the two actions at St Ulrich. It is now a day later and Neuvalee has evidently retreated to high ground overlooking the village of Kutzdorf.  However, the Reikland forces and your Imperial backers have been emboldened by victory and you have been ordered to press on into this area of French influence and cause further embarrassment for the French and Savoy army.  So your initial aim is to take and hold Kutzdorf village (1 Army Point) as a forward base and attack the Chevalier on the high ground to command the terrain beyond (1 Army point for each Hill). Obviously, in order to proceed once the French are beaten, you will need also to command the road North of Kutzdorf (1 Army Point).

Intelligence
Your Grunburg/Imperial force is slightly larger than your opponent and you have more artillery and more light infantry. You can expect most of the regiments that took part at St Ulrich to be recovering some way off by now, but reconnaissance suggests that they have been replaced by even more, and fresh, troops. They can be expected to be deployed up to the blue line on the map, and the presence of small skirmishing parties indicates that light infantry are now present too.

And the Orders of Battle for each side giving the names of the units from my pseudo-historical Imagi-nation armies and their quality and size for the purposes of HoW.  We have found that, with diffrent figure and base sizes, the number of bases per unit is less important than the frontage falling into a common width (for us between 21 and 26 cm for a standard infantry battalion). For 3 units battalion gun models have been used within this concept.


Although the Imperial side was designated the Attacker the original scenario did not make them very significantly larger so neither did I. I did, however, give the Reikland army two large and superior units. The objectives were intended to give both sides an incentive to attack, but the game got off to a hesitant start with both wargamers using up many of their "quota' of "1s" in the first two moves!

These two photos show the position at the end of Move 1, both gamers were, in my opinion, over influenced by the deployments shown in the book.
This was the point we decided to repair to "The Butcher's Arms" for a well deserved lunch and a pint. (Alison's vegetarian club sandwich made to my recommended ingredients was a-maz-ing! - thank you)


So this was the situation during Move 5:


The situation during Move 7:

At this point Ken had his first stroke of luck. Up to now all dice rolls for casualties among leaders had been negative for both sides but as General D'Ancolie led La Reine forward he was severely injured by a round from a Reikland battery and his place taken by a "Dithering" subordinate. Luckily for Guy Neuvalee was within 15cm so was able to mitigate the ditherer's uncertainty somewhat!

At this stage  (Move 11) it felt, visually, like Guy's French had only a slight upper hand, as, except for cavalry, Ken had been constantly giving ground and losing units. I was keeping a private check on Army Points lost and at this time it was French 2.5 and Imperial 4.5, with two French generals now dithering and no one having any terrain points.


It was now around 6pm and we'd played 12 Moves. Coincidentally that was the amount I had written in my notebook at the start as an aim and it coincided with the time my visitors had to go.  The following two photos give a general view at the end (with the exception of the Canitz battalion which Ken had taken out of line to have a play with frontages compared to his own figures!)  To be honest it was a bit scrappy for both sides. Army Points lost were now - French 3.5 and Imperial 4.5, and neither had anything for terrain since the French were in possession of their hills and road at the start and no longer had Kutzdorf.  Ken claimed that if we had played one more move he could have evened up the points, and no one disputed that so both "Military Gentlemen of the 18th century" called it an honourable draw. 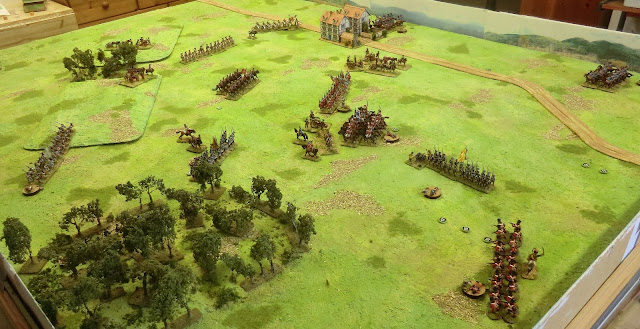 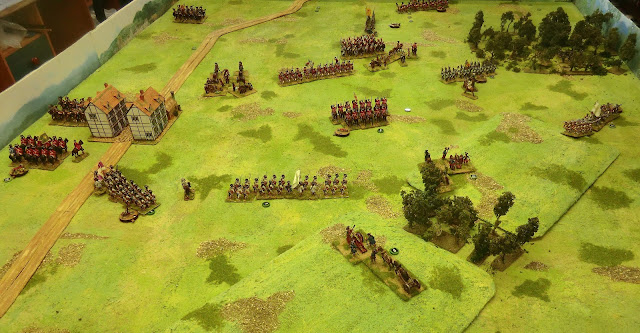 Some more thoughts on "Honours of War"
As a balanced wargame this scenario is a bit strange but as a rules learning game for us all it was great. The deployment used by both sides gave plenty of room for manoeuvre and that's just what they did all day. The command structure rules kept discipline most of the time and each commander had some tough decisions about how to keep the action going with diverse brigades on a wide front. To me it felt like an 18th century battle should, and with two 18th century enthusiasts in charge we had no silly situations or gamesmanship to worry about, they were both in learning mode but both very astute wargamers. Overall a huge plus and I'm loving the games played so far with HoW.

This scenario introduced Light Infantry and past experience in other rules had made me very wary so I gave the French one as well as the two Imperial battalions of the original scenario. However, I was pleasantly surprised that, as long as you make them "inferior" they are far from the super units that reading the rules makes them appear. They cannot easily take on line units, and I'm happy with the balance.

On the down side I'm having a few issues. I don't like that any unit with 5 hits is automatically out of the game; I'd prefer to see some dice chance and/or rallying by a general and then a longer recovery time. Even the "large" and "superior" Erbprinz Grenadiers could not withstand a volley added to a canister salvo. Ken had no chance to withdraw them at 3 hits as the rules suggest. A bit like Black Powder I think these rules are best for really big games where you can afford to lose units quickly as long as you can back them up with successive waves. In this medium sized engagement poor Ken had really run out of winning options once his infantry attack failed.  Guy thought that in reality his army would have stayed on the defensive after that, holding the high ground, but he wanted to make a game of it by counter attacking. That went on to prove what we have seen in other HoW games that he who can stay stationary to shoot before a melee usually comes out on top. That may need fixing somehow as there is little incentive for infantry to attack with cold steel - maybe that is deliberate and it's our tactics at fault? (Think of the French at Quebec!).

I'm not happy that wounded or killed leaders are replaced immediately always with some lower capability replacement. I'd prefer, say, a D/Average number of turns at lower level then dice for the quality of a replacement from the C-in-C's staff pool.

Grazing fire makes it very detrimental to arrange your battle array as historically realistic successive lines. We reduced the effectiveness against third lines but I think we need to do that for second lines too.

Sorry to winge, I love you really HoW!  Any readers thoughts welcome and apologies if these issues have been dealt with on the HoW Forum but I've never made time to peruse it.

Thanks to Ken and Guy for making the journey and giving up a working day to keep this old pensioner entertained!  I really enjoyed it, and this is what wargaming is about to me - a leisurely day playing a historically serious game but in an Imagi-nations context allowing the occasional moment of hilarity. HoW has a basic structure on which layers of imagination can be applied, or pure history if you wish.