Now I'm more or less established in my new wargames room it was high time we got on with another test game for the rules to be used for our 1:3 scale efforts in the areas of La Haye Sainte and Hougoumont. As you will have seen before we are just aiming to produce a generic battlefield which will test the type of units and capabilities we will need in the real games to take place this July and September.

First let's look at the table
The plan for my room is that the space is for flexible use, including figure painting, tabletop model making and 2D oil painting. So the tables are all foldable and give me various configurations. The test game set up is completely removable but, subject to Paul finding the space suitable for his "whole battle" refight, the boards will form the core of  all four weekend Waterloo games. So I was keen to have a test of the space and size as well as the rules.

Here is an idea of the table layout with boards, this is 12 feet x 6 feet 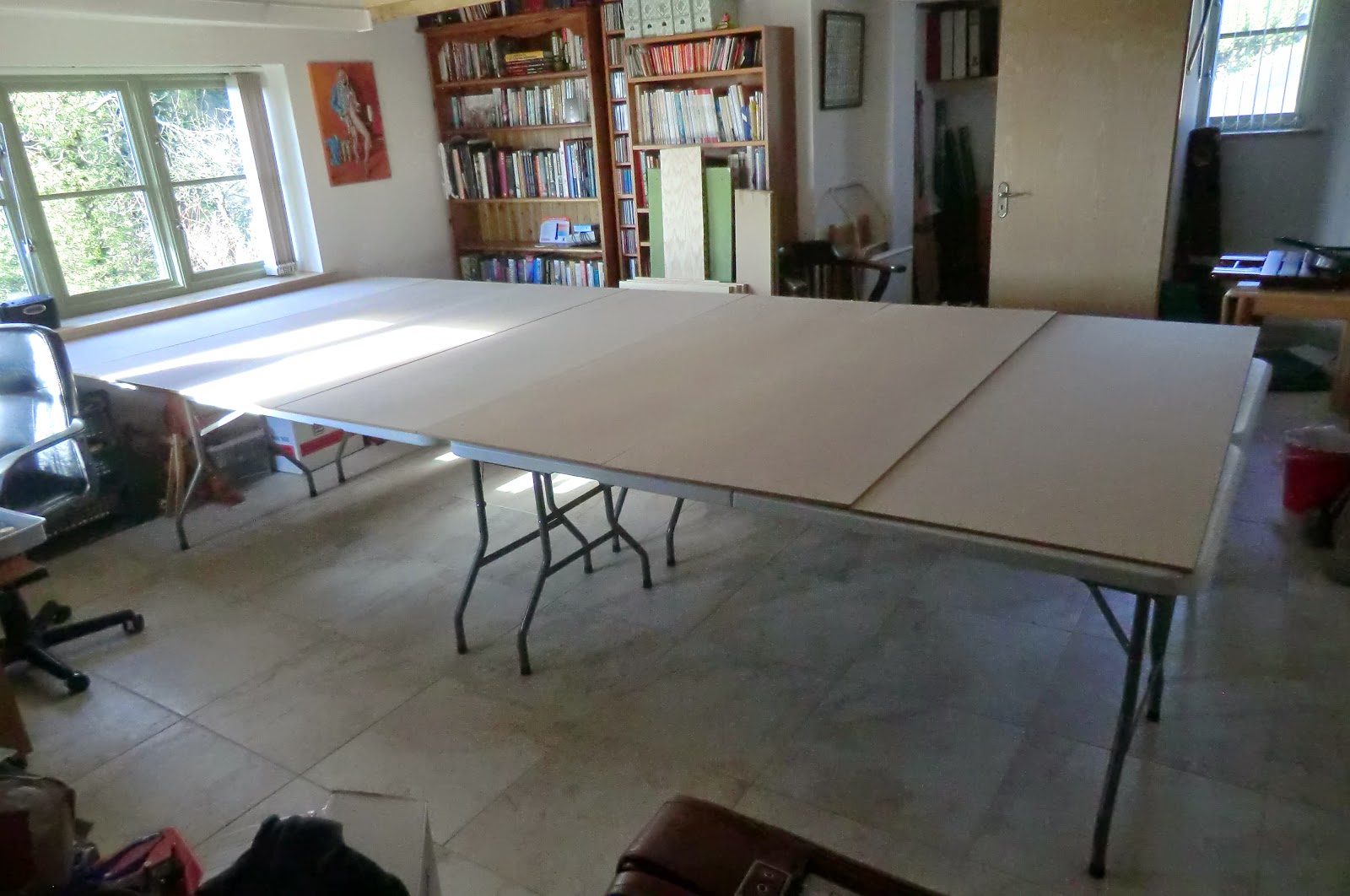 Then with an add-on to make use of the way the room widens out. This is another 5 feet by 2 feet. But we still have to ensure we can get round to maintain the functionality. 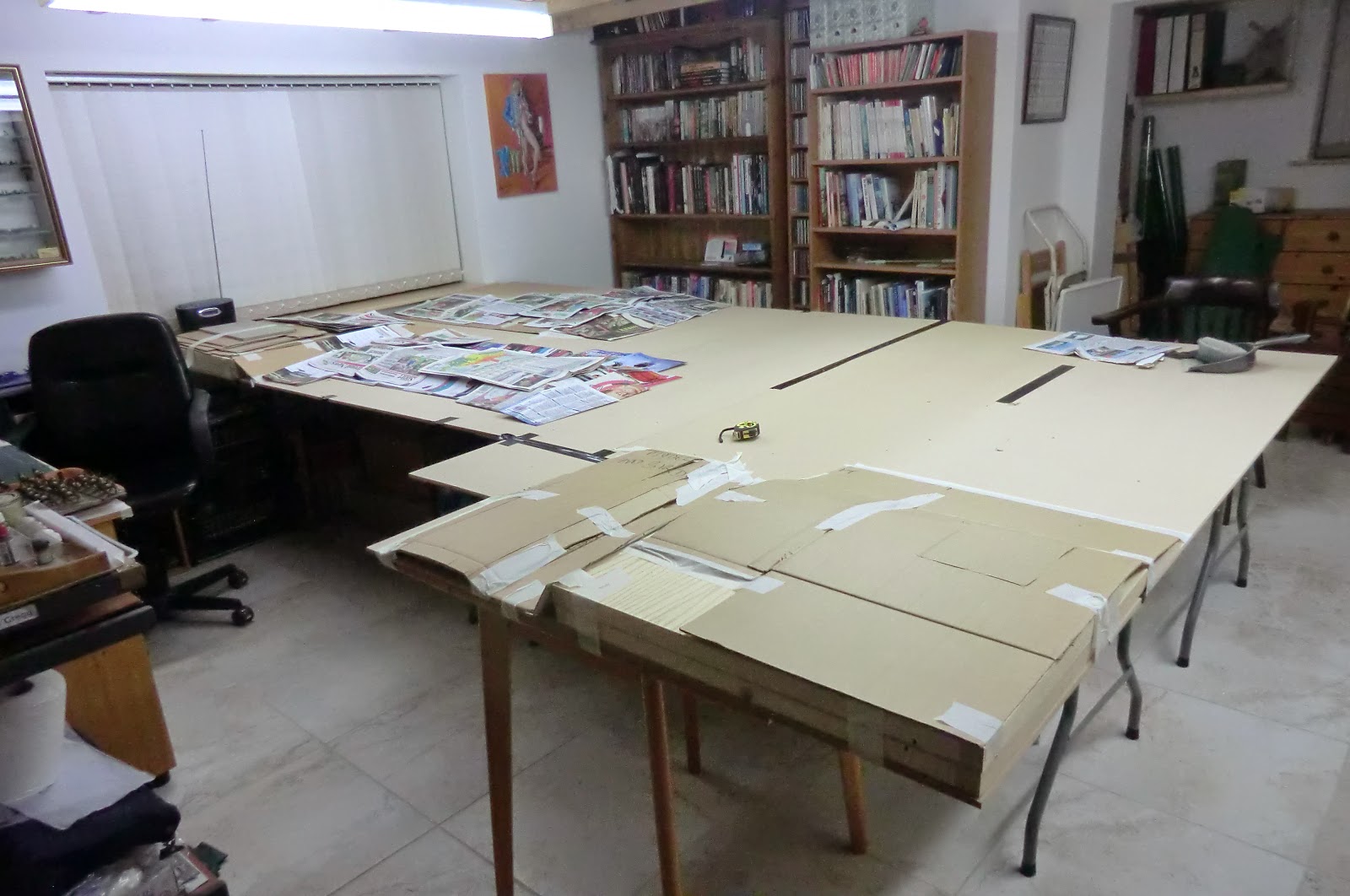 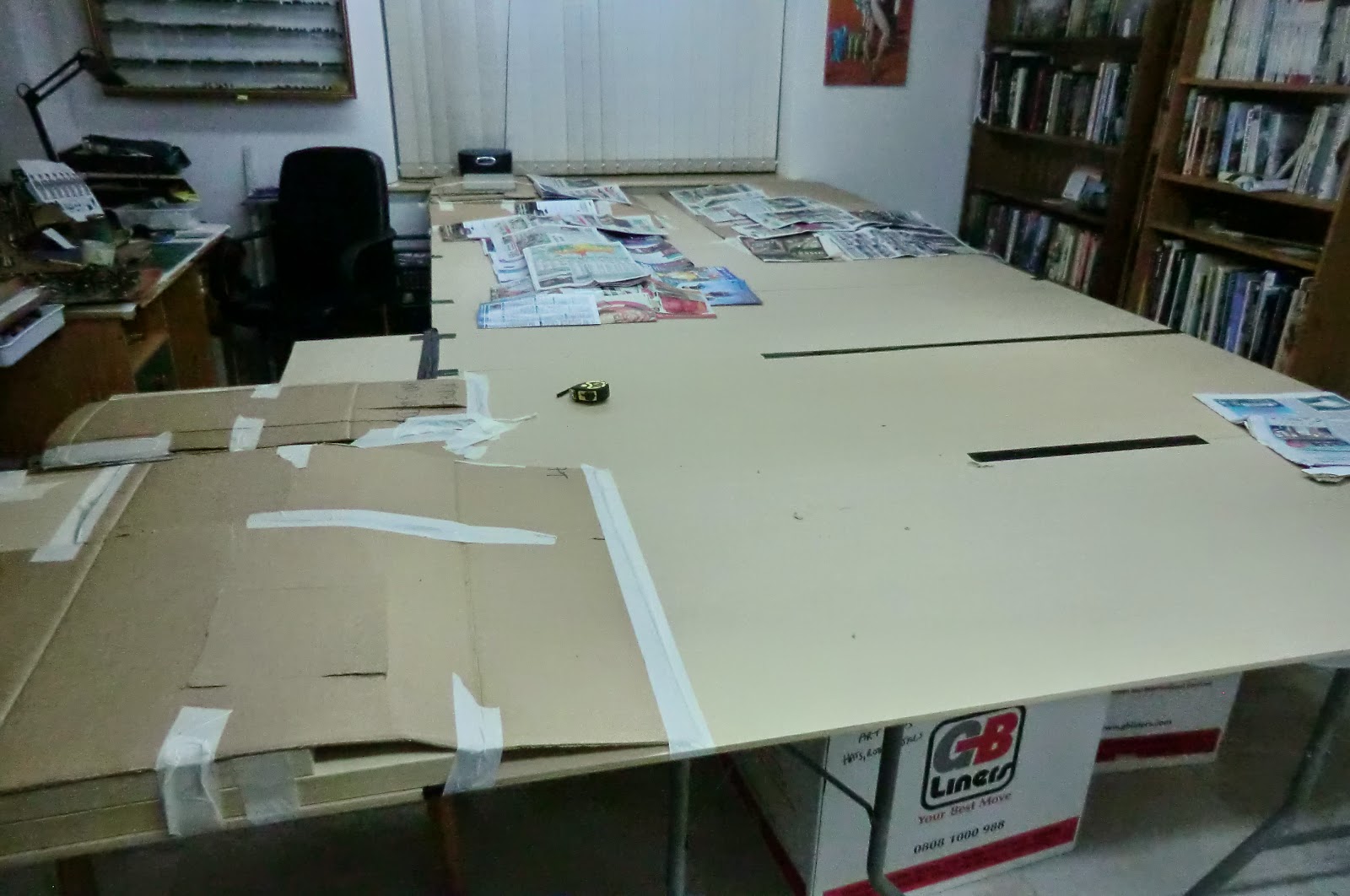 You can see I have started to place some high ground. This is spare wooden boards covered with shaped cardboard and taped and then smoothed with magazines and newspapers.
Once I was happy with that I covered the whole lot with layers of plain paper left over from our recent unpacking. This helps the smoothness which at this scale is pretty important as the terrain is mostly "what you see is what you get" and not really representational like most non-skirmish level wargames. 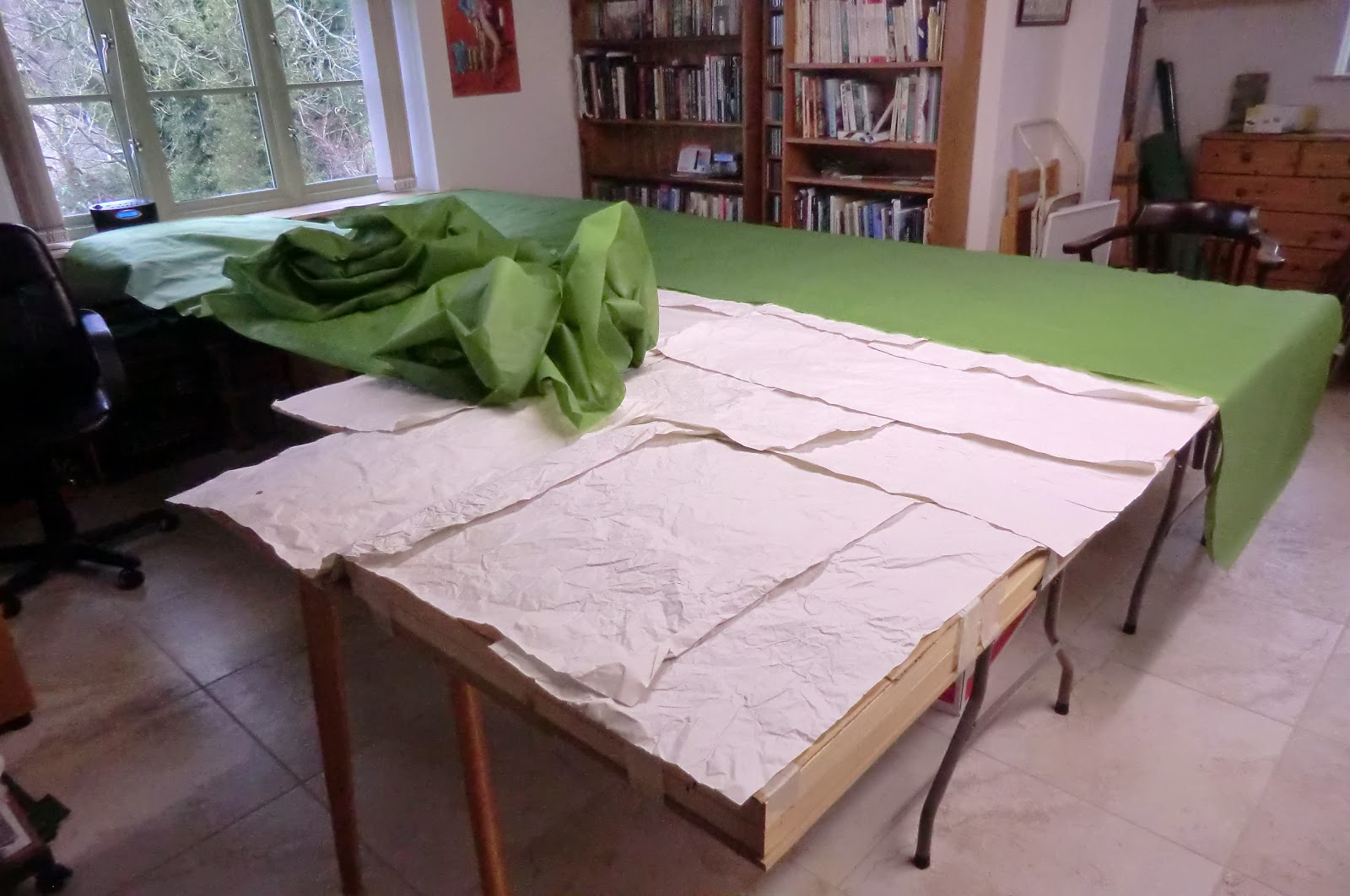 Finally it is covered with fabric. I've used a garden product by Gardman "Grow it" Heavy Duty Thick Fleece in rolls of 10 metres x 1m. One roll was plenty to do the table once but it is not "thick" for my purpose so I had to get three rolls and lay them on top of one another to give a richness of colour that was sufficient. It's only about £6 a roll so doesn't break the bank and, unlike a bespoke terrain mat at greater expense, I think this will prove more versatile into the future.  I hasten to add that the real games will have a much more custom designed and modelled terrain, but I've not decided yet precisely what as they will all be very different.

Who are we?
Now ranging between Bristol, the Cotswolds and Cheltenham, Gloucestershire, we have 6 wargamers who are putting resources into this project. Four of us, me, Mike, Richard and Paul, have been gaming together for decades, mostly in Cheltenham, then Kevin came back into our lives after 35 years, full of Waterloo fervour. He was the catalyst for the project and in the search for cheap figures we found James of Fergscalemodelsuk in Aylesbury, who not only proved a useful source for plastic figures, but practically blagged his way into participating too (see James' blog here napoleonicwargamesblog). Mike and Paul have yet to try out the rules so I've organised two days of gaming to fit their schedules.  I'll be umpiring Mike and Kevin who will kick it off next week and then a couple of weeks later the others will join Kev while Mike is away. These two days, with the first leading into the second, will simulate what we want to do over a weekend for the real games but with more figures and players. 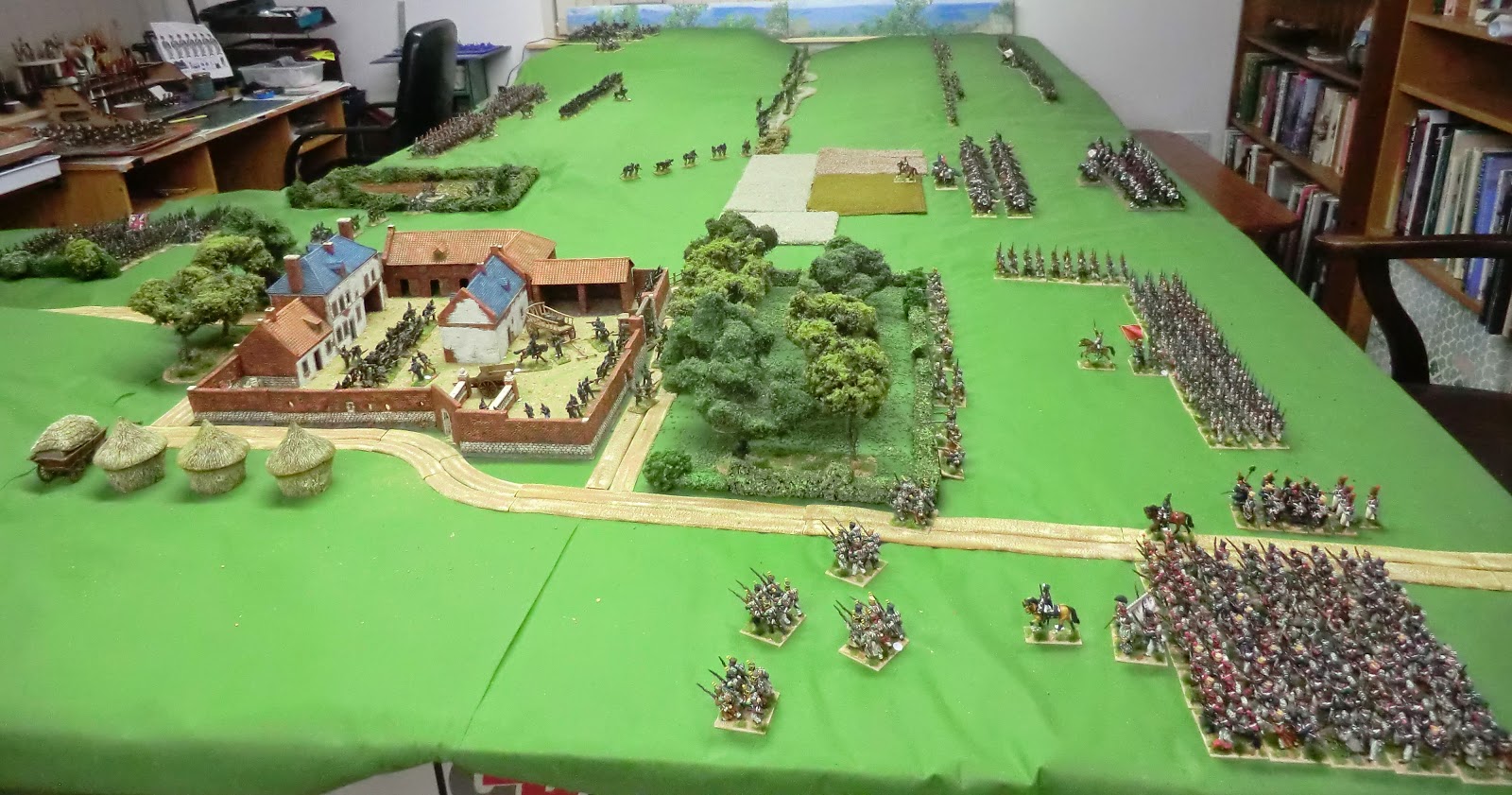 But what about the game?.....
Above is a general view of the terrain I've chosen and the starting positions of the first day's troops (just for Colin the photos are before the arrival of the Wargamer Aide de Camp statistic trays! :-)). It's about 1100 figures and it's worth remembering that the ground scale is 1 inch represents 3 metres, so musket range is 36 inches and effective rifle range goes up to 72 inches. Consequently I make some allowance in the starting strengths to allow for casualty infliction and morale effects as units approach.  What you see on the right is a French brigade of 3 infantry battalions with a small company of line engineers/sapeurs, and two squadrons of cuirassiers. A squadron of line lancers is just off the table. Further back there is a battery of horse artillery 30 inches off table, and a battery of heavy foot artillery about 90 inches off table. We actually have the models set up on shelves representing high ground! (Though they were not in position when these photos were taken) 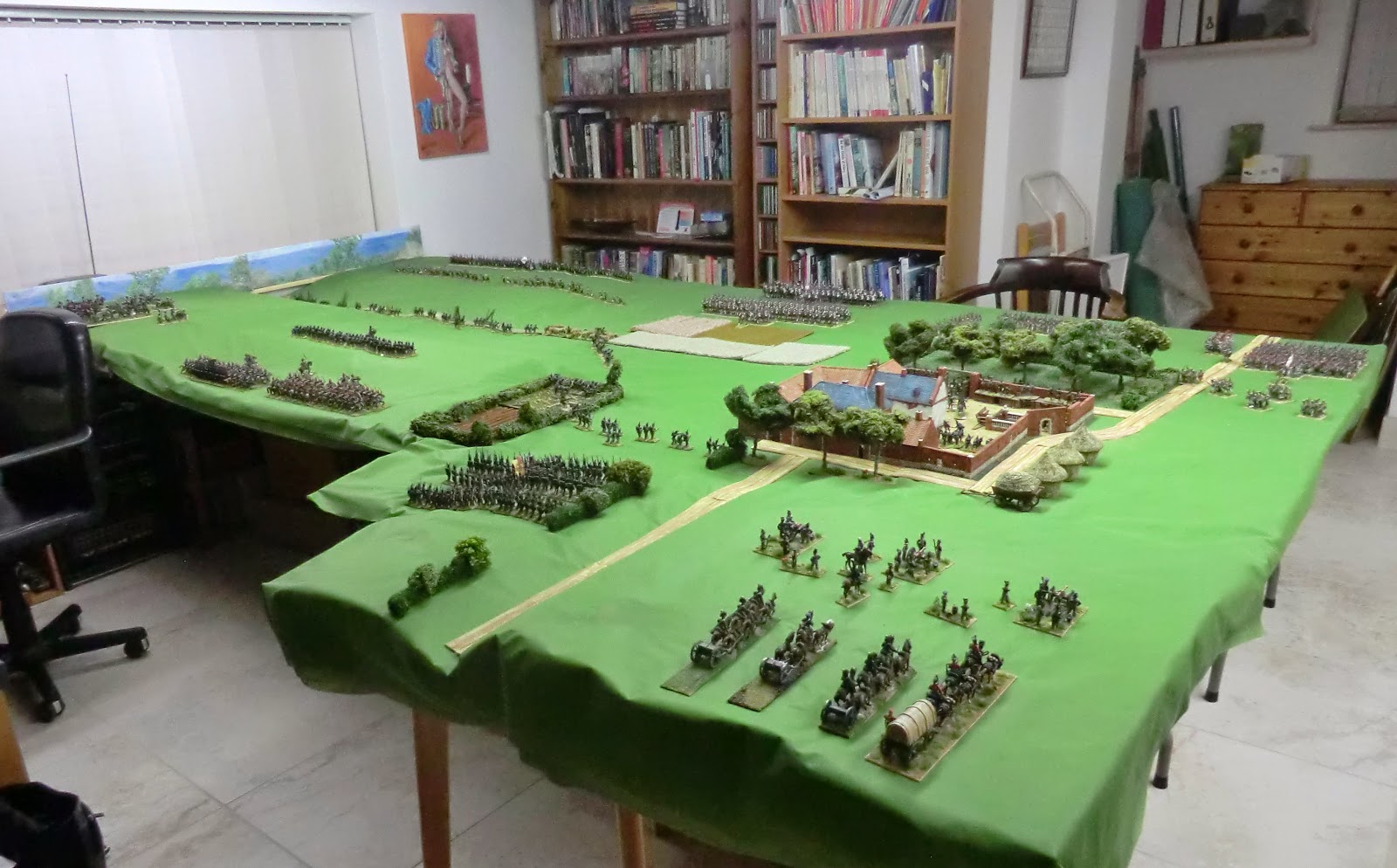 The Allied front line is represented by three companies of 95th Rifles in the orchard and farm,and the 2nd Light Battalion King's German Legion skirmishing along the valley and with a supporting wing on the ridge above. The centre is supported by the Hanoverian Luneburg Battalion with a quarter of its strength rifle armed and skirmishing. In the rear of 2LB KGL are two squadrons of KGL Hussars. The left flank is guarded by a battery of Royal Horse Artillery and the right by a battery of Royal Foot Artillery. Now some more detailed views with captions 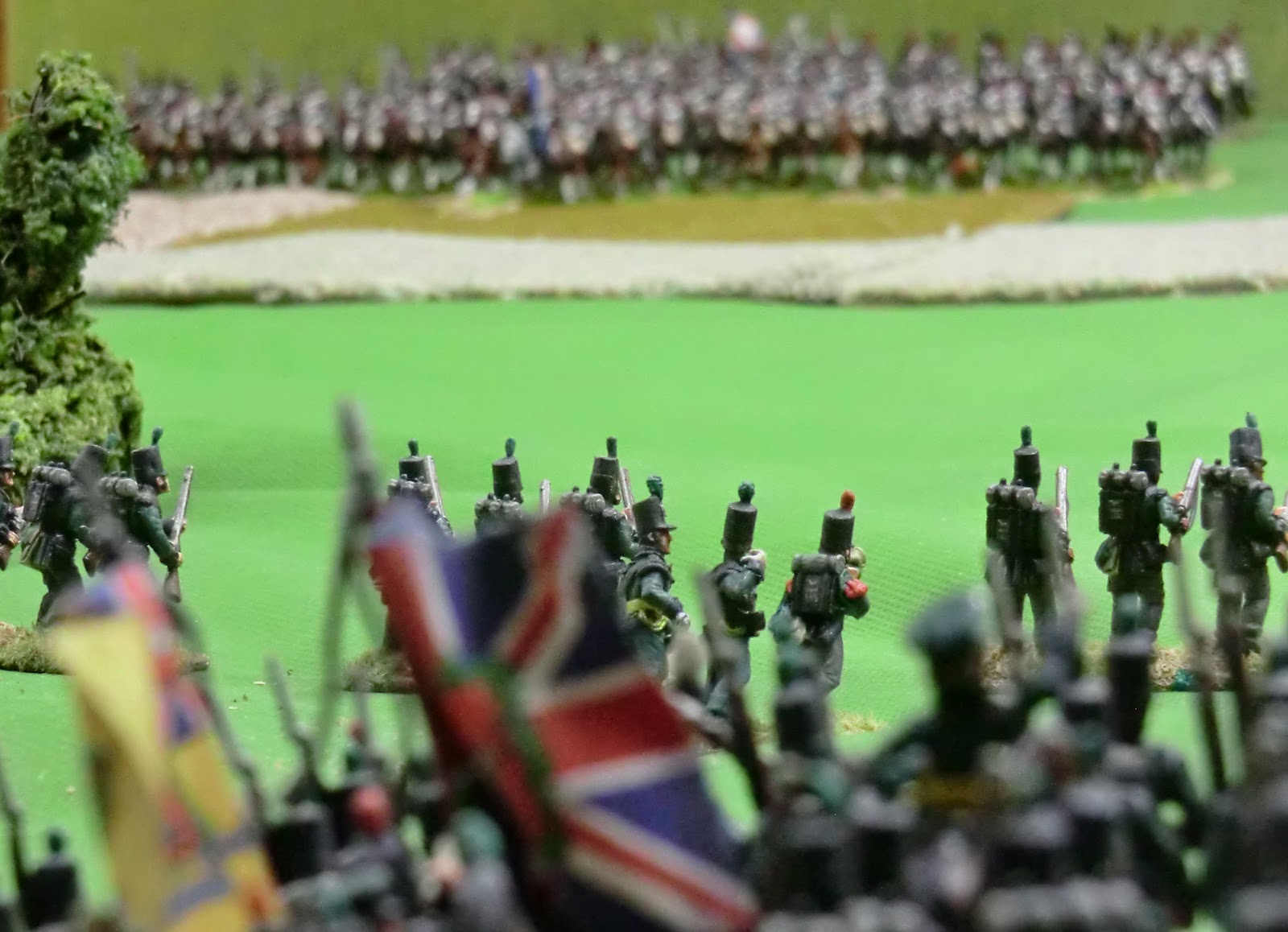 Well the stage is set. My intention is to bring you many more photos after our first day's play. Later, when the second day arrives, these forces will get reinforcements of about 60% more each.

(PS. In case anyone is wondering that is a large canvas print of  "Natalie" on the back wall. The original was much smaller and as far as I know her owner is still allowed to have her on display even though he seems well hooked now!) (See right hand side bar for info on Hussarettes)