Well you did it, and in record time! Six days on from my celebrating over 24,000 page visits and you've made it 25,100 . Thanks to everyone who has supported me since the beginning and to all those who have joined since. Whether you come back regularly or just find my blog by chance I hope you find something here of  use, interest , or to just brighten your day. The posts about the Hussarette paintings are consistently featuring in the top five favourites so I promised you some more after the 25,000 mark, and here is the latest work. 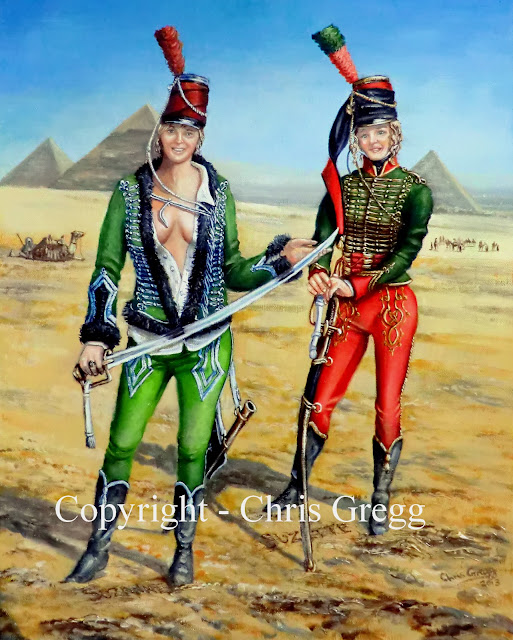 This was commissioned as a companion piece to "The Twins", which for those who can't remember it, is here
This one is called "Hussarettes d'Oriente: Suzanne et Suzette,  of the 22nd Chasseurs a Cheval and the 7th Hussars bis, in Egypt, 1798"

This is their story:

Suzette was born in 1775 and Suzanne in 1777  and, as they grew up, they were inspired by the role models of their twin aunts, Francoise and Francine, who started a trend for ladies of standing to take up military careers and joined the French Legion Etrangere. This admiration was embodied in the "Twins" painting of 1780 that took pride of place in the family Chateau in Gascony, and Suzanne and Suzette later leaned towards military interests themselves.

Then came the Revolution of 1789.  However , although some Royalists fell foul of the guillotine this family was good to their servants and farm workers and were able cleverly to espouse the Revolutionary cause and rise up the new hierarchy. Thus these girls joined the army when they were old enough as young officers. Now aged 23 and 21 respectively they find themselves on Napoleon's Egyptian campaign. They are off duty and doing what tourists in Egypt do. They have hired camels to see the pyramids.  They've brought their swords playfully to scratch their names in the sand and pose as victors, and Suzanne, who is the more audacious,  steals the show while her slightly older, more reserved, sister Suzette looks on, trying to smile sweetly but not quite succeeding.

In the background the bored camel driver awaits their pleasure in the shade of his camel while another tourist party is assembling in the distance.

This is another oil painting on gessoed canvas, size 20 inches x 16 inches, and the technical details of its creation are much the same as in the Twins painting referenced above.  The decisions on uniform details though did initially pose some vexing emails between me and the client.
- Did the 22nd Chasseurs wear fur lined pelisses at this time?....but wouldn't they be too hot in the desert anyway? The client loved my model "Ella" in her pelisse so it had to stay, but we discarded the dolman as both together would  definitely be too hot.

- What colour green was the 22nd's uniform? We settled on  mid green for the pelisse and bright green for the breeches.
- 7th Hussars bis did not seem to be the same regiment in 1798 as the later 7th of Empire fame and uniform guides varied between dark blue, dark green (maybe black?) or a more normal French Imperial green. I argued that, artistically, the mid to dark green shown would compliment the greens of the 22nd as well as maybe relate to the later 7th Hussars more faithfully. 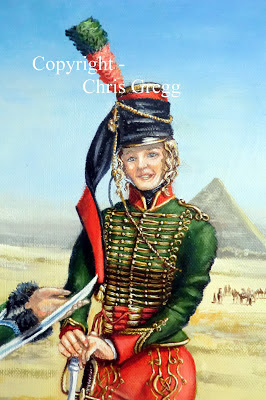 The design of the gold lace on the breeches came from a source dated 1800 but it was just so gorgeous, and challenging to paint, I couldn't resist. Besides, the client had asked for ringlets in her hair and the lace followed that motif wonderfully.

My 1803 style three-bar sabre hilt was too late for this date so I've given them the single bar style of the 18th century. 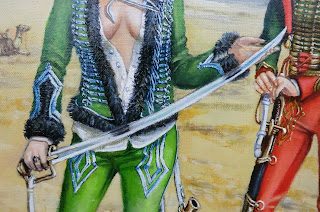 Subsequent research into Egyptian swords led me to discover French sabres "a la Mamelouk" and  I realised that some of the later exotic sabres beloved of rich officers were influenced by the original swords of Napoleon's Arab enemies in Egypt. I've acquired a lovely reproduction version which I intend to feature soon in the possession of a "Chasseurette" of the Imperial Guard.

And, Legatus, if you are reading this, don't worry, that pyramid background is not ripped off from your personal profile picture!

Now my client's idea for these two further French military ladies and our joint venture to connect them in a historical family context got my imagination racing as to where things might lead if Hussarette (or Chasseurette) paintings began to connect in a series. Here's an illustration to get the creative juices flowing. 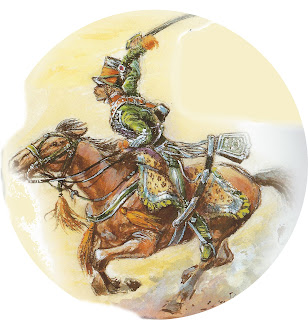 It is a detail from a painting by Jack Girbal showing Lasalle, as a Squadron commander of the 22nd Chasseurs in Egypt about to save General Davout's life by cutting off the hand of a mameluke who is attacking him.  I got to thinking that maybe my audacious Suzanne could became a female Lasalle in my parallel empowered women Napoleonic history - Colonel Suzanne at the head of her Regiment; later General Suzanne leading a fine Brigade, then Division, of Light Cavalry,....;being decorated by the Emperor for ever more daring exploits.........I've had other ideas too, some of which will see our Hussarettes shedding their uniforms, which is how it all started really!  So I'd be interested to hear any views of readers on what they think might make good paintings with female alternatives in the place of our hero regiments and characters. You can comment here or if you wish a more personal discussion please contact me by email  Chris Gregg

And that's also the way to follow up this next point. Anyone fancy commissioning more from my model Ella?. She is coming back to the UK  for a few weeks in July and may be willing to do another photoshoot. Here is a  reminder where can read more about her in a previous post. So email me soon for a chance to customise your painting - Hussarette or any other theme, absolute discretion guaranteed .