Count Gregorius von Grunburg has been doing more than his fair share in the defence of Reikland, as witnessed at the Battle of Futonville (see battle-of-futonville-report.html) where his red coated infantry formed the majority of  Imperial forces present. Grunburg did not have any cavalry there as the Count had not yet had them fully equipped and trained. He is very keen to impress the Elektor of Reikland , not to mention her Highness The Empress, and wanted his cavalry to be "state of the art". As this picture of the Grunburg Dragoons shows, by 1760 standards they really are ahead of their time! 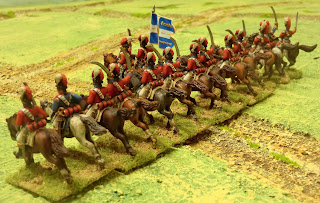 The Count has kept the red coats which are characteristic of all the Grunburg Contingent and specified a rather fetching mid-blue for the facing colour, but the crowning feature is the helmet with fore and aft comb and side plume, a style which would, in later years be popularised by one Banastre Tarleton (Banastre_Tarleton). He has gone for a striking bright red for the main feature of this headdress.
The Regimental Flag is of the standard pattern for Grunburg and some other of Reikland's counties. 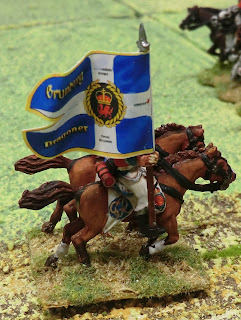 This bears the Imperial dragon at its centre with the regimental facing colour as the background to a white cross, and the name of the regiment in gold lettering. However, the Count is pragmatic and realises that his small army may one day be called up in the service of the Empress' ally, King George II, and so the manoeuvres also include familiarisation of the troopers with an alternative banner following the British pattern.
The official Grunburg uniform orders specify a rather large "GR" cypher on the housings of the horse furniture, ostensibly standing for "Grunburg-Reikland", but rumour has it that the Count has grander designs and it might be anticipating "Gregorius Rex". In any case it will come in handy if the Grunburg contingent has to take its place in the line with British or Hanoverian cavalry.

But the Count dug deep in his coffers after he was persuaded by uniform designers from Vienna that the "next big thing" for cavalry would be Grecian style helmets of an even more majestic style than the full comb variety commissioned for the troopers. So Count Gregorius ordered the creation  of a small Elite company made up  of gentlemen's sons, whose patrons could afford a really gorgeous uniform liberally sprinkled with silver lace. 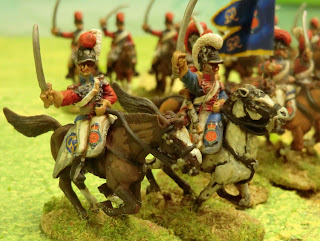 It is expected that Count Gregorius will want to increase his profile by leading this new regiment to join the rest of his contingent in the next battle in the Chambreuse Valley.

Well, back to reality......you've guessed it, all these figures are of the Napoleonic period and 40 or more years later than my 1760s Imagi-nation campaign.  But if Phil Olley can recreate the classic look of  "Charge" using  Waterloo-era Royal Horse Artillery figures (see this for example sittangbad-day-and-other-news) then I think I'm allowed some artistic licence.

The 9 troopers, officer, standard bearer and trumpeter are by Front Rank and were bought at a Bring and Buy a few years ago. Too good value to overlook even though I didn't know at the time what they would become. The Elite Company is made from some superb 28mm figures  of unknown provenance that just happened to be in a box of mixed figures I picked up for a fiver. They were in several pieces with heads and arms as loose parts. I guess they are Wurtemburg Light Dragoons or some such German state around 1805-1815. If anyone can enlighten me please, that would be nice.

My Grunburg flag is based on Henry Hyde's Faltenian one which he generously put on the internet several years ago. I wouldn't use it as a straight copy but mine is heavily modified by completely reworking the background texture, changing his lion to a (Welsh!) dragon, and compiling my own gold lettering. The "British" flag is just done from a scan and redesigned in the computer to suit a generic effect. Whenever the figure is suitable I go for a "hole-in-the-hand" effect, so I can make alternative flags - one for use in Imagi-Nation battles and a somewhat more "authentic" one when the regiment may be called up for service in a historical refight. As re-enactors will be well aware, from a distance it's not so much the uniform but the flag fluttering  overhead that can give the best clue to a unit's allegiance.

I'm quite pleased with the cypher and insignia on the horse furniture. This is all done by some fairly detailed scanning and modifying using my Serif PhotoPlus software. The trouble is you need to get it down really tiny- about 3mm ideally, and when I compile it big enough to work on it's hard for me to accept that I have to make it so small - hence they are over-large - but that suits Gregorius's inflated ego I suppose! I made up an A4 sheet of various colours and sizes (downsized  a bit now) and have added it to my Download sidebar under Miscellaneous. You are welcome to use it for non-commercial purposes; there is also one with French Fleur de Lys, which I used on my Bercheny Hussars (hussars-anyone?). I printed all these onto special transfer paper so they slide easily onto the figure and don't take up much of a profile, however difficult decisions have to be made whether to use transparent or white paper. My transparent transfers did not work at all well on the blue trumpeters so I had to use the backing paper - however, this raises the decals a bit too high. But you be the judge.... 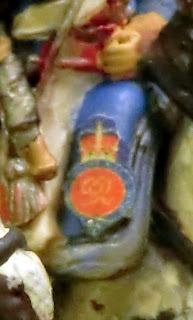 Full details on the decal paper and a video can be seen here.
Inkjet-Water-Slide-Decal-Paper
Please let me know if you found any of this interesting or useful.

Happy New Year to all visitors to this Blog.