Giselle toyed with her golden ringlets as she contemplated the arrival of her Christmas gift from Count Gregorius von Grunburg.

She had been the Count's "companion" since the victory of the Imperial troops, of which the Grunburg Contingent formed a large part, over those of Savoy at the battle of the Chambreuse Valley on 30th May 1760.  Bored of her mundane existence in Chambreuse, and hearing in advance of the Count's reputation for looking after his lady friends, she had put on her most alluring outfit and appeared at his headquarters on the night of the battle. Not surprisingly the Count was delighted to share his looted wine with such charming company.  Shortly afterwards she accompanied him to Grunburg and so captivated the Count that she acquired an apartment in Grunburg Castle.

It was not long before the Count realised that this narcisistic poseuse would provide entertainment for him by modelling the prototypes of uniforms for the growing Grunburg army. In was now December and she was currently enjoying the soft white fur of the pelisse and the snug fit of the breeches that the Count had in mind for his first Hussar Regiment. She liked the way the silver lace caught the light and the red woollen material reflected in her lips. The hat was a bit odd but Greggy had told her it was based on fur hats of the original Hungarian Hussars of some 50 years earlier.... hers not to reason why........hers but to model and try.

Now that sounds like her footman coming up the passage.......What will her gift be this time? The layered necklace and the silver heart sword belt buckle were nice but maybe, for Christmas, a lavish ball gown to go to the New Year Ball? 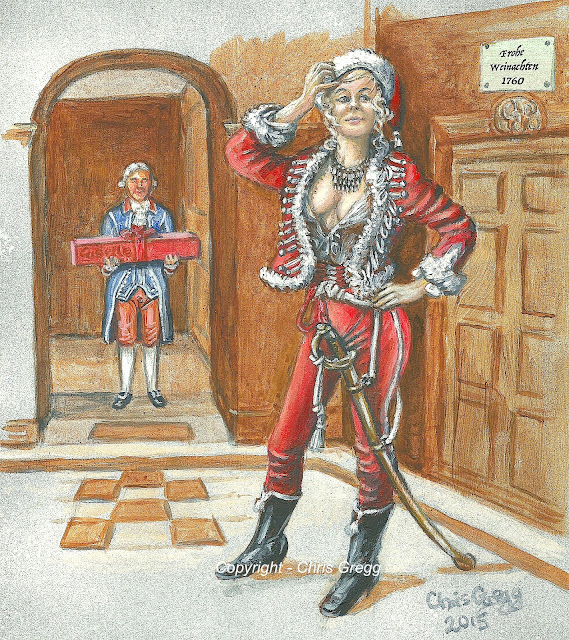 After a considerable time without painting any Hussarettes I was keen to find an excuse and this Christmas seemed like a good time to take up the cause again.  Looking at my archives for inspiration I came across the lovely Ukrainian, Ella, looking suitably enigmatic during our photo shoot at the end of 2012. 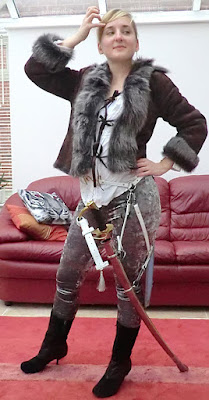 You can learn more about Ella from my blog posting at that time  new-model.

I found a piece of 2mm board approximately 8 x 9.5 inches which I had prepared some time ago with a soft grey ground which would take acrylics in a gouache type of treatment. For those interested in the way I go about creating a painting in this sort of technique here are some of the highlight stages in the process.

I squared up a copy of the original photo so I could transfer in the correct proportions to my painting surface.

Now I could consider how to put the young lady into a suitable context for what was to become one of my 2015 Christmas cards, as if the red and white fur trimmed uniform hadn't given the game away by now!  The internet came in useful and it didn't take too long to find a suitable interior for Giselle's apartment in Grunburg Castle with the archway I required for the context. I was also delighted to find a choice of re-enactor footmen with livery of complimentary hues and a useful pose.

This was then rendered into my painting, suitably adapted and simplified.

To finish off here is a close up of the casual flicking of hair off the brow....... 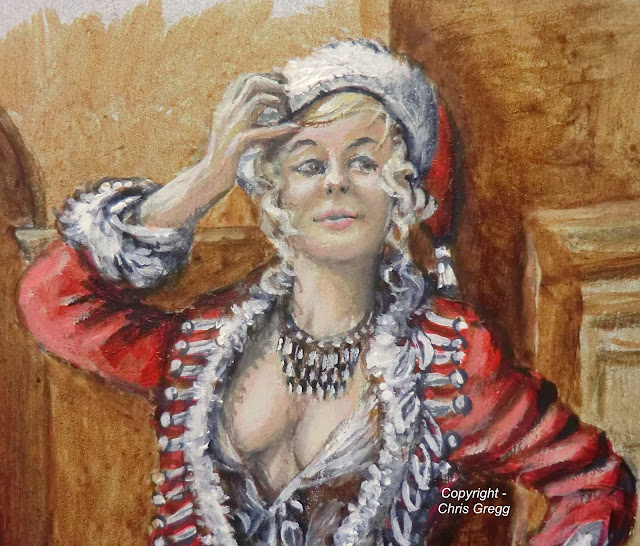 ....and assurance that no footmen, females or white furry felines were harmed or exploited in the making of this painting.

Some of my readers might have received Giselle as a Christmas card, if so I hope you have enjoyed my slightly tongue in cheek seasonal gesture. If you didn't then here it is for your pleasure.  Either way the original of "The Count's Christmas Treat; Giselle of the 1st Grunburg Hussars 1760" is for sale, unframed,  at just £50 plus postage.
Please email me  Chris Gregg if you are interested, or if you wish to discuss any other type of military painting commission as I will be well back into the 2 dimensional art world in 2016 after the distractions of moving house and the Waterloos.

For those awaiting part 4 of the La Haye Sainte game, thanks for your patience it won't be long now.