Trying to make up a little for the dearth of blog posts by me this year, and in particular the last couple of months, here are not one, but two, young Christmas ladies in uniform for my readers! 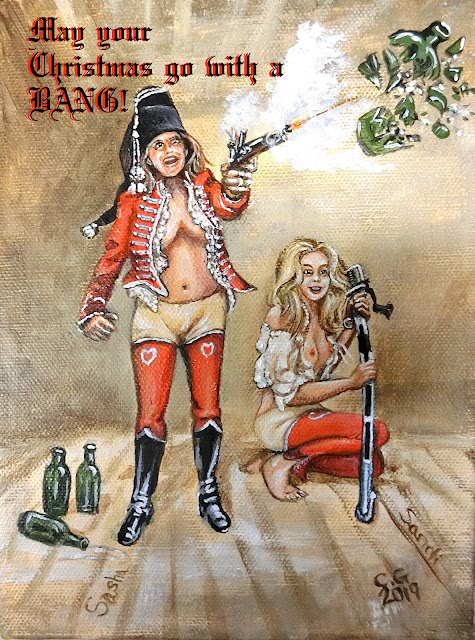 This year Sir Joshua Gregg RA has recalled his memories of his grand tour in Silesia in late 1757. A sojourn just before Christmas among the ladies of the Prussian 7th (Seydlitz) Hussars brought some surprises in the degree of high spirits expressed by some young trooperettes.  Fresh from Prussian victories at Rossbach and Leuthen, Winter quarters were proving rather boring for these light troops known for their exploits of man-izing, hard drinking and gambling. Someone dragged in a crate of schnapps looted during the Austrian retreat from the snowy blood soaked churchyard at Leuthen, and before long a shooting contest was taking place! A good fire and the powerful liquor encouraged Sasha and Sandi to loosen their dolmans to reveal their fetching filigree decorated blouses, so that Sir Josh too began to feel hot under the collar!   But nothing stopped him getting out his sketchbook to record an interesting scene and later interpreting it as a studio painting.


Many of my wargaming buddies and art clients will have received Sasha and Sandi (Hussarettes Nrs 27 and 28 in the series) as my Christmas card 2019 and so now here it is to all my blog readers. Wishing you all a Happy Christmas and a Merry New Year and grateful thanks for all the great comments and support I have had in the year gone by. Apologies for the lack of blog entries but I have been busy with painting commissions, major computer problems, and a very absorbing project involving classic 1970s Napoleonic figures - more of that anon. I will be carrying on with my reports on the Raid on Vestisle SYW mini-campaign and also hope to bring you a report of another historical Seven Years War wargame.

Back to Sasha and Sandi - this is a small acrylic painting 8 inches x 6 inches on deep edge box canvas (without the words), ready for hanging and is for sale for £45 plus postage. Please email me if you are interested and/or need more photos to help you decide.

COMPLIMENTS OF THE SEASON TO ALL WHO STOP BY THIS PAGE

Posted by Chris Gregg at 00:54 4 comments: Links to this post

So I could see that both players were determined there would be a showdown pretty soon and I asked them to share with me their intentions:

Guy for the French:
In summary this was a very brave attempt for a long single line to confront the Allies at all points and hold them back. This was to give as much deployment room as possible for the reinforcements which were expected to land at Abrantes harbour and Beach 1 in late afternoon. 80% of what passed for the illusion of Guy's second line were in fact dummy units using buildings, woods and hillslopes for concealment.
As a reminder you can find the French order of battle here

Ken for the Allies
To some extent Ken's job was more straightforward though, on the ground, it would not have seemed so.


In essence Ken had described his plan as the left flank to be the "Hammer" to drive the French onto the right flank "Anvil".  How lucky was I to be the Games Master for two such determined and clever 18th century wargamers!

Knowing these plans helped me to gel their orders with any conflicts that occurred on the map movement and decide on appropriate formations and spread of the various units and brigades. Both chaps had kindly got their figures to me before the designated weekend so about a week before hand I was able to get everything sorted and ready. Also around this time (1100 on 10th August campaign time) I got both commanders to write written orders/instructions/suggestions as appropriate to their colleague players who would command the second wave troops. These were despatched by courier and then fast boats to the approaching fleets. I got Graham Cummings - the French Duc de Richelieu - to specify the intended points of disembarkation and timing for the French "main force", and Dillon Browne to do the same as Granby commanding a mainly Hessian corps as the Allied reserve.
Thus, before the action of Bellune Hill was started on the table, the dice had been cast, so to speak for the reserves, and Ken and Guy had to play without the certainty that things would pan out as they hoped. 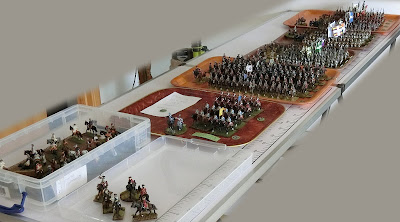 The Battle of Bellune Hill - opening dispositions
So the following map shows the dispositions on or around the tabletop at midday 10th August 1756 just before we started the wargame action(s). Each square on the map is two feet (60cm on the table, representing about 500 metres). Each unit number corresponds to the Orbats already referenced above. 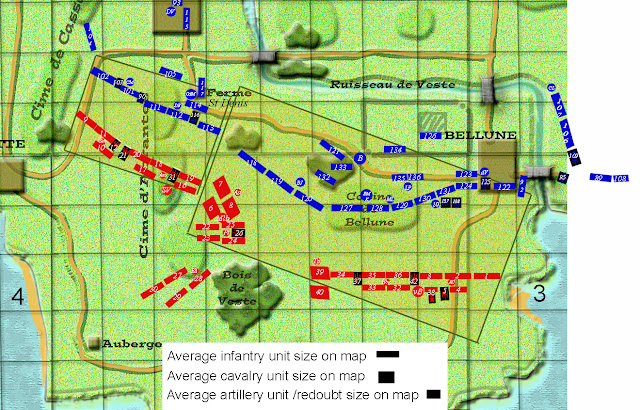 You will note two distinct rectangles. This is because I had secured the Duchess' agreement that for this weekend only we could set up playing as well as storage space in the open plan living area above my wargames room. So the large rectangle is the main table fully stretched to its 12 feet x 6 feet and the small one a table cobbled together to make about 5 feet x 4 feet. Although not very photogenic the small table allowed concurrent play and we were able to treat the games as one big battle on a realistic scale 4500 metre frontage.

I got Ken and Guy to travel on the Friday so we could make some sort of start that evening. I decided we would kick off just with the small table and leave the big one until all five players arrived on the Saturday. Poor Ken had to deal with deadlines on his engineering project which is about infrastructure to do with a scheme of national importance, so even wargaming could not trump that! He had given me permission to command his Allied troops till he arrived, so I took things carefully.

Happily the deployments meant that the small table had neatly balanced forces for a self contained game.  The first photo shows that I had to add an extra board and mark some hatched tape to show the slope of Cime de Cassatte in the foreground. A small back table allowed us to track the progress of the Bentheim Regiment emerging from Abrantes town.

Tiredness had set in for the players so we called it a night and resumed in the morning before the others arrived.


Campaign time was now 1.40pm and we had done 5 Moves on this small table. What had started off looking bad for the French had been turned around as Ken had to attack and unfortunately did it in such a way that he got far too much incoming fire, with inevitable results. It was a good place to leave this fight as the others were beginning to arrive so it was time for coffee and biscuits and briefings for the newcomers.

A tour round the Bellune Hill battlefield
The following photos show the starting dispositions on the big table, to where our action now shifted. 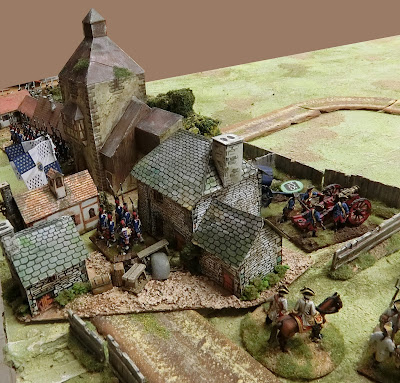 I will let the photos tell the narrative. This part of the battle too commenced at 1200 midday. 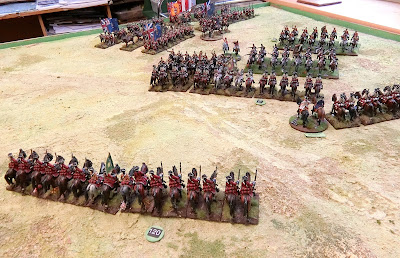 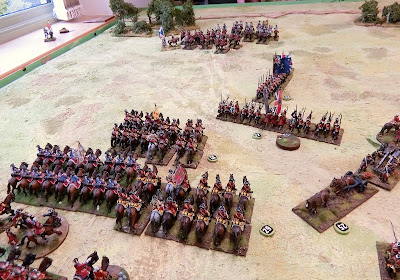 The Advance to Bellune Hill 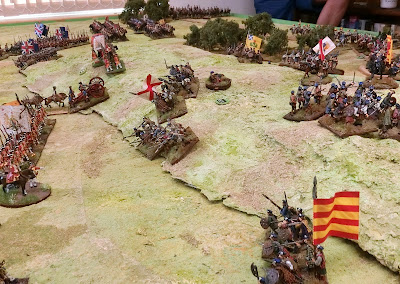 Around this time we had done 5 Moves and we had to decide if the smaller action on the table upstairs should be resumed.  Guy's infantry had the upper hand and he was fantasising about sweeping forward and then coming round onto the big table South of the woods to cause trouble on Ken's flank.  There seemed to be a unanimous view that it was an unrealistic aim due to the British troops being unbroken and both sides on that table were still fairly evenly matched. So we just assumed a standoff on the Cime d'Abrantes.

It was now around 5.30 pm real time and 1420 game time.  The players were happy to call a halt there as there was much more to be done in this mini-campaign weekend.

There was honour for both sides in this battle:

From my point of view it had been a great game to watch, and I loved the terrain with its wide sweeping plain but just enough key obstacles which dictated the French deployment and gave something significant to fight for.  Just what you want in a campaign game - not a fight to the death but careful deployment and nice blend of audacity with cautiousness in tabletop decisions. Its fair to say that the Allies were dogged by a couple of runs of unfortunate dice without which their plan would have looked more efficient and speedy than it was. Once again "Honours of War"(HoW) had coped well with a large multi-player game - about 1000 figures in play and 7 turns completed in about 5 hours of actual playing time (not counting refreshment breaks and briefings!). Von Trump's poor initiative dice felt more like "Black Powder" but that prolonged torpor doesn't happen at all often with HoW.

Next time: How we organised the aftermath:  post battle attrition, arrival of the reinforcements, redesigning the battlefield, and redeployment for the Sunday's big Battle of Abrantes.