The action begins
Moving comes before firing but it's fun to start off with a note on the good humoured banter that crossed the table all weekend. When it came for the French Grand battery to open fire one of the players looked at his watch and mimicked Christopher Plummer's Wellington in "Waterloo":  "The first shot is at 11.13, sir". We all saw the symbolism that our game had "started" so close to the real battle's 11.25 and burst out laughing. It set a good tone for the proceedings.

Reille's Corps began its move to the left under Pat, but Peter, as Ney, having no troops of his own, took about half the Corps forward and began to converge on the Great Orchard area of Hougoumont . He ran into heavy fire from sharpshooters in the orchard and woods as well as on the slopes of MSJ, and considerable British artillery fire from the crest. The Grand Battery caused only 1 hit for its first salvo with no morale effect on Byjlandt's brigade. On the flanks both the Light Cavalry Divisions of Pire and Jacquinot advanced but Milhaud's Cuirassiers failed to activate so D'Erlon just marked time by changing formation. Evidently the French had decided not to make the mistake of an attack without close cavalry support.
The Allies contented themselves with moving Hill, supported by Grant's cavalry, out to towards the right flank, the Guards moved to reinforce Hougoumont in full strength, and Vivian's Cavalry Division moved out to the left flank.
Midday to 1 pm
Pire's Lancers had met Grant's cavalry and come off badly and were pushed back. As a  consequence Jerome's planned left hook ground to a halt as his brigades formed squares due to the Allied cavalry being true to form, failing to pull back after victory, and coursing off after the French "hares". Behind them though Kellerman's Heavy Cavalry had activated and moved left towards Mon Plaisir in support of Jerome. The Hussars of Grant's Division annihilated the fleeing French cavalry but two of his brigades were broken themselves on the squares of Jerome's Division. 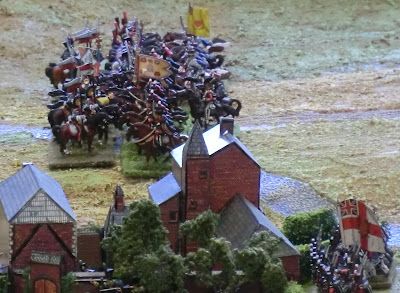 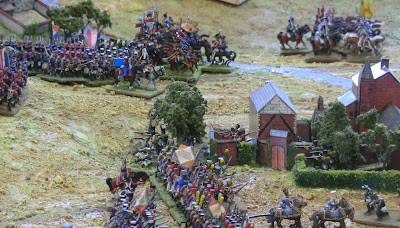 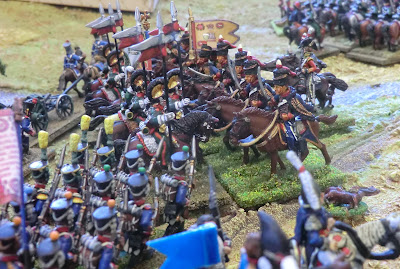 Further back Lord Hill reorganised his British infantry into menacing looking columns, was the Allied right hook plan about to be executed? 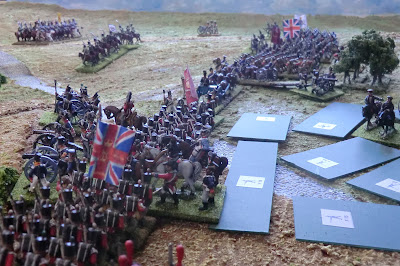 Foy's Division led by Ney in person had fared badly under the Allied guns and retreated in disorder from Hougoumont,  hotly pursued at a distance by British Rifles. A surprise occurred when Tony sallied a half battalion of Nassau infantry forth from the Hougoumont woods and proved to be the "straw that broke the camel's back" for one of Foy's brigades, adding another Victory Point to the Allied score and rendering the Division of little use from now on.

On Mont St Jean Byjlandt suffered 5 hits this time from the French guns at long range and although their Morale did not break they were at "tired" status and withdrawal behind the crest made good sense. Alten's Division gave up its front line position to move towards the right flank and was replaced at the crest by reserve units.

Around Papelotte/La Haie, Tony as the Prince of Orange moved a Netherlands Division down the ridge to support the Nassau skirmishers in the hamlets. The latter had been playing cat and mouse with Jacquinot's cavalry to little effect for either side. Owain began to break the deadlock by moving Vivian's Light cavalry around Smohain and Frischermont to give Jacquinot pause for thought.
1 pm - 2 pm
Up to this time Ney had been sending messages to Napoleon, in between losing Foy's Division and trying to persuade Kellerman to get a move on. Paul had rendered Napoleon as "resting" due to his illness and lacklustre performance that day. He could self activate by a 1 on a D6 aided by messages from Ney (i.e. each one took a Rank/command from Ney). None of them had made any difference until now when Ney left the field and visited Bonaparte in person to encourage him to became his old self! He got up and Kevin was pleased to be able to activate Lobau's Corps, the Young Guard and the Guard Cavalry. Since no commander was on the field of battle not much else of note happened for 30 minutes except for the Highland Brigade suffering 3 hits from the Grand Battery. Picton was still very much alive encouraging them to hold. 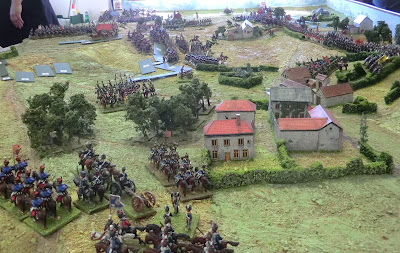 On the British left Vivian's cavalry mounted the ridge in front of Frischermont and began to shape up to Jacquinot between the woods. Behind them Lefevre-Desnouettes Guard Light Cavalry were now streaming to support their right flank comrades.

Things were really happening for the French now. Lobau began to move his whole corps towards Hougoumont filling the space vacated by Foy.  Kellerman's cavalry moved forward on the left causing Hill's potential attack to halt as Mike decided to form the whole Division in squares, backed by Collaert's Belgian cavalry. Alten formed line by his side back up towards MSJ while the British Guards Division began to pack as many bases as possible into Hougoumont and its surroundings. 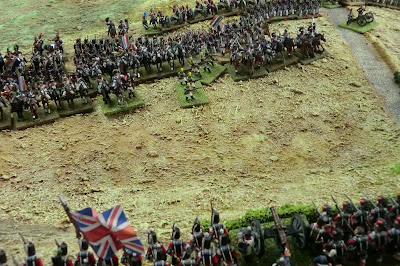 2pm - 3pm
The wooded area in front of Frischermont now saw a big cavalry battle. First of all Vivian was reasonably successful against Jacquinot but before they could make any headway the Guard Light Cavalry came forward along the ridge and delivered a big punch. Amazingly the melee dice proved to be smiling on the Allied cavalry resulting in the KGL Light Dragoons holding the French to a draw - difference of 1.
(3 + 5 = 8 French;  9 + 0 = 9 KGL)
After that it took quite a while for the Guard cavalry to make any headway, especially as when one Allied brigade got "exhausted" status Richard swooped in as Wellington to play an event card that made them mad and go fanatical. This meant they got 4 more fatigue points and fought on till destroyed. 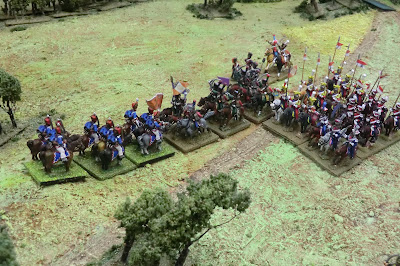 Around this time Hougoumont was set on fire by French howitzer fire (an event card) and a process started where the occupants of burning areas lost fatigue points while trying to put out fires, sometimes successful and sometimes the card got repeated, just adding to their problems as the fire spread. Hougoumont burned for the rest of our game. The British Guards could stand the fatigue loss....but not indefinitely. Only French skirmishers and artillery were in action here as Lobau still shaped up for an attack while receiving some losses from rockets. The random nature of the rocket rules caused much mirth as we watched them fall. No adverse morale among the French resulted though.
The Young Guard occupied Plancenoit gaining the French 4 VPs.

Between La Haye Sainte and Papelotte two French Corps were advancing in tandem - Milhaud and D'Erlon, with the Cuirassiers at this point first forming up at the base of the ridge. Losses from artillery mounted though and one brigade quickly reached "tired" status. Picton formed his brigades on the ridge into squares. As the French pressed bravely on the Cuirassiers received severe casualties from rifle fire from LHS and canister from RHA on the ridge top and failed to dent the Allied line.

Initially Durutte's infantry fared better, for a while cresting the ridge, but eventually one brigade was repulsed.

On the French left the Carabinier brigade led Kellerman's assault but at that point the Earl of Uxbridge seized the day and counter charged at the head of Collaert's Division through Hill's squares resulting in a "major win" and sending the Carabiniers back where they were effectively finished by Horse Artillery. The remainder of Kellerman's cavalry formed up to threaten Alten's infantry.

I'll leave you with an overall view at about this point - around 3pm battle time but the end of our first day's play. 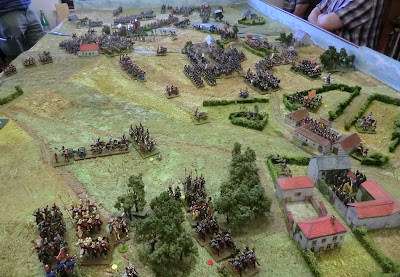